In hardly any other animal is the double morality in dealing with animals as clear as in rabbits.
On the one hand, dwarf rabbits are loved and cared for as pets. On the other hand, tens of millions of fattening rabbits throughout Europe have to spend their short lives until the time of slaughter in too narrow wire mesh cages.
The rabbits live like chickens in laying batteries. Even today!

The german Penny supermarket chain  advertises rabbit meat. And in a perverted way – because Penny calls this “BEST MOMENTS”!

Whow the  “BEST MOMENTS” in the slaughterhouse look like, we show in this video – it is indeed from the US, but slaughter, as we already know, are all the same! Cage farming is a reality for European fattening and breeding rabbits – therefore rabbit meat can be offered so cheaply.

The female animals are used as a litter machine and fertilized directly after birth, in 4-6 weeks there are new pups.
Due to the burden, the death rate is very high. A normal relationship with the young is not possible. It even happens that the young are eaten by the mother. Other consequences: Loneliness and boredom during gestation.

All this is everyday life in the rabbit barracks.

The problem for the surveillance authorities is that there are no legally binding minimum requirements for keeping, transporting and slaughtering rabbits, – neither at national nor at European level.  Only general rules on animal welfare in livestock farming can be applied.

The current federal government does not even consistently apply the Animal Welfare Act in order to dispel at least the most obvious and grave grievances in rabbit farming. Previous attempts to clarify the grievances failed. Criminal charges against commercial rabbit owners were unsuccessful!

In this regard, the rabbits are without rights and the farm owners are unscrupulous. In such cage batteries, which have been banned in Germany since the beginning of the year (from 2011 in the EU) for laying hens, there is no regulation of the rabbit fattening.

And what about the German fattening systems for rabbits? The video from the “German Animal Protection Bureau”  (Deutsches Tierschutzbüro) shows it, the pictures speak for themselves.

The animals suffer not only from physical damage such as paw injuries, spinal curvature, burnt eyes and metabolic disorders, but also from massive behavioral disorders. It starts with stereotyping how grating chewing continues with functional bursts of aggression such as trichophagy (tearing and eating their own hair) to the point of coronation (killing their own children), cannibalism and self-mutilation.

According to the animal protection organization “Four Paws”, 30 million rabbits (41,000 tons of meat) die every year in Germany alone, only to end up on the plate. Under what circumstances the animals reach their slaughter weight, apparently nobody seems to be interested in Germany. It has been known for the past five years that most rabbits come from tormenting intensive farms. Nevertheless, consumption and demand of rabbit meat is increasing rapidly.

In September 2013, a Mast Rabbit Ordinance was passed. On August 11, 2014, the regulations came into force. Unfortunately, these allow exactly the intensive factory farming on wire bottom.

We’re a long way from the finish. Improvements are urgently needed, so that no health and behavioral damage is caused.
The caging, also for rabbits must urgently be completely abolished.

Freewheel is urgently needed. For all Animals!

The petition endthecageage has already over 1 million votes. If you have not signed yet, you should do it now, it will soon go to the EU Commission! 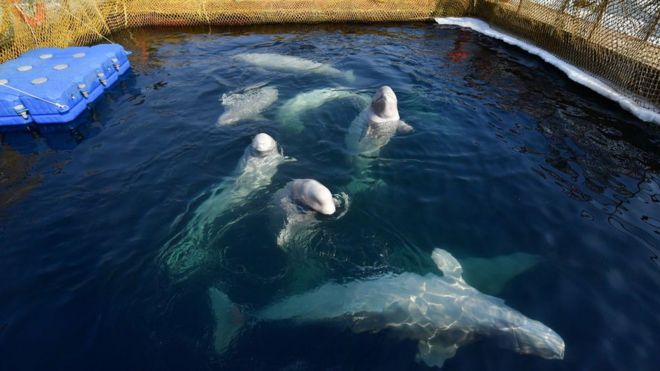 White Whale is one of four firms holding killer and beluga whales in small enclosures on the Sea of Japan, which they say is legal.

But a Vladivostok court on Friday ruled the company broke fishing rules.

Cases against the other three companies are expected before the courts in the next week.

Although Russia allows the capture of whales for scientific purposes, the fear is these animals are bound for theme parks or aquariums in China.

The confined whales have scandalised scientists, politicians and activists at home and abroad.

Environmental groups have demanded the release of the mammals ever since news of the “whale jails” first broke.

About 10 orcas and 90 beluga whales are currently being held at the facility.

The Russian government however seems to be bowing to pressure to end the practice. In February, President Vladimir Putin asked his government to look into the whale enclosures.

Authorities have since said the whales will be released, but it is not clear when.

Environment minister Dmitry Kobylkin this week said they would be freed in July or August, but officials had previously said this would happen in May or June.

MOSCOW (AFP) – A Russian court on Friday (June 7) fined a fishing firm for illegally capturing killer whales and keeping them in an overcrowded “jail” in the country’s far east.

The company that supplies sea mammals to aquariums is one of four firms keeping 10 killer whales and 87 Beluga whales in a controversial facility near the port town of Nakhodka.

Media have nicknamed it a “whale jail” due to its crammed pens and the company’s controversial plans to sell the animals to aquariums from nearby China.

A district court in the far eastern city of Vladivostok ruled that the White Whale company violated fishing regulations when it captured three killer whales, also called orcas, and ordered it to pay a fine of 28.1 million roubles (S$590,00), news agencies and activists said.

The fate of the Russian orcas and Belugas – highly intelligent and social marine mammals – has scandalised the international community, with scientists and celebrities calling for their release.Laws regarding the capture and keeping of marine mammals in Russia contain multiple loopholes.

The fishing firms have argued they had the proper paperwork and planned to deliver them to aquariums abroad.

The Russian government has promised to release the animals, but is not clear how and when this will be done.

This week, Environment Minister Dmitry Kobylkin said that the animals will be released in “July or August”, though previously officials named May or June.

Russia has for years been the only country where it is legal to capture live killer whales, most of which are the seal-eating variety of the species that scientists say is rare and must be protected.

People increasingly oppose using such sea mammals for entertainment in the West, but in China the industry is booming and many new facilities are under construction.