France bans all animal transport until the end of the heat wave!

Because of the ongoing heat, animal transport in France has been banned for the time being. “Yesterday (Wednesday) I ordered to ban the transport of animals because we can not leave the animals in trucks and trains,” said Minister of Agriculture Didier Guillaume the station BFM TV. He had therefore prohibited animal transports for a few days. One will see in the coming week, if the heat decreases.

This is a perfectly understandable and empathic decision of France!

Even France is groaning since the beginning of the week under a heatwave.

According to the Météo France meteorological service, the heat is exceptional – firstly because of its early beginning in the month of June, secondly because of the pronounced intensity during the day and at night. Regional meteorologists expect more than 40 degrees. It is hot especially in the southeast of the country.

And in the rest of Europe?
The madness with the animal transport under this extreme heat continues. In Germany, for example. The German government has neither the courage nor empathy to put the welfare and life of transport animals over the economic interests of the animal exploiters!

And the animals are transported in glowing coffins at 40 degrees. With the blessing of our Minister of Agriculture, Julia Klöckner!
Our Agriculture Minister Julia Klöckner has no interest in animals at all. She is a friend of the slaughterhouses, a friend of the hunt and represents only the interests of the farmer and the meat mafia. And especially immune to hatred and rejection of millions citizens of her country.

We lose a acre and a half of forest EVERY SECOND.

That is 15 Billion trees a year.

A new tree planting drone has been developed by an Australian company.

Watch the video and be impressed ! 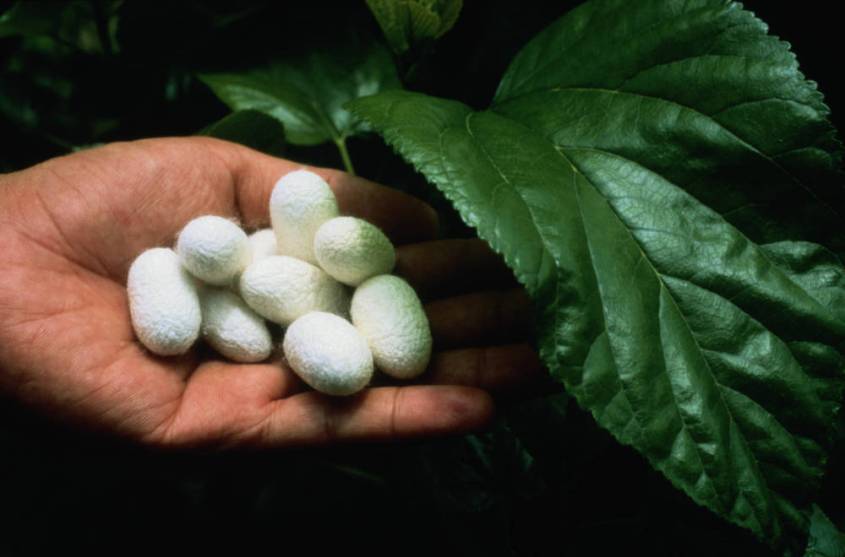 Silk is an animal fiber that consists mainly of proteins. The material is made in small glands in the mouth of the silk spinner. The caterpillar wraps itself in and forms a protective cocoon around her body. Then she pupates and turns into a butterfly.

In 2014, about 178,000 tonnes of silk were produced worldwide – mostly in China, India or Uzbekistan. If you now realize that about 50,000 silkworms are killed for a silk dress, it’s worth taking a closer look.

In order for the silk to be used economically, the silk caterpillar was domesticated in China over 5,000 years ago. The result was the mulberry spinner Bombyx mori. It has been bred for high performance, feeds mainly on mulberry leaves and is not viable in nature as it is extremely sensitive to changes in its environment, such as temperature fluctuations. In order to be able to control the animals better, their flying abilities were also bred away. In addition to the mulberry spinner, other butterfly species such as the Japanese oak silk moth are used, but their cocoons make up only a small part of the world’s traded silk.

How is silk made?

The silk moth is the main producer. More precisely, it is his larva. She is tiny shortly after birth and then eats the leaves of the mulberry tree in only four weeks (and four molts) 14 000 times her hatching weight.

She is fat like a finger before she starts pupating. Instead, it produces a thread in its oral glands, which consists of fibrin, a horn-like protein. She sticks it to sericin, a glue. First, she weaves a net between branches and blades of grass, anchoring her cocoon, which she spins out of a single thread that can be rolled out up to four kilometers long.

In this cocoon she rests – and normally after about 18 days a woolly white-haired butterfly would hatch. But this does not happen in the silk breeding, because when hatching, he would bite through the endless silk thread and tand break the thread, which no one silk collector wants. He wants the thread as a whole.

To prevent this, the cocoons, together with the living dolls, are exposed to dry in the sun or thrown into boiling water. You can watch how the animals crawl around in their cocoons and try to escape death.

A few animals may hatch from their cocoons to mate and lay new eggs, which are needed for the offspring. Superfluous eggs are destroyed or frozen. Male animals are often stored in freezers and brought out only for fertilization. When they are no longer efficient, they are disposed of like garbage after mating. The dolls killed in the water bath are also disposed of and eaten in some countries like Korea.

Most of the animals are bred today in China, India and Uzbekistan. After the silk moths have been killed, the silk threads are rolled up by machine or by hand to a yarn and lavishly cleaned and freed from the natural glue residue of the silk moth. After that, the silk is dyed, processed and sold as clothing, accessories or rugs in stores around the world. Since about 15 animals are killed for one gram of silk, this means the death of more than 2.8 trillion caterpillars annually with a world-wide production of 192,692 tons of silk (as of 2016). Although the production of silk costs so many animals its life, it accounts for only 0.2% of all textile fibers, making it terrifyingly inefficient. 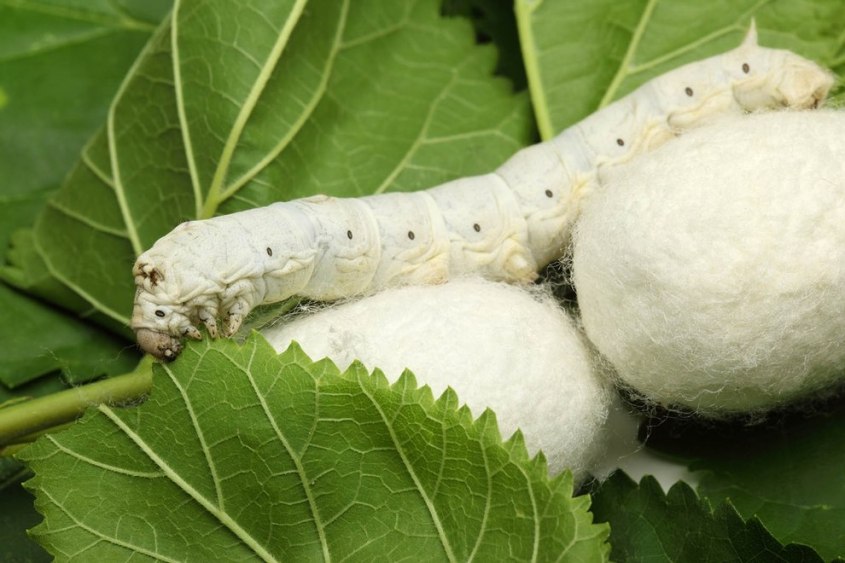 So far, the ability to suffer from invertebrates is poorly understood – the simplified answer is: We still do not know exactly if and how caterpillars and butterflies feel pain. However, it is known that some insects show pain-avoiding behavior and evade negative stimuli. Hummer was also denied pain for a long time. Today we know that lobsters feel very well when they are thrown into boiling water. Due to the increasing knowledge, the pain sensation of invertebrate animals, such as insects, it is our responsibility to protect the silk moth from suffering and pain.

Anyone who opposes the use of silk products does not have to do without the qualities of silk. Almost all textile and fashion manufacturers offer microfibers such as nylon or polyester, which perfectly mimic the sheen of silk. The flora also has a lot to offer.

Anyone who opposes the use of silk products does not have to do without the qualities of silk. Meanwhile, there are a number of fibers that wonderfully mimic silk in softness, smoothness and thermal qualities. Lyocell is one of these, micro modal as well, or rayon, soya silk and agave or bamboo silk.
Pima cotton is particularly fine and convinces with its shimmering surface. Kapok, agave fiber and soy-based can also be processed into delicate fabrics. Eco-friendly Lyocell fibers such as Tencel or Modal, which feel light and soft on the skin, are also trendy.
In contrast to animal fibers, these materials also do not attract clothes moths and carpet beetles, which feed on the protein fibers of the silk and perforate the textiles.

Biotechnological processes even allow the imitation of the silk protein. Companies such as Spiber, Amsilk or BoldThreads make the silk protein of yeast cells or bacteria and thus copy the properties of animal silk. In the end, this creates a silk yarn that can be used not only for clothing, but also for medical purposes and many other areas. The procedures are completely free of animals and could save many billiards of silk spinners in the near future.

My comment: Silk is the only textile fiber for which live creatures must be killed in order to gain them, namely the caterpillars of the silk moth.
And I have no doubt that animals that find death in boiling water feel pain.
Whether they are lobsters, cocoon dolls or pigs.
They are enslaved, exploited, cooked alive because a two-legged animal wants to have his kimono from China silk.
It is high time we, the human animals, finally civilize ourselves.

“On June 5, a resolution was introduced in the Los Angeles City Council, asking the governments of China, Vietnam, South Korea, Cambodia, and Indonesia to ban the sale of dog meat and to enforce their animal cruelty laws. The resolution was introduced by Councilmember Bob Blumenfield, a very strong advocate for animal welfare, and seconded by Councilmember David Ryu, one of the most influential Korean American office holders in the country.”

He also mentioned South Korea’s “very close ties to Los Angeles” and the Los Angeles sister city – Busan. We have campaigned to urge Los Angeles to speak out against the cruelty of its sister city and other friendship cities in Korea. Click HERE to see our campaigns.

Let’s help pass this resolution by expressing our support!

Click HERE to learn more and take actions (from article). 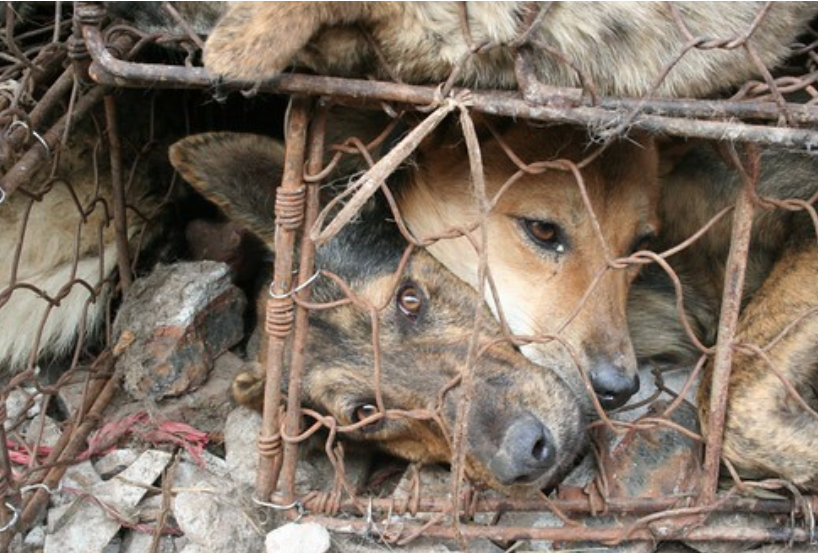 Read a lot more current news about the Korean dog meat trade by clicking on the following link:

We needed 5 yes votes out of the 9-person committee, and we were stalled at 3 without much time left. A few of us went around the State Capitol lobbying the remaining Senators and even chased the Senate Majority Leader down the hall to speak to him in time.

With just minutes left, we got the last two votes we needed, and the Senate Majority Leader threw up his arms in support when the victory was announced!

When the votes are this close, a single action can tip the scale on either side.

The fur industry has hired a new lobbyist and they’re going to extreme measures to block the bill. We need your help more than we’ve ever needed it before. We’ve uncovered a disturbing new tactic the industry is using — one that almost killed the fur ban yesterday. And to win in the next Senate vote (in 2 weeks), we’ll need your help.

Can you make a post on social media with #MakeFurHistory to show your support for the bill? You can also direct your friends and family to sign up at FurIsHistory.org and they’ll learn more about how they can help, too.

We’ll also be sharing more updates on the fur ban in the July member call. If you want to become a member and join these more in-depth monthly discussions, you can become a member here.