It is a dark chapter in the story of which you may have never heard of it: until the year 1958, people were exhibited in so-called human zoos. – Yes, that’s right. The often fenced areas were often placed between animal cages. Occasionally with the note: “Please do not feed.”

Already Christopher Columbus abducted hundreds of Native Americans to Europe and exhibited them on Spanish fairs. Most natives did not survive this crossing.
The “heyday” of human zoos was heralded by the pet trader, the German Carl Hagenbeck in 1874, when he presented his first folk exhibition to the world.

For his peoples shows, he shipped “exotic” – looking people along with animals and objects to Europe and built zoo worlds that had little or nothing to do with reality.
Thus he activated already anchored clichés. The zoo visitors were interested in “wild”, “uncivilized” people in their “natural” environment (or what they thought was just that). Hagenbeck staged exactly that. He made a lot of money when he showed exposed women, pregnant women or people with physical deformities.

Scientists of that time used these unworthy and inhumane human zoos for their purposes.
They introduced the race doctrine in which people of white-skinned were given a place of honor and other cultures were considered inferior. In addition, they played colonialism in the hands. The false and degrading accounts were used to explain why one had to “save” these cultures and “protect” themselves from them.

To put people behind bars symbolizes power and superiority.

The big deal with the suffering of others

Like wild animals today, people were seen as unemotional exhibits.
Even if the human-animal comparison needs to be handled sensitively, a look at the history of zoos may make it clear how reprehensible it is to earn with the suffering of sentient beings.
Even today, animals are staged in unrealistic prisons – and that throughout their lives. They also want to lead a self-determined life in freedom. In captivity they are exposed to severe mental suffering. Many develop stereotypes or mutilate themselves.

We also believe that zoos with animals must finally close, because these undignified and unsuitable conditions do not fit into an enlightened and compassionate society. So we know how intelligent and highly sensitive animals are.
It can not be that our own entertaining conversation is still about the lives and suffering of others today.

My comment: The owners of the zoos today defend their business by arguing that it serves education and research.

Their false arguments are so hollow, in fact false and implausible, that they can not convince a single person with reason and education.
It is only embarrassing and tragic that they find again and again some dull mentally weak proletarians who visit these prisons.

In addition, it requires a large dose of stupidity and indifference that one parent selects the zoo as an educational site for his offspring, makes selfies with the animals, and teaches his children that for these animals the only way of life is captivity, monotony, one tight cell and the degradation of their existence to show objects.

We can only change the future if we learn from the past.
And if human zoos are now a thing of the past, animal zoos still exist today, showing that our dealings with the “others” are still rooted in the fascist ideology of the stronger.

It started off as a ‘normal’ kind of day; with things planned, computer / site stuff etc; but soon it turned upside down.

So there I was at first sitting in the office doing the new software ‘things’ for the computer; when in walks a fox and jumps up onto the window sill in the office ! 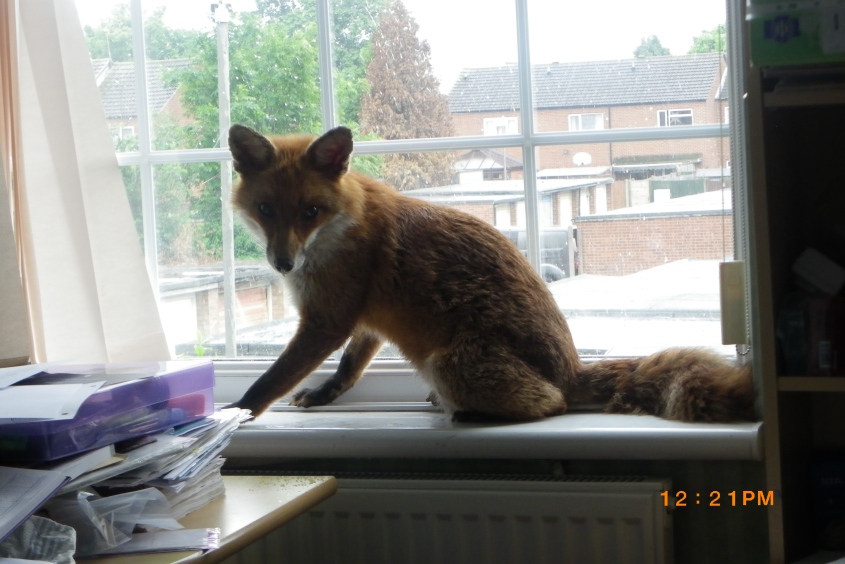 I looked at him; he looked at me –  I wanted to stroke his head but declined – he is a wild animal.  So I carried on with the download; he sat there watching me; sometimes looking out into the garden.

He sat about 60cm away from me – real close as you can see – within good touching distance.  But I declined – we made eye contact many times; I sat in my chair; he was on the sill.

It is one of my ‘regulars’ that comes round into the garden every evening, I can tell from the colouring and especially the tail markings (nice healthy Brush), but this is the first time something like this has happened.  Not every day a fox walks into your office and makes itself at home by the window.  I used to do fox recue, but wondered if he was ok.

After a while and a phone call; I got out a friend out from the brilliant Fox Project who are here in Kent, http://foxproject.org.uk/    they caged him; fully checked him over, then took it out the front door and released him.  Real Animal Liberation !

He had, No injuries, no problems; just an amazed Marky. There he was with me in the office like a pet dog; me sitting there downloading software, and him just looking out of the window or at me.

I had to grab a few shots of the Foxy visitor or people would say I am telling bullshit !

I love foxes a real lot and take many photos of them in the garden; but this is going a bit far when they stroll in and pose on the inside window ledge of the office ! – they must keep their distance, be wary of humans really; not make a regular of sitting alongside me in the office; after all, they are wild animals.

It was enjoyable, but not everyone loves foxes as I do – so off you go mate and keep being sly and keep your distance !

One of my ‘normal’ shots – outside in the garden !

The entrance stays closed a bit more from now on !

PS – in the end I got the printer sorted after all this; over 3 hours later than planned, but sorted.  But an all round different, enjoyable day.