This week we (WAV) have attempted to make contact with Blackthorn Safaris to make our disgust at what they are doing audible to them. They cannot be contacted in any way; and all of their sites appear to have been shutdown; hopefully due to the amount of mails and telephone calls that they have been getting from irate animal supporters. Here below is the basic story; but this has appeared in many UK national newspapers in the last week. Maybe it is this also that has caused Goss to close down all the sites.

Just for once he is now experiencing what it is like to be ’hunted’ – I am sure that there are many people in the UK that would wish him harm. – WAV England.

This pile of crap is an insult to the great work which is being done everywhere by UK animal welfare organisations.  He and his organisation are an offence to the good name that these groups and people have worked years to achieve.  The UK disowns shit such as this.  We hope he has a severe accident with his gun in the very near future.

Some UK press links about this:

Alex Goss, who owns the Shropshire-based firm, posted several sickening photographs on the company’s website, picturing him with the innocent animals he and his guests have cruelly slaughtered. It is believed that the lions in the photographs were specifically bred in captivity to be mercilessly hunted down within fenced estates, leaving them with no chance of escape.

Throughout South Africa there are approximately 10,000 lions in more than 300 breeding and captive hunting centers. 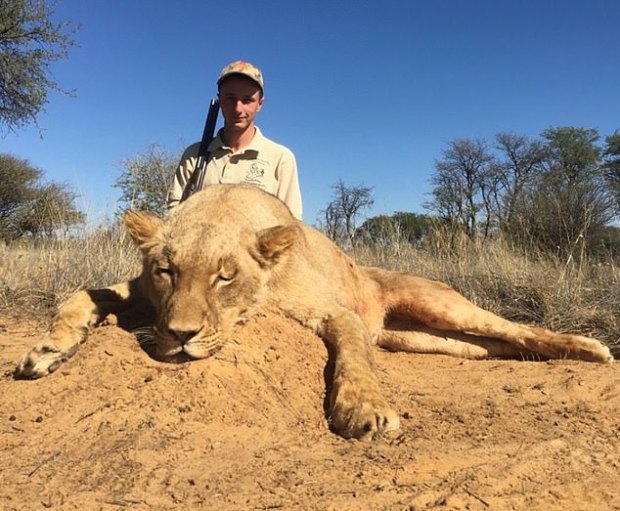 Calling canned hunting “cowardly”, Eduardo Goncalves, founder of the Campaign to Ban Trophy Hunting, which exposed Blackthorn Safaris’s gruesome practices, explained how lion cubs are taken from their moms just hours after birth, then raised in captivity to be killed for “entertainment”.

“In the shocking world of trophy hunting, there is nothing more depraved than captive lion hunting,” he said. “For a British company apparently to be actively organizing captive lion hunts will make people sick to the stomach. The Government should ban the import of hunting trophies, help close the loophole in international law which lets hunters shoot endangered animals for “sport” and support moves to abolish all trophy hunting”.

Canada is the first of the G20 countries to fully ban shark fin trade.
This is a significant issue, as Canada was once the largest importer of shark fins outside Asia (according to Statistics Canada, in 2018, 148,241 kg of shark fins with a market value of over EUR 2 million were imported). Will other countries now follow suit and help prevent the slaughter of millions of sharks a year for a bowl of soup?

Other countries have also issued bans on finning; these include Ecuador, Malaysia, USA or New Zealand. However, the prohibitions are often undermined and practically not monitored in the vast expanses of international waters.

Shark fins are still traded worldwide despite the brutality of the catch.
According to the Food and Agriculture Organization (FAO), Indonesia is the largest shark exporter with 13 percent of world shark. Spain follows as the first European country in third place worldwide.

Giant sharks reach a size of up to ten meters in length, and their fins are up to two meters long. Such fins can reach prices up to $ 15,000. The Great White Shark has other “souvenirs” that can be used to make money.

The international trade with its jaws and teeth reduces the population’s concern. There are already sums of money: the jaws bring a revenue of up to $ 50,000 and a single tooth an average of $ 60.
Due to increasing demand for their fins, 100 million sharks are killed each year. 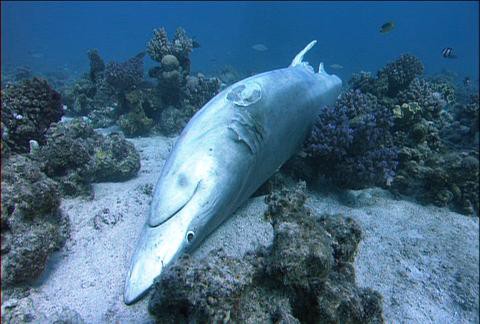 The brutal “shark finning” has long been severely condemned by environmental and animal welfare organizations. The sharks are caught alive with longlines and taken aboard.

There, the fins are cut off from the living animal. Then the shark is again thrown overboard into the water.
The animal is miserably destroyed. Without movement no oxygen-rich water gets into the gills, the shark suffocates.

My comment: And we’ve been told that shark is a monster, the most dangerous animal in the world.
Around 70 people are attacked by sharks a year. In the year 100 million of these intelligent animals die a tumultuous death from human hand.
Most grotesque is that only 4% of their body, the rafts, are eaten, the rest is “waste”, does not bring money and ends up as a waste in the sea.

End product rafts for shark rafts soup, and we have
A tragedy with 100 million victims a year and 180 shark species on the red list.
The human species is an animal species acting in principle with the  fascist ideology of the ruler, and therefore the most dangerous and abominable species on this planet. 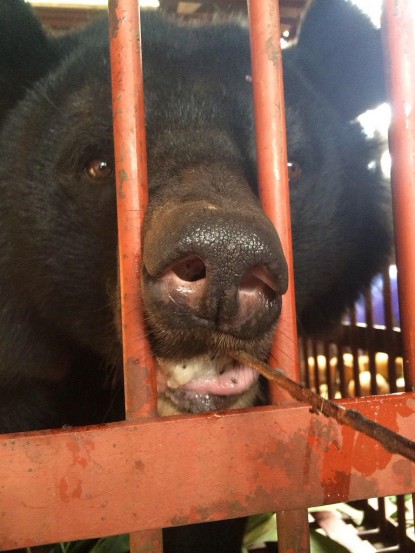 We need to get them urgently, so they’re not sold on to a bile farm. The bears have been kept on display to visitors, but the resort owner now wants to end the bear display.

As soon as we heard, we knew we had to act quickly… So after frantically preparing vet supplies and permits, and hiring a truck and support bus, we’re now on the road…

… and tomorrow these precious bears are coming home with us.

Can you donate to help get them home? A gift of £15 would be a big help in covering their transport costs. 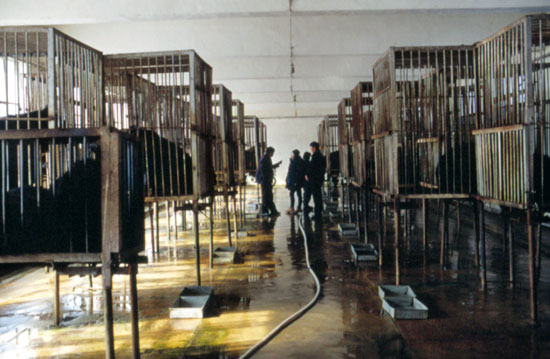 If you’ve already given to these four precious bears, thank you so much! Your kindness means they’ve avoided the worst possible fate. If we weren’t able to get these poor bears, they’d almost certainly have ended up being exploited for their bile…

Never let out on the grass…

Drugged and poked with needles…

But thanks to you, we will get them home.

These four bears have probably had no veterinary care their whole lives. Please can you help to get them home so they can get the care they need? A gift of £15 would mean so much.

It’ll be a gruelling three-day road trip in hot and humid conditions, but we’ll make the bears as comfortable as possible. Giant banana leaves to nest with… delicious fresh fruit to munch on… cooling hose showers… and pain relief for those who need it.

These beautiful animals deserve all the care we can give them. I know you feel the same.

We’ll keep you updated on their progress, and meanwhile we’ll give them your love… because without your love and support, these bears would surely be destined for a bile farm… instead they’re coming home.

With thanks to Stacey for sending –

For its third consecutive year, animal liberation groups around the world have coordinated the release of a brand new video giving you a look into the growing movement for animal rescue – and introducing you to nine animals whose lives have just changed forever.

The face of an individual that has lost all hope.
Mistreated by those who were supposed to care for them—and now headed to their death.
How and why are we doing this to others when there is absolutely no need for it?

The answer: Because we are the perpetrators.
Because we only recognize rights for our species.
This is the right of the stronger that allows us to become perpetrators.
Humans have rights, animals have no rights.
No animal in this world has rights, nowhere.

There are many moral reasons to give the other species the right to life, freedom, happiness.
Every human being gets these rights at birth, the species gives the rights to itself.
And that favors the winner, that gives his privilege over other species.

That’s the answer to the question.