THE bodies of dead whale calves and their murdered mothers lined the beaches of the Faroe Islands following a torturous five-hour hunt. 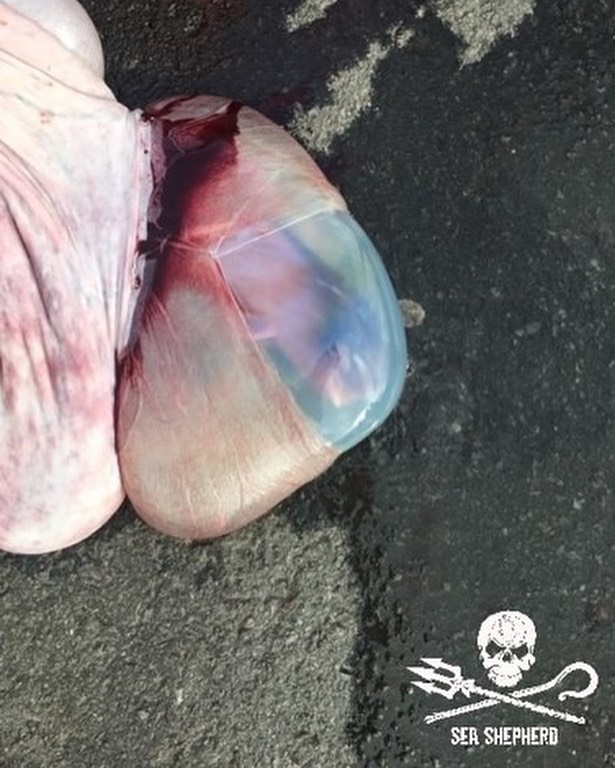 Above – a baby calf whale still inside its mothers sack dies with the mother.

The killing spree took the lives of 94 innocent creatures, with distressing images of the babies being shared by a charity to raise awareness.

Click on this link to watch the disturbing video: 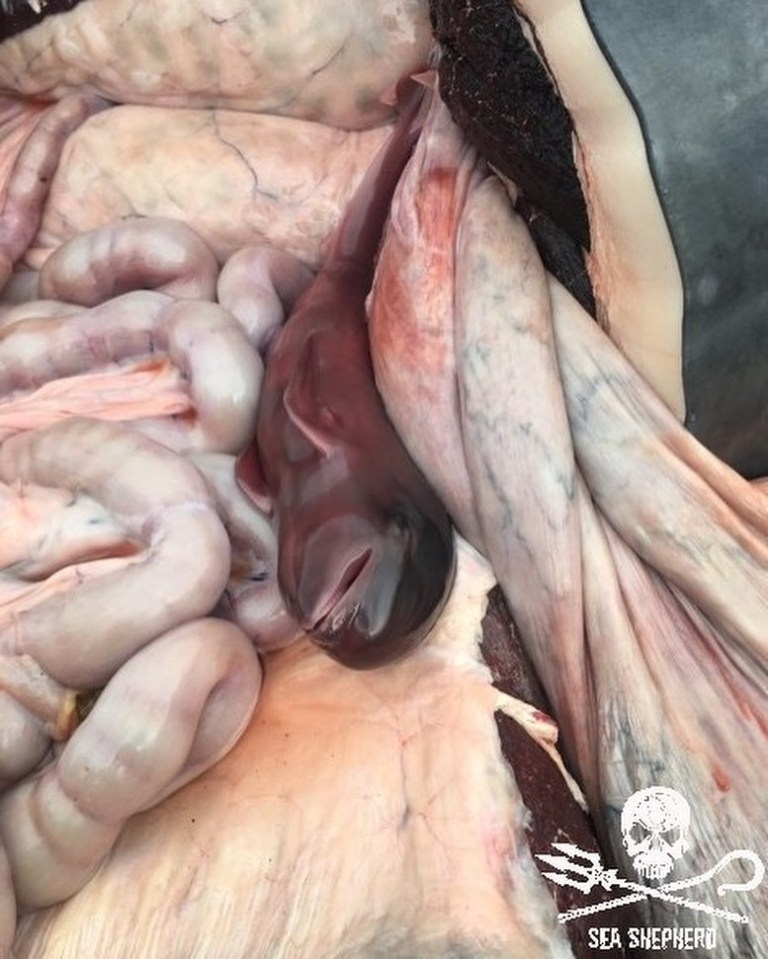 This is the eleventh hunt this year – with over 600 pilot whales slaughtered in so far in 2019. 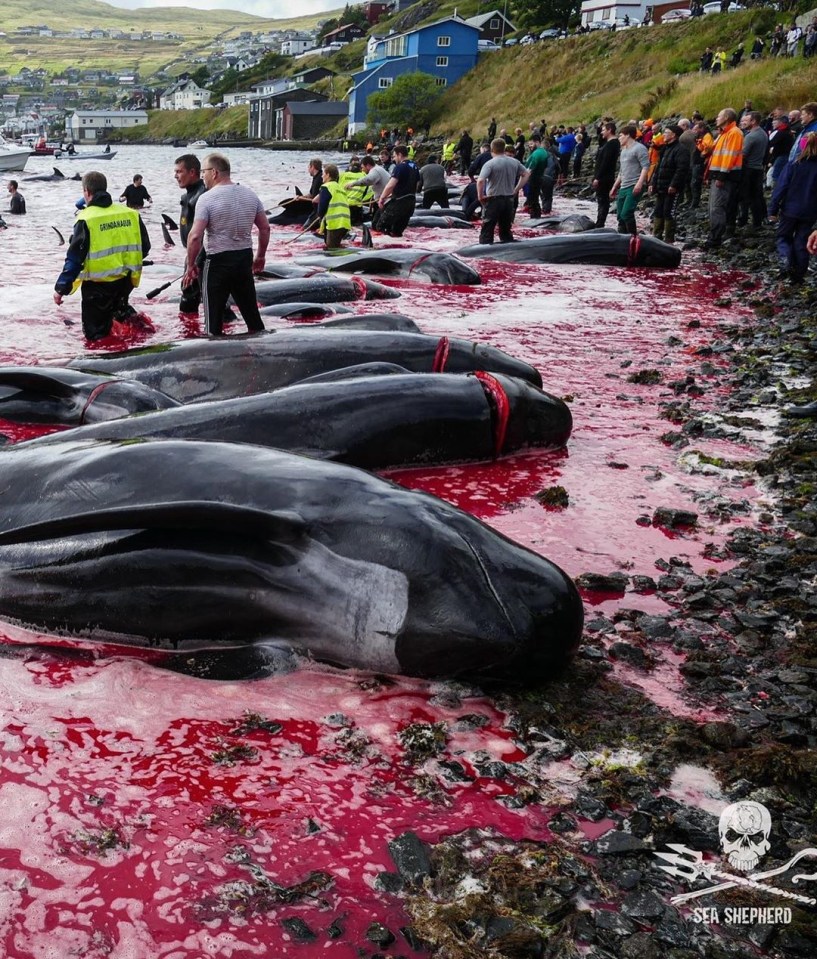 Sea Shepherd, a non-profit sea conservation charity, were there to document the slaughter in the islands in between Iceland and Norway.

The hunt, also known as ‘the grind’ lasted for more than 5 hours with the Faroese boats harassing and chasing the pod of whales.

The killing of the creatures, who are not yet identified as endangered due to the lack of documentation, took 12 minutes.

OVER 600 KILLED THIS YEAR

Other pictures captured by the charity show the dumping of the remains of the whales back into the sea with some people questioning why it happens in the first place.

One Instagrammer said: “Such a waste, they literally died for nothing.”

The whales are allegedly slaughtered for their meat and blubber and often tourists will watch as the sea turns red with blood.

This centuries-old tradition helps feed the population of the remote Atlantic island over winter with the Faroese locals claiming it is sustainable and regulated by law.

But campaign groups say it is inhumane and want the hunts banned. 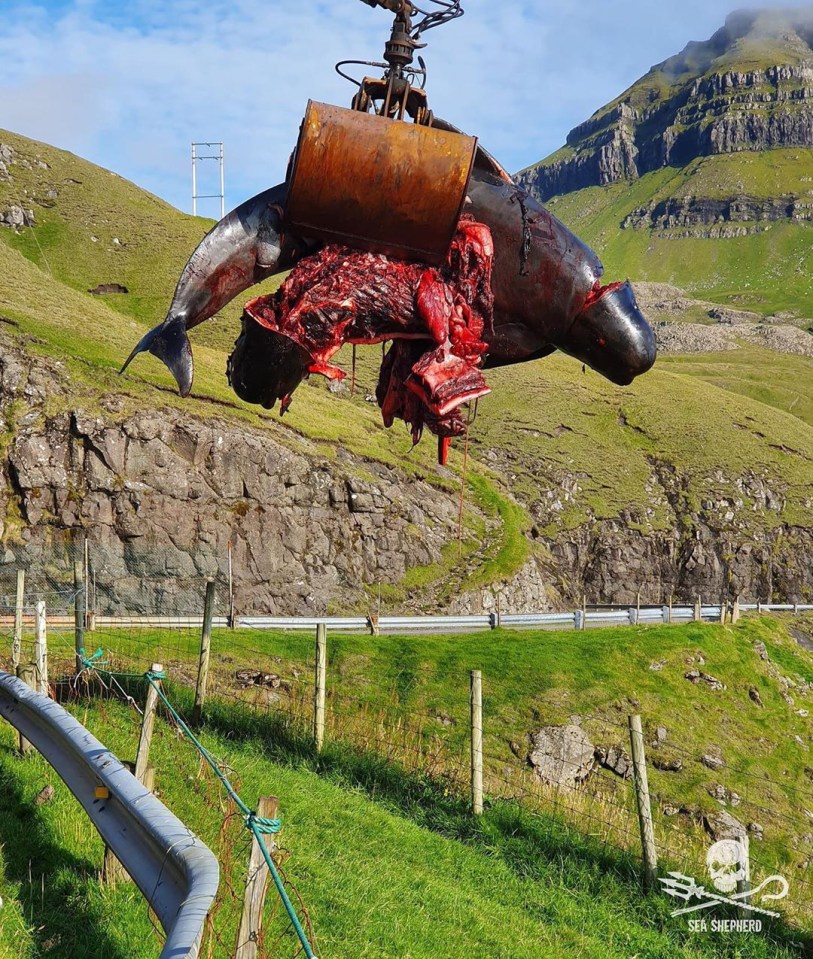 THE grind, or grindadrap, is a yearly whale hunt that takes place on the Faroe Islands.

During a grind, a flotilla of small boats drives whales or dolphins into a shallow bay where they can be easily killed with knives.

Grinds are the longest continuously practiced and relatively unchanged whaling tradition in the world, says Russell Fielding, a geographer from the University of the South in Sewanee, Tennessee.

He has studied the Faroe Island grinds since 2005.

“They do feel a real cultural attachment to [the grinds],” notes Fielding. “However, the Faroese are quick to point out that it is for food primarily.”

The meat can be boiled, broiled as a steak, or air-dried, says Bjarki Dalsgarŏ, a 28-year-old Faroese who has participated in grinds.

“Air-dried whale meat is quite common and is considered a bit of a delicacy,” he notes.

It is usually eaten raw in thin slices. In his family, the blubber is eaten as a side, along with potatoes.

Speaking earlier this year, a spokesperson for the campaign group said:  “Over the course of the lengthy drive more and more members of the public and tourists could be seen stopping along the coastline to watch the family of pilot whales struggle and resist.

“As is often the case, the grind was swiftly becoming a social event with parents laughing and chatting as children played on the killing beach.

“The level of excitement was clearly growing as anticipation of the brutality came closer, epitomising the social aspect of the grind was the sight of a youth group – possibly a guides or scout group – sat eagerly watching and waiting.”

“Grind participants ran cheering into the pod to start attaching ropes and pulling individuals out to begin slaughtering.

They added:  “Though, as usual, the ‘humane’ process of killing the pilot whales was far from it, with multiple unsuccessful attempts to paralyse the with the lance were observed on a number of the pod.

“Having previously observed other pilot whale drives our crew noted that this pod had clearly been worn out or resigned to their fate as little to no cries were heard from the pod.

“As the family were laid out on the docks the all too familiar and disturbing images of children jumping on and playing with the dead could be seen.

In September 2018, the charity offered the Faroe Islands 1 million Euros for 10 consecutive years with no whale hunts but were rejected.

WAV Comment – Back around 1991 Jo, I and Trev were out on the streets campaigning about this slaughter – trying to get supermarkets to boycott fish from the Faroe Islands.  You can see us in the picture below.  Today, what some 30 years later, this blood lust is still going on.  As usual, the EU SAY NOTHING AT ALL about this – which just proves how crap they are.

Below – Myself, Joanne and Trev on the streets in 1991 campaigning about this.

Well to date there is no victory, but in the end the Danes will be ashamed about they are being portrayed the world over – then they will do something about it.  I just wish our actions in 91 had done something – a lot of beautiful, innocent whales have died ever since.