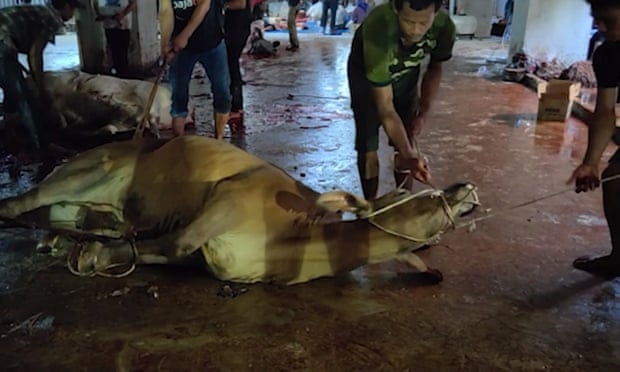 Exclusive: An investigation is under way after cattle were allegedly sold illegally outside supply chain

The Department of Agriculture is investigating a live export company after it received footage showing Australian cattle being pulled to the ground with ropes and slaughtered without being stunned in a carpark underneath an Indonesian mosque.

International Livestock Exports has suspended all supply to one of its Indonesian abattoirs over the breach, which was reported to the department by Animals Australia.

ILE identified itself as the exporter after the department shared the footage it received from Animals Australia with all relevant exporters, in an attempt to identify the cattle.

The footage, seen by Guardian Australia, shows about a dozen cattle in an underground carpark near the grand mosque in Medan City in North Sumatra. They were killed as part of Eid al-Adha last month and a complaint was lodged with the department on 13 August.

Four of the cattle were identified as Australian. The footage shows them being pulled to the ground by ropes around their legs and rope halters, then being dragged by their tails. The slaughter happened in full view, and sometimes within metres, of other cattle.

Ear tags had been removed but a combination of ear notches and brands identified them as cattle produced on a station in the Northern Territory and shipped to Indonesia by ILE.

The slaughter was reported to the department as a breach of the Exporter Supply Chain Assurance System (Escas), which was introduced after a 2011 Four Corners investigation. Exporters dealing in Australian animals can sell only into an approved supply chain

A director of ILE, Mike Stanton, told Guardian Australia the cattle had been illegally sold outside the supply chain from a facility in Indonesia, and ILE had suspended the facility it believed was responsible. “We did that as soon as we were able to work out where the leak has been,” he said.

The department told Guardian Australia it did not comment on investigations that were still in progress.

Legislation to appoint an independent inspector general for live exports passed the Senate on Tuesday.

Stanton said there were 140 facilities in Indonesia approved as part of ILE’s supply chain. “If you’re exporting a lot of cattle there’s going to be issues along the line,” he said. “We do our best. “I know a lot of people think we don’t, but it’s bloody hard.”

He said the treatment of the cattle shown in the footage, particularly the long minutes taken to drag them to the ground, was “awful”.

“We are in the business of selling animals for slaughter but we want it done in an appropriate manner,” he said.

ILE shares an office in West Perth with Emanuel Exports, the company responsible for the 2017 voyage of the Awassi Express in which 2,400 sheep died of heat stress.

An investigation by the department into allegations Animals Australia paid for the footage from the Awassi found no evidence to suggest the footage was manufactured or illegally obtained.

ILE was issued a show-cause notice in October because of its association with Emanuel and another sister company, EMRS Rural Exports, which both had their export licences cancelled. ILE handles 70% of live cattle exports from Broome.

The Australian Live Export Council chief executive, Mark Harvey-Sutton, said the slaughter was “unacceptable” but had to be put in context of the industry’s broader track record.

“Let’s not forget that exporters are also very proactive in this space and often actions are undertaken by exporters ahead of what the regulator looks to do, and that was the case this time,” he said.

Harvey-Sutton said Australian exporters had “very good systems in place” and the council worked “very closely” with both producers and exporters to keep them informed in cases of Escas non-compliance.

There have been 172 complaints of non-compliance since Escas was established in 2012 – 70 by Animals Australia.

Its strategy director, Lyn White, said: “It is deeply concerning that Australian cattle have once again been subjected to roping slaughter in Indonesia, and that the only reason this has become known is because of the efforts of a charity.

“Escas was established to prevent such horrific treatment. The fact that it can still occur speaks to the ever-present risks of exporting animals and losing control of their welfare.”

White said Escas breaches should result in the automatic suspension of an export licence.

A review conducted by Guardian Australia of the first five years of reports found only three cases in which punitive action was taken against exporters.

Self-reported breaches by exporters are not publicly listed and investigated if they are made and rectified within a set timeline.

The chief executive of the Northern Territory Cattlemen’s Association, Ashley Manicaros, said the slaughter involved just four of the 400,000 cattle exported from Darwin to Indonesia each year.

Manicaros said exporters should be given more credit for the work they had done to reform after the crackdown in the live sheep trade.

“Those operators that don’t meet those standards will be the ones that have to get to the standard if they want to remain in business,” he said.