The city of New York has now banned the sale of foie gras. We are happy, very happy and hope that other states and countries will follow the example of New York!

The City Council of the US metropolis voted on Wednesday to pass a bill banning the sale of foie gras from October 2022 onwards. In case of violations penalties should threaten between 500 and 2000 dollars per offense.
The bill still has to be signed by Mayor Bill de Blasio.

“This is a historic day for the rights of animals in New York City,” said Matthew Dominguez of the animal rights group “Voters for the Rights of Animals”.
On the other hand, foie gras producers announced legal action against the ban. 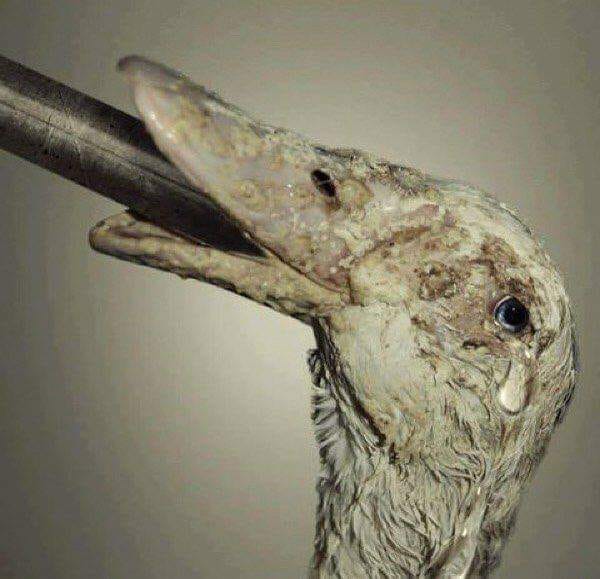 “We’ll give them a kick in the butt in court,” said producer Hudson Valley founder Foie Gras Izzy Yanay. “I have 400 people who have been working for me for 30 years, and these people are suffering a tragedy.”(!!!)

It was not until January that the US Supreme Court upheld a ban on foie gras in the state of California following a 15-year lawsuit.

While foie gras is regarded as a delicacy by gourmets, animal rights activists criticize the fact that ducks and geese have to suffer during fattening: Before slaughtering, the animals are forcibly fed on grain for several weeks until their livers are completely fat-choked to multiples.

In France, the stuffing mast has been protected from prohibitions since 2006: foie gras was then declared a “part of the cultural and gastronomic heritage”. The foie gras is a traditional Christmas meal for many Frenchmen. The production of foie gras is already banned in some countries, including Denmark, the United Kingdom and Australia.

The video shows farms with force feeding in China but mainly in France. And the final station for the animals in Hungary`s slaughterhouses.

My comment: Forced feeding is prohibited in Germany. However, the sale and purchase of goose liver pate is allowed. Also works in every delicatessen and even in the best supermarkets.
We import the animal cruelty from next door, from our neighbors French, and criticize them, why they torture geese in that awful way!

I don`t know if every “gourmand” knows about the brutal force-feeding process:
Torture takes three weeks for geese and fifteen days for ducks.
The feeding lasts three seconds and is fed up to 400 animals per hour.
Injuries in the esophagus are very common.
The amount of food increases from time to time, the liver thus reaches ten times the size.
Many animals die violently.

The animals are pumped several times a day with 1.5 – 2.0 kg porridge into the stomach and try desperately and painfully snap to air.
Their eyeballs are swollen because of the physical pressure.
Even for us humans 1.5 to 2 kg of food are too much, most of us would rather surrender than tolerate, let alone a comparatively small animal. 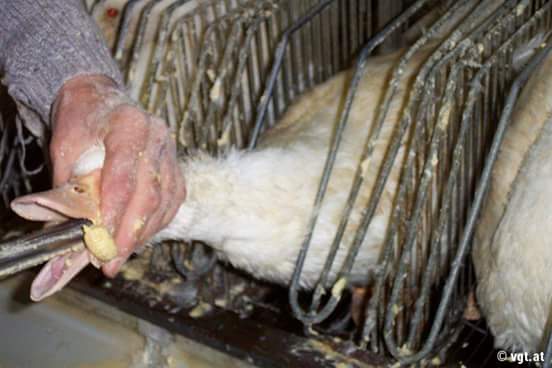 If the “gourmands” still don`t understand how sadistic and barbaric this feeding is, they can throw their foie gras heritage into their stomach in the same way.

For a highly civilized country like France, it is a shame to declare foie gras as part of its cultural and gastronomic heritage.
Sadistic animal cruelty, that is!
No more and no less!