WAV Comment – Mark (England) – I can vividly remember when we had CJD here in the UK years ago – primarily due to the farming industry thinking they knew how to feed cows better than nature, by feeding ground up chickens to cows, rather than putting them out to feed naturally with grass pasture.   What is learned ? – in the end, no matter how brilliant humans think they are, with the attitude of man knows best; nature will always find a way of getting back at us – a sort of ‘Karma’ for the devastation we inflict on other species and the environment.  In one sense, this is a way that Deer hunters are now being sent a message to stop doing what they do – especially as the disease can be spread by bodily fluid contact (animals to humans).  From CJD experiences I have seen in the UK from the past; USA, your troubles are far from over !

Venus and I have reviewed this today, and we agree that our concerns are not so much about the widening of the disease, but what measures the US government and authorities may take to control it and stop expansion.   It can probably be summed up in one simple word – ‘shoot’.  No doubt the hunters are rubbing their hands at getting out there to slaughter anything and everything that they can; without thinking of the consequences !

Because no matter how it goes and how big the number of illnesses will be, the method is always the same with the animals: Shoot to kill ! 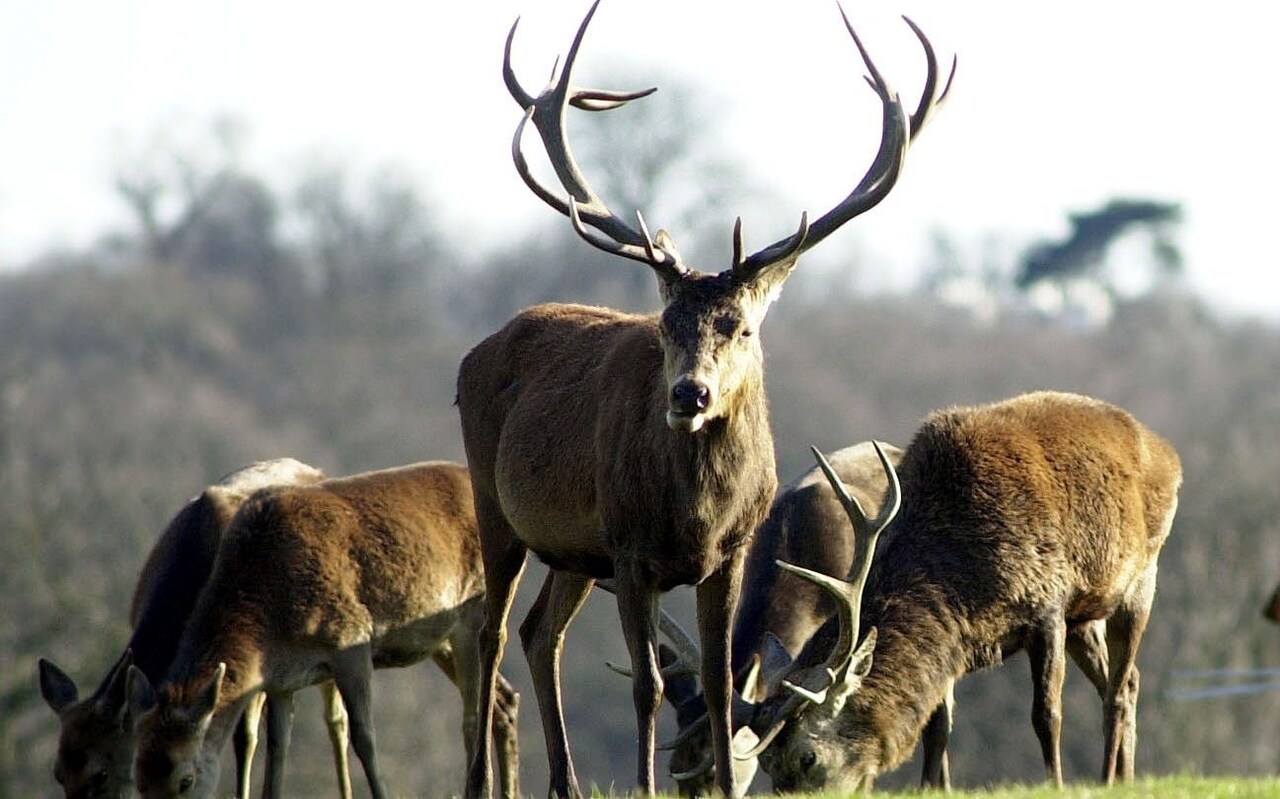 The deadly disease has already been reported in 24 US states Credit: PA

Every state differs on hunting regulations and how they handle management of chronic wasting disease, but in recent weeks, wildlife officials in states including Nevada, Iowa, Wyoming, Pennsylvania and Tennessee have either warned hunters about the disease to prevent its spread to their state or confirmed new cases.

According to the Centers for Disease Control and Prevention, at least 277 counties in 24 states have reported chronic wasting disease in free-ranging deer, elk or other cervids as of August.

There are no vaccines or treatments available for the disease, which is always fatal. And while no cases have been reported in humans to date, some researchers worry it poses a risk to humans.

Here’s what you need to know about chronic wasting disease and how to prevent it:

What exactly is chronic wasting disease?

The disease affects deer’s brains and spinal cords through abnormal prion proteins that damage normal prion proteins, the CDC said. The cells collect and eventually burst, leaving behind microscopic empty spaces in the brain matter that give it a “spongy” look, according to the North Carolina Wildlife Commission.

Symptoms, which can take more than a year to develop, include drastic weight loss, lack of coordination, listlessness, drooling, excessive thirst or urination, drooping ears, lack of fear of people and aggression.

How does chronic wasting disease spread?

The disease was first identified in captive deer in the late 1960s in Colorado and in wild deer in 1981, the CDC said. According to the health agency, CWD could be more widespread than 24 states.

“Once CWD is established in an area, the risk can remain for a long time in the environment. The affected areas are likely to continue to expand,” the CDC says on its website.

Is infected meat safe to eat?

Some infectious disease experts worry that if CWD were to infect humans, consuming infected meat would be the pathway.

“It is probable that human cases of chronic wasting disease associated with consumption with contaminated meat will be documented in the years ahead,” Michael Osterholm, director of the Center for Infectious Disease Research and Policy at the University of Minnesota, told state lawmakers earlier this year.

The CDC also says eating infected deer meat would be the most likely way for it to spread to people.

About 7,000 to 15,000 animals infected with CWD are eaten each year, and that number could rise by 20% annually, according to the Alliance for Public Wildlife, which Osterholm cited in his testimony.

Scientists can’t say for sure that CWD will cross over and infect humans, but as time goes on and more infected meat is consumed, the likelihood increases, Osterholm said.

“It’s like a throw at the genetic roulette table,” he said.

People shouldn’t handle or eat meat from dead animals. Also, never shoot and handle a deer or elk that is acting strangely. If you see an animal that appears to be sick, take note of its location and contact wildlife officials.

Some states recommend hunters have deer or elk tested before eating their meat. But even a test can detect CWD only at a certain stage. There is not a test that can definitively say the animal is negative for the disease, Texas Parks and Wildlife notes. Information about what your state recommends is available from state wildlife agencies.

Wear gloves when field-dressing a deer

The CDC recommends wearing latex or rubber gloves when handing a hunted animal and its meat. Also, minimize the time spent touching organs such as the brain and spinal cord tissues. Never use household knives or utensils for field dressing. Always wash hands and disinfect hunting instruments after use.

Hunters who typically have deer or elk commercially processed might want to ask whether their animals can be processed individually to avoid any chance of contamination.

“If you put this into a meat processing plant … this is kind of a worst-case nightmare,” Osterholm told lawmakers.

A “zombie” disease which makes deer become emaciated and more aggressive may sound like the opening to a horror film.

But experts have warned the deadly disease has already affected 24 US states – and could spread to humans next.

Nevada has now become the latest US state attempting to block the highly contagious disease from taking hold with experts warning the outbreak could destroy deer and elk populations.

The illness has been compared to mad cow disease because it is also spread by pathogenic proteins called prions and cause a range of symptoms that resemble dementia and ultimately death.

Prion diseases belong to a family of rare brain diseases that affect both humans and animals, including mad cow disease in cattle and variant Creutzfeldt-Jakob disease in humans.

The US Centers for Disease Control and Prevention has raised concerns that CWD may also pose a risk to humans.

So too has Doctor Michael Osterholm – the American expert who warned the British government of the risks of mad cow spreading to people in the late 1990s.

Dr Osterholm, who is director of the Center for Infectious Disease Research and Policy at the University of Minnesota, told lawmakers that laboratory research suggested it was “probable” that human cases of CWD would occur in future.

Discussing his experience of mad cow disease being transmitted to humans, he said it was likely CWD would also occur through eating contaminated meat. “It is possible that the number of human cases will be substantial and will not be isolated events,” he told a hearing with lawmakers.

He added: “If Stephen King could write an infectious disease novel, he would write about prions like this”.

CWD can incubate for more than a year before animals display the symptoms, so US officials recommend that deer hunters test meat before consuming it.

Wildlife experts have warned that while still rare, the disease is virtually impossible to contain because the disease is neither viral nor bacterial and can remain in the environment for several years.

Peregrine Wolff, a Nevada Department of Wildlife veterinarian, said the state’s officials have taken to testing corpses and monitoring migratory elk and deer at the state line with neighbouring Utah for signs of the sickness.

Nevada also introduced a ban earlier this year on bringing certain animal body parts into the state, including the brain and the spinal cord that can contain large concentrations of prions.

But Ms Wolff said despite those efforts, the disease is unlikely to stop at the Nevada state line.

The documentary “Dominion” (2018)  is a sequel to “Lucent,” released in 2014, which features the dark side of the Australian pig breeding industry in feature film length.
“Dominion” goes further and gives a comprehensive insight into the different livestock industries in Australia.

Worldwide attention caught on Australia’s Animal Welfare business model in 2018 after shocking pictures were released showing sheep being crammed together on a ship from Australia to Qatar, Kuwait and the United Arab Emirates, dying painfully. Then there were protests against the unspeakable animal transports worldwide.

How to finance a documentary that reveals the reality of the meat industry?

The film aims to present facts about the way animals are used. “Dominion” was written and directed by Chris Delforce and co-produced by Shaun Monson, director of “Earthlings” in 2005. The documentary is told by vegan celebrities such as Joaquin Phoenix, Rooney Mara, Sia, Sadie Sink and Kat Von D.

This film was financed by donations. And there is one man who has a big stake in making such films financially possible.

He was a successful investment banker and even became the vice president of Citibank and general director of Citicorp at the age of 34. Oh, a banker? Yes, and what for one. He was even named one of the Top 40 Most Influential Leaders by Australian Business Magazine.

Then came the turning point in his life that was to change everything.
His rethinking should have taken place after visiting a slaughterhouse of one of his customers. He then researched and knew that there would be no going back to his ordinary life as he had led it.

He sponsors the anti-whaling ship Sea Shepherd and the South Australian Children’s Ballet Company and has built schools, orphanages, lion parks and much more.
His Winsome Constance Kindness Trust supports more than 400 projects in 40 countries.
Wollen says his goal is to die broke and to give away all he has with “warm hands” and that he is on the right track. Incidentally, he also financed the “Earthlings” trilogy and thus made it possible.

The wish of Philip Wollens came true because the film has sparked national protests against Australian livestock.

Meanwhile, “DOMINION” is even free, which means that everyone has the opportunity to look at this documentation. Website: dominionmovement.com

And I mean…Not everyone who earns, or has earned a lot of money is automatically a capitalist asshole.
We need money for our fight, and above all to keep up  the competition with the conventional media.

If the money comes from people who also ideologically support our fight and stay behind the idea of animal liberation, the better.