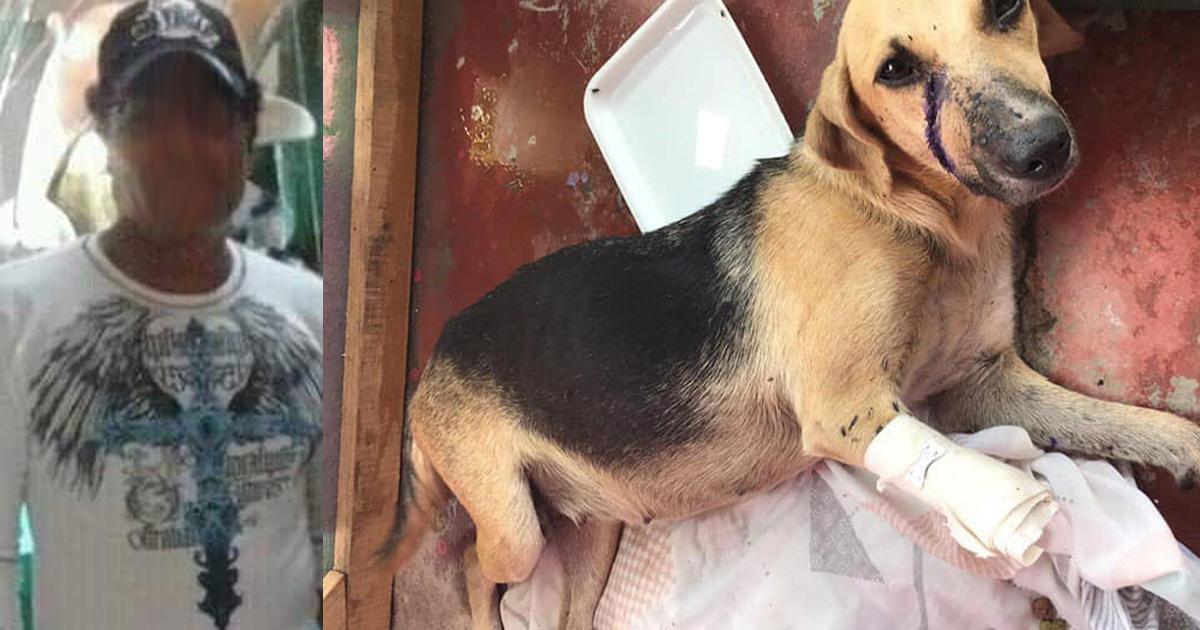 In Veracruz, they identify the monster that macheted the pregnant dog and put a little leg and machete in the face. This is the image of this ABUSER.

In Veracruz, they identify the monster that macheted the pregnant dog and cut her one of her legs and cut her face. This is the image of this ABUSER. It is for others to ask for justice when in this country they do not know that term. Mexico is a country of many savages, starting with the authorities that do not fight against animal murderers and we feel helpless and cannot do anything.

Their Voices Are Being Heard!

Lady Freethinker’s groundbreaking investigation into a factory dog-meat farm in S. Korea is still making headlines with a new article in the Daily Mail, which reaches millions of people each day:

Ruthless dog dealers tried their best to hide the sickening conditions, keeping the dogs deep in the farmland behind rows of tarps. And when LFT’s investigation team found this farm of horrors, the “dog meat mafia” approached menacingly and chased the camera away. But they could not stop us from exposing the truth to the world.

Trapped in dark, filthy, lonely metal cages, these dogs never even get to feel the sun on their faces before being brutally slaughtered for meat. It’s time to stop the cruelty.

Speak out to help end the suffering. Contact Ambassador of the Republic of Korea Cho Yoon-je at generalusa@mofa.go.kr and respectfully urge him to work toward finally outlawing the killing of dogs and cats for meat in Korea.

Lady Freethinker will continue working to expose and end the dog and cat meat trade in Korea and around the world. But we can’t do it without your support.  Will you please donate to help us keep saving animals’ lives?

Thank you for adding your voice to help stop animal cruelty.

New “committee” video about the larks hunting in France: The hunt for larks and lovebirds is in full swing. Despite declining stocks across Europe, France, Spain and Italy have once again released millions of larks and lovebirds for hunting this month.

That is why today the “Committee against Bird Murder” has submitted a comprehensive environmental complaint to the European Commission. The shooting of these species on the train is not sustainable and accelerates the decline of breeding birds in Germany and elsewhere.

The hunting laws of France, Spain and Italy therefore violate the EU Birds Directive. Our complaint is based on recent studies showing both the massive decline of these species in Germany and the United Kingdom and the official firing of around 900,000 larks and 1.5 million lovebirds per year in the Mediterranean. 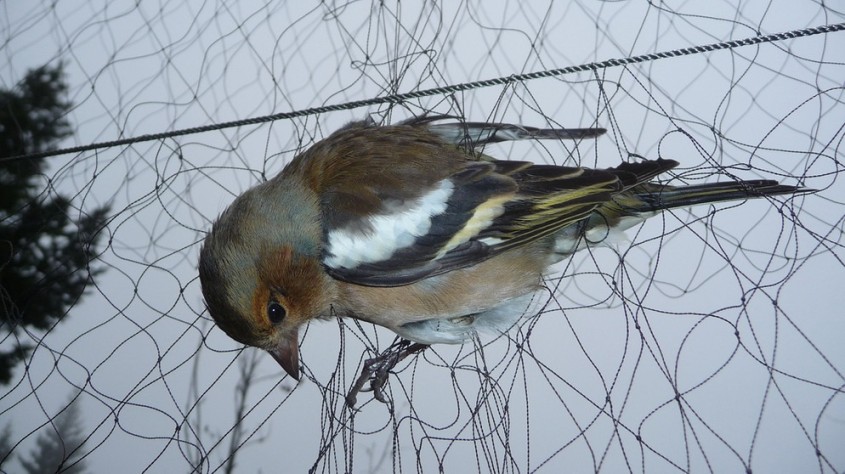 On the French Atlantic coast skylarks may additionally be caught with huge nets. A video released by the committee today shows for the first time how skylarks are captured by French hunters and then killed. The footage is already several years old, but has been withheld by us for legal reasons so far. The documented fishing method is still common practice today.

As bait live decoys serve. The specially caught larks are tethered at their feet and connected with a long cord to the bird catcher, who sits in a hut on the edge of the plant. When birds approach the nets, the bird catcher pulls on the cords and the tailed animals start to flutter excitedly. The catcher imitates the air call of the larks with a whistle and can thus lure a whole swarm into ruin.

When enough birds have gathered, the bird catcher triggers a mechanism and the several hundred square meters of nets collapse over them. It is allowed in two departments each bird catcher to set up to 300 catching cages for larks.

Officially, more than 3,000 birdcatchers are allowed to catch larks, the rate differs depending on the department and is in the Gironde, for example, at 336 larks per catcher per year. A total of 1 million skylarks may be caught, but in truth there are probably a few hundred more!

My comment: Crimes against animals have become more professional.
Mafia methods everywhere.
It continues to be hunted, murdered, tortured.

All these crimes are partially ignored, tacitly condoned or made possible on corrupt hunting lobbyists in politics.

In addition, they are made possible by a perpetrator friendly judiciary and an indifferent society, which does not want to openly condemn these crimes, and sells its cowardice as “tolerance”.

Throughout the sporting world, vegan athletes are no longer an anomaly. Check out this profile of eleven prominent pros from eight different sports who follow a vegan diet.

For many decades, the National Football League posed a seemingly insurmountable barrier to vegans, and many athletes assumed vegan diet couldn’t attain the muscle mass and the strength required for NFL competition. But during the 2018 season, more than a dozen members of the NFL’s Tennessee Titans embraced a vegan diet. Standout wide receiver Griff Whalen includes the words “100% #vegan athlete” in his Twitter bio. And Colin Kaepernick tweeted the hashtag #NotBadForAVegan to accompany a training photograph.

Scott Jurek, a vegan since 1999, set a world running record by covering 165.7 miles in a 24-hour period—a distance of more than six marathons!

When it comes to sports nutrition, the primary special need for athletes is to simply eat plenty of nutrient-rich foods. Additionally, weight lifters and other athletes doing heavy strength training must also boost their protein intake somewhat.

Everyone from a professional athlete to a weekend golfer stands to benefit from a well-planned vegan or vegan-leaning diet. And it’s reassuring that vegan diets can deliver the goods to anyone who wants to enhance their athletic performance. If you want to adopt a well-planned vegan diet, check out our How to Go Vegan article, as well as our Vegan Nutrition Guide.

You don’t need to become an elite vegan athlete to experience the benefits of exercise and basic fitness. Our comprehensive Vegan Fitness Guide will show you a number of easy and rewarding ways to become more physically active.

The first book every serious vegan athlete should read is Plant-Based Sports Nutrition, by D. Enette Larson-Meyer and Matt Ruscigno. The book offers comprehensive nutrition advice to optimize athletic performance, yet it refrains from bogging the reader down with complicated minutiae. You’ll get all the information you need—recipes, training advice, and meal plans—to help you meet your body’s needs during training and competition.

Regardless of whether you seek to increase strength, bulk, or endurance, there’s a vegan-oriented book that will provide you with solid advice for achieving your goals. Here are some of the best recent titles:

Not so long ago, veganism was widely regarded as incompatible with the training requirements for a number of sports. That is happily no longer the case, and some of the world’s most accomplished athletes are proving on a daily basis that a well-planned vegan diet can indeed fuel top-level athletic performance.

We cannot guarantee this link will work – please try 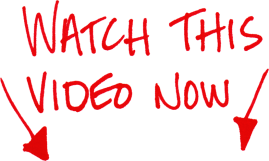 Four men convicted of badger baiting following an undercover investigation by BBC Wales have been jailed.

They denied attempting to kill or take badgers in Pembrokeshire in March 2018.

But their actions were uncovered by the BBC Wales Investigates programme.

The four defendants were handed the following sentences on Thursday:

When Jones was taken away, someone in the public gallery shouted “keep your head up love”, he was previously jailed in June for 18 weeks after admitting unnecessary cruelty to animals, relating to two dogs who were injured.

The latest prosecution followed investigations by the RSPCA after the programme was shown.

The trial was told it was accepted the four defendants had not caught a badger at Llanddewi Velfrey on 24 March.

But prosecutor Jon Tarrant said: “There is ample evidence here that they were attempting to take a badger.”

The prosecution said the defendants were “on the chase” when a badger was spotted in woodland near Narbeth.

The court heard the group pursued it, dug a large hole to try and catch it, but ultimately failed to corner the animal.

District Judge Neil Thomas said it had been a “strong prosecution case”.

He said a BBC researcher who gave evidence against the four men was “a clear, confident and compelling witness”.

The judge said he did not believe the only defendant to give evidence, Jamie Rush.

He said: “I have no difficulty coming to the unreserved conclusion, that he was not telling the truth.”