An escaped cow has caused a stir on Saturday, April 13, in the district of Altötting, a city 90 kilometers from Munich. Firefighters, police and farmers have tried to capture the animal. Without success. Stun darts have shown no effect. “The distance was too big, the cow has always moved away”, explains the police in Altötting opposite the  “Passauer New Press”.

The cow on the way to freedom

In the end, the cow was shot by a hunter in a field. The measure had previously been discussed with the owners (!!!) it is said by the police Altötting against the “Passauer Neue Presse”.

Meanwhile, it is officially confirmed that the cattle were shot. “The cow would have become a danger to road traffic,” said a spokesman for the responsible police inspection in Altötting. The animal was already bristled at 7 o’clock in the morning, whereupon firefighters, policemen and farmers searched for the animal.

The cow, still in freedom

When the animal could be surrounded in the area of the state road 2107, a forest ranger tried several times to anesthetize this with an anesthetic rifle. However, the forester did not succeed in getting close enough to the cow. That’s why the animal was finally shot.

“The cow would have become a danger to road traffic,” said a spokesman for the responsible police inspection in Altötting. 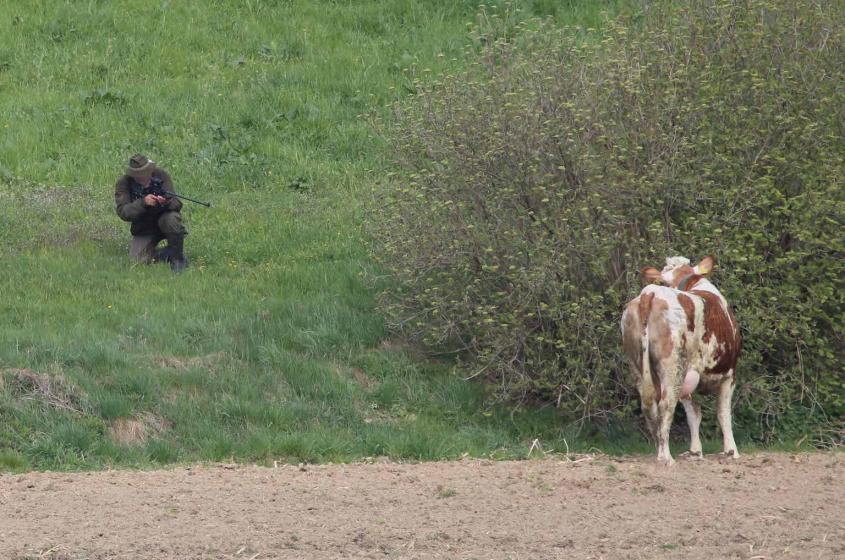 Originally outgrown the cow was apparently in Gasteig in the district of Altötting. Then she ran towards Altötting and was there initially surrounded by the forces in the area of the state highway.

According to local information, a hunter was used to disable the animal with an air rifle. The hunter, who had the necessary permission to shoot the cow with the stun gun, could not bring it down. Therefore, the animal is said to have been killed with sharp shots, according to information from site. Closer backgrounds are currently unknown.

My comment: This is not the first time that a slave has had a happy opportunity to escape his terrible fate in the tyrant hands of our conspecifics.
How cowardly is that! They take the right to go armed against a peaceful animal that is unarmed and has never done anything to anyone!

And for experienced murderers, it is natural to justify their systematic violence against animals with really ridiculous rules of order, which in reality have the function of veiling the injustice and making it invisible.

It makes us very sad, because it was pain and despair, fainting and death the price of freedom for our friend, because the ruling species wants to remain always the culprit.