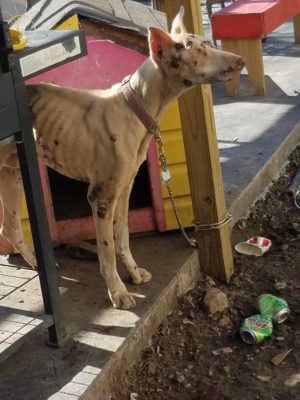 Goal: Punish the man who allegedly starved a dog nearly to death

A dog became seriously ill after he was seemingly starved and denied vital veterinary care. He appeared so emaciated that his bones showed through his skin. Demand justice for this innocent animal.

This case is horrifying. An Oregon man brutally raped his fiancée’s dog in a drunken rage after she wouldn’t respond to his text messages. The small Lhasa Apso, named Estrella, had to be euthanized.

Estrella lost her life — but her attacker only served 60 days in jail, because that is the maximum allowed under current law. He is already out of jail, posing a dire threat to animals and humans.

We must speak out for stronger animal protections in Oregon, to stop people who torture animals from being let right back out onto the streets.