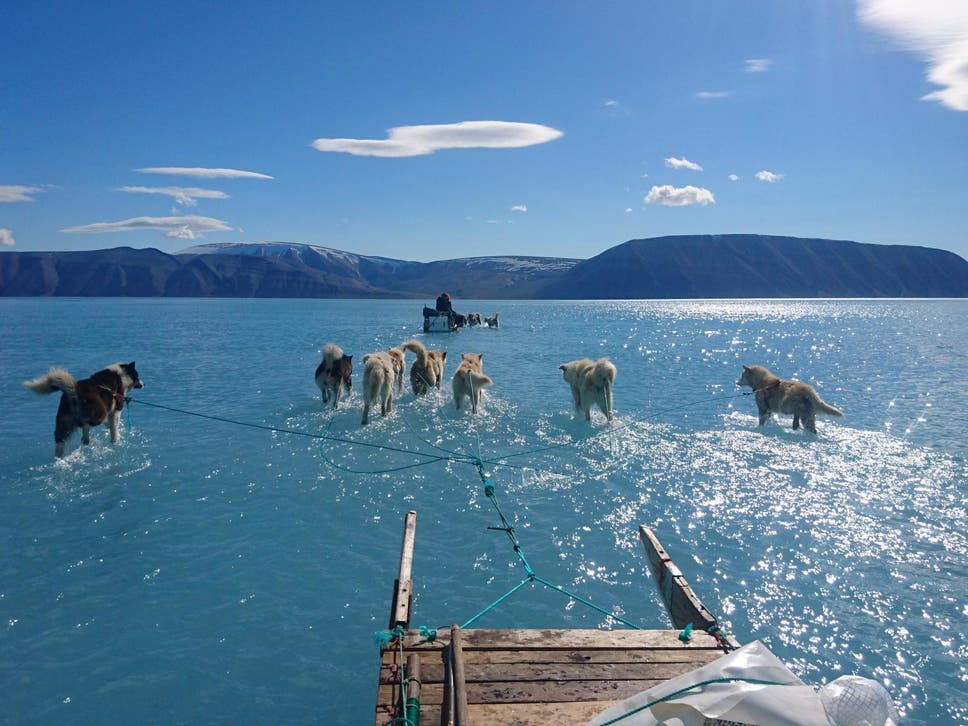 An extraordinary photograph of huskies pulling sleds through ankle-deep meltwaters on top of an ice sheet in Greenland has brought attention to the uncharacteristically warm temperatures affecting the Arctic.

Danish climatologist Steffen M Olsen took the picture on 13 June while on a routine mission through the Inglefield Gulf in northwest Greenland.

The rapidly melting ice caused difficult and dangerous conditions for the team of climatologists who were retrieving weather station equipment from the area.

The thin layer of water was standing on top of an ice sheet around 1.2 metres deep, Dr Olsen said on Twitter.

“We know the ice is around 1.2m thick and that we have about 870m [of] water below us. Together with the local hunters we have been measuring also ice thickness from December to now. An ongoing activity for almost a decade now.”

Dr Olsen’s colleague Ruth Mottram, an expert on Greenland’s ice sheet, told The Independent the onset of unusually warm temperatures combined with very few cracks in the ice meant the rapid accumulation of meltwater was unable to drain through the solid sheet of ice.

She said along with local hunters who still live a traditional subsistence lifestyle in this region, climatologists from the Danmarks Meteorologiske Institut (DMI) had worked for several years to monitor ice and ocean conditions in Inglefield Bredning – a fjord in north western Greenland near the settlement of Qaanaaq.

She said: “In the project they place instruments on the sea ice that forms in the bay in winter each year and then retrieve them around about now in late spring/early summer before the sea ice breaks up, in order not to lose what are pretty expensive instruments into the ocean!

“This year the expedition to retrieve the instruments (by dog-sled, still the most practical way to get around in this region at this time of year) ran into a lot of standing water on the sea ice. The ice here forms pretty reliably every winter and is very thick which means that there are relatively few fractures for meltwater to drain through.

“Last week saw the onset of very warm conditions in Greenland and in fact much of the rest of the Arctic, driven by warmer air moving up from the south.”

She added: “The DMI weather station nearby at Qaanaaq airport registered a high of 17.3C on Wednesday and 15C on Thursday, which is pretty warm for Northern Greenland, even in summer!”

On Monday evening Dr Olsen wrote on Twitter the expedition to retrieve the instruments had been successful. “We managed to recover the remaining instruments so now to the data recovery and hopefully heading home in a couple of days,” he said.

Greenland is currently in the grip of near-record levels of ice melt, with the day Mr Olsen took the photograph – 13 June – seeing the country lose more than 2 gigatons (equal to 2 billion tons) of ice on that day alone.

The sudden spike in melting “is unusual, but not unprecedented”, Thomas Mote, a research scientist at the University of Georgia who studies Greenland’s climate, told CNN.