The mass grave “Al Shuwaikh” had only negative feelings and thoughts generated lately.
But let’s not forget that there were also a few, who actively tried to prevent it, and one of them was the Dutch MEP Anja Hazenkamp.

Hazekamp visited the Port of Midia, where she observed horrendous animal abuse during loading.

“Sheep were kicked, beaten and attacked with electric poles, but Romanian authorities refused to intervene. Europe can no longer look the other way. Animal welfare rules are being violated systematically. The Commission must act now.

😭🐑🚢 Update from the Romanian harbor of Midia. Trucks arrived. We’re not allowed to come near the #Alashuwaikh vessel. But we can hear the animals loud and clearly. #StopLiveTransport pic.twitter.com/T8FGNcjxeD

Before the world’s largest ship transport by ship took off, MEP Anja Hazekamp from the Dutch party “For the Animals” traveled to Midia to protest the departure.

On 10 July, but only from his office, EU Health Commissioner Vytenis Andriukaitis had written to the Romanian Minister of Agriculture, Petre Daea, to ban such and especially this unnecessary long-distance transport. Alone these temperatures did not allow the transport, it says in the letter.
The Romanian Minister of Agriculture, Daea, rejected the request as unfounded and sent 70,000 others to the death.
Andiukaitis now announces that there are no grounds for infringement proceedings against Romania.

On the day the Al Shuwaikh took off, Andriukaitis discussed long-distance animal transports at high temperatures with European agriculture ministers.

Hazekamp presented the subject to Agriculture Commissioner Phil Hogan, who then promised to discuss this with Andriukaitis, stating that he was unaware of this transport.

Discussions have not saved a single animal until today.
Only acts!

In the end, no one knew anything, no one could do anything, after all, SHE was the only one who drove to Midia, and showed solidarity with the 70,000 animals!

Anja Hazekamp has done what she is paid for, namely protecting animals and actively trying to stop the transport!

Thanks Anja Hazenkamp in the name of the animals!!

For this crime, are responsible the hypocritical EU Commissioners, whose work ethic on paper ends.

So we ask ourselves: why can not such EU Commissioners be replaced?
We don`t know how they could get such a responsible post, they got it without our voice, what we know is that they don`t care for the welfare of the animals, but they benefit from the suffering of the animals.

We did not forget the mass grave “Al Shuwaikh”!
And we will do our utmost to ensure that those responsible for this mass grave receive a just punishment.

A nice video from the active fight of the Dutchwoman, as MEP, against animal transports 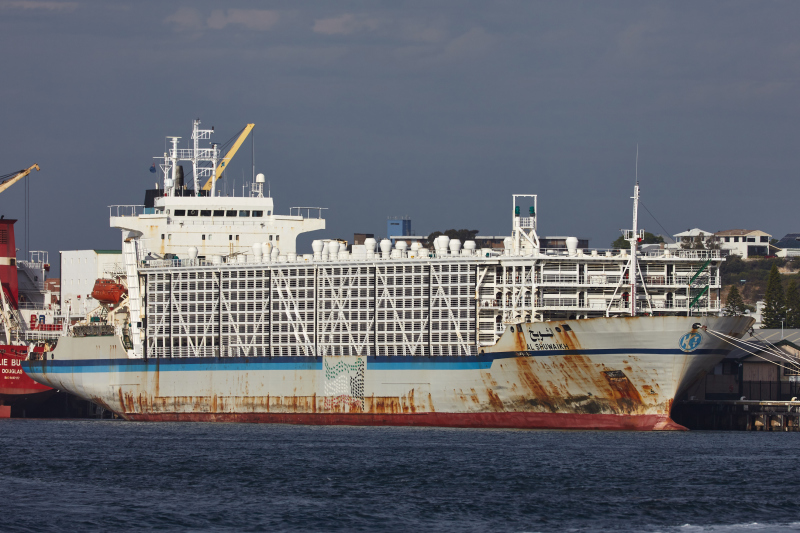 We have now logged the entire journey of the ‘Al Shuwaikh’ with its ‘cargo’ of 70,000 live Romanian sheep all the way from Midia on 15/7/19 through to the final arrival in Qatar on 3/8/19. This includes the stops at Jeddah and Jebel Ali in Dubai to offload animals.

All this data is now stored in our archive ready for when the EU MEP’s, Commissioners etc return from their Summer breaks; when we will launch an all out campaign, along with other international groups we have contacted; over the barbarity of this consignment.

We will be urging the EU to prosecute the Romanian authorities in the harshest way; just as one example, because of the temperatures in which the sheep were transported. Virtually throughout the entire journey the sheep were travelling in excess of the maximum temperatures allowed by EU Regulation 1/2005; which being an EU member state; Romania should be complying with.

Now we have all the data it is simply a waiting game for the EU to return to Brussels; then we will start.

Here we see 2 harpoons being fired into a whale because the first was non lethal.

A grenade tipped harpoon. This animal is suffering immensely.

This is #Japan whaling #OpWhales

here we see 2 harpoons being fired into a whale because the first was non lethal. A grenade tipped harpoon. This animal is suffering immensely. This is #Japan whaling #OpWhales pic.twitter.com/WbnYS0FqW0

See the reaction of this donkey to see the girl who raised him since he was little;

See the reaction of this donkey to see the girl who raised him since he was little 😭😍 pic.twitter.com/ebIEx5Mm6G