“We have got Better conditions than most nursing homes”

Be a part of the story:

We’ve got 25 DAYS to raise enough money to fund our documentary – the UK’s biggest ever exposure of factory farming. This will be definitive – the truth about Hogwood, and factory farming, once and for all.

The documentary follows the Viva! Campaigns team as they enter Hogwood Farm for the very first time and shows what they found.

We’re fast approaching an historic moment in the fight against cages – and you could help make history for farm animals all over Europe right now.

The deadline for the End the Cage Age European Citizens Initiative (ECI) is Wednesday 11 September. This petition, which calls on the European Commission to ban all cages for farm animals, has united an entire Continent against cages.

With the Brexit deadline still uncertain, it’s now possible that signatures from UK citizens may count towards our ECI. And, one thing’s for sure: we must do everything we can to free 300 million farm animals in Europe from cage cruelty.

If you haven’t already done so, please sign the ECI.

In the fight to End the Cage Age, it’s crucial that the voices of UK citizens are heard. That’s why, over the past 12 months, we’ve run two UK-focused petitions: one targeting Britain’s agricultural ministers, the other calling for a ban on cages to be debated in Parliament.

With the support of amazing people like you, we’ve mobilised well over 250,000 people across both petitions and secured the parliamentary debate.

Now, we have a chance to make the voices of British citizens heard by Europe’s decision makers too – an opportunity that we cannot afford to miss. We owe it to the millions of animals – pigs, calves, hens, rabbits, ducks, quail, geese – confined in cages, sometimes for their entire lives.

The ECI must have at least one million verified signatures in order to succeed. All of the signatures collected so far are yet to be validated – that’s why it’s crucial we gain every last signature we possibly can, right up to the finish line.

Together, we can End the Cage Age.

Please, sign the ECI now and call on the European Commission to ban cages for all EU farm animals.

Thank you for taking the time to help give all farm animals a life worth living.

To all who love and read this blog,

I’m 10 days away, everyone needs a little vacation, right?
I will think of you and miss you too.
But on the 7th of September I am back and active again.

With love to all, Venus

With a clear decision, the Slovenian Constitutional Court ended a lengthy discussion on the slaughter of animals without anesthesia, meaning the flesh “halal”, as demanded by Islam. This remains banned in Slovenia, the judges unanimously confirmed. The Muslim community has requested the review of this law.
The ban on anesthetic slaughter also comes into force in Wallonia.

No violation of religious freedom

The country’s supreme court argued that the constitution did not allow animals to be easily avoided for unjustifiable causes and that the law did not disproportionately affect the right to religious freedom.
The Muslim community sees this differently, arguing that the method of ritual slaughter prescribed by Islamic law, which does not provide for stunning, is an integral part of the Muslim religion – and thus also of its religious freedom.

Shedding is considered an animal torture

However, the Constitutional Court insists that the protection of animals against torture contributes to the observance of important moral principles.
A state can prohibit acts that run counter to the basic rules and moral framework of a society without unduly interfering with the right to religious freedom, said the judges, who unanimously passed their decision.

The animal protection law prohibits not only the ritual slaughter in Islam, but any kind of slaughter without anesthesia. Although this hampers access to Halal meat, it does not prevent it because Halal-standard slaughter is possible abroad, the judges argued.

My comment: Josef Schuster, President of the Central Council of Jews in Germany (ZJD) has a different opinion: “The ban on the slaughter without stunning, which is now also in force in Wallonia, is another sign that religious freedom is under attack across Europe.” !!

His hope “… that the European Court will lift the ban …” will hardly be fulfilled. A ban on slaughter without stunning does not violate religious freedom, ritual slaughter is not a service of God. It is a barbaric animal cruelty!

At the same time we condemn without prejudice the annually thousands of “false stunning” in German slaughterhouses. Despite decades of protests from animal rights activists and responsible citizens, these crimes continue to be practiced, even though they are unlawful under the law.

It is disappointing and shameful for President of ZJD not to understand that animals are sentient beings, our fellow creatures with the same feelings, sensitivities, sensations, needs and social structures with which cold-blooded people commit the worst crimes as if they were not animals, but machines or objects. What is this life-despising religion that allows an archaic, gruesome, anesthetic-free slaughter of animals?

“For the animals every day is Treblinka,” said the countryman of Mr. Suster, Isaac Bashevis Singer, and not only in relation to the shafts.
The President of the Central Council of Jews should urgently recall these words of a Jew.

Well it seems that a lot of our time now will be involved with the Amazon destruction in Brazil; and also a live animal export situation involving Brazilian cattle being exported all the way to Derince in Turkey for slaughter. 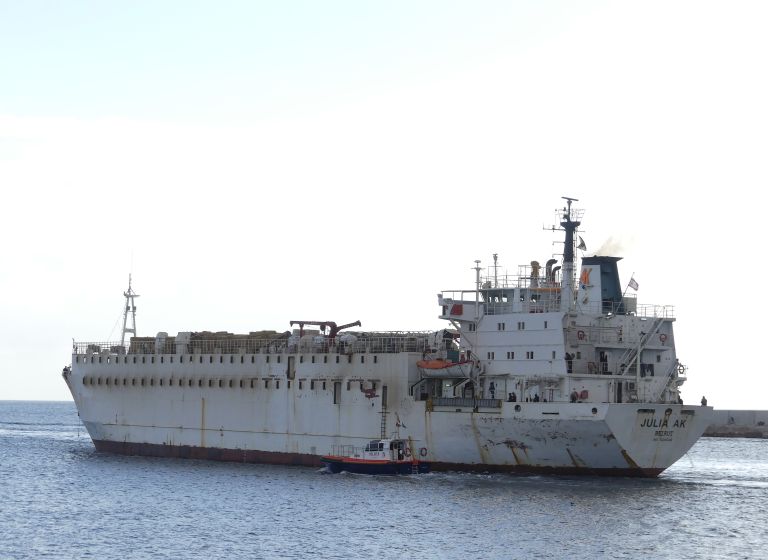 The ship livestock carrier, the ‘Julia AK’; has travelled all the way from Rio Grande in Brazil to the Mediterranean Sea, where it was supposed to have docked to take on fresh food and water. Reports have it that 5,500 young cattle are on board.
The vessel was to have stopped in Categena, Spain, but has been denied the right to dock by the Spanish authorities.
https://news.sky.com/story/thousands-of-cows-could-starve-to-death-on-stranded-livestock-carrier-11795308
Majbd Bid, operations manager at the Lebanese company which owns the vessel, told Sky News it was not allowed to dock because of a legal dispute with a Spanish fuel company.

The company which is doing the shipping is:
https://www.livestock1.com/livestock-supply-companies/talia-shipping-line

The company, Talia shipping line; says it has a turnover of between 10 and 100 million dollars.

We have spoken with them today (28/8) and they have now informed us that in conjunction with the British animal welfare organisation in Spain, who are acting as the coordinator, the ship has now moved on and has been allowed to dock in another part of Spain.  This has currently not been confirmed to us by any other source – we will get more.

In our discussion with the shipping company from Lebanon; we got confirmation that the cattle on the ship were going to Turkey for (ritual) slaughter. We told them that authorities in Brazil are the lowest of the low as far as we are concerned, and asked why cattle have to be taken by sea all the way from Brazil to Turkey, only to be slaughtered. They did not provide an answer, or talk to us about all the emission and fuel wastage being undertaken by this vessel on its journey.

“Everything we see down there is dead”

If you have not seen it with your own eyes, it’s hard to imagine what the fires are doing in the Brazilian rainforest. “This is not just a forest fire, it’s a cemetery, everything we see down there is dead,” says Greenpeace activist Rosana Villar. She flew over the affected area to get an impression and she is appalled. In the video we show how the local people suffer from the fires.

The G7 wanted to support the Brazilian government with money for firefighting.

But the president, Jair Bolsonaro, does not want to accept the help. Instead, he demands that the French president apologize to him. He now had to take criticism from his governors. The regional leaders of the Amazon region fear a huge image damage, if Bolsonaro continues to do so.

“If Brazil isolates itself at the international level, it will face serious trade sanctions against our producers,” said Flavio Dino, the head of state of Maranhão. “I think we should now take care of our problems,” says Hélder Barbalho, governor of Pará.

Defense Minister: “It is not out of control”

The number of fires has now increased to 82,000, as the Brazilian space agency INPE announced. Many fires were apparently laid by farmers, who want to create more space for fields around pastures.

But because it is just as dry in the region, the flames repeatedly attack forest areas and cause great destruction.

The government has now sent the military to the Amazon region to fight the fires. About 2,500 soldiers, 15 aircraft and helicopters and ten ships are in operation, said the Ministry of Defense. Some fires had already been pushed back. Is the situation serious? ” Yes, but it has not got out of hand, “said Defense Secretary Fernando Azevedo. Hopefully he will be right, because the dry season has just begun.

If you look at space from space, it seems that also parts of Africa are completely burning: every red dot represents a fire within the last seven days – the earth’s surface in parts of central and eastern Africa is barely recognizable.

In addition to Brazil and Africa, Indonesia is also suffering from devastating forest fires: According to the Indonesian Ministry of the Environment, 42,740 hectares of rainforest were affected by fires nationwide in the first five months of this year – even before the dry season had even begun. That is almost twice the area of the previous year. With a total of 95 million hectares of tropical forest, Indonesia is one of the most important countries for rainforest protection.

My comment: Nobody really seems to know what kind of biblical catastrophe threatens our planet. That’s why nobody seems to care.
In contrast, every minute was recorded during the fire of Notre Dame and within days were collected over 900 million euros in donations.

Will a restored cathedral help us if we have no more air to breathe?