May 2019 -pigs endure a pitiful ‘life’ in a Chinese intensive system.

Scientists are working to develop a vaccine to help guard the world’s pork supply as a deadly virus ravages Asia’s pig herds.

Farmers have long contained its spread by quarantining and killing infected animals, but the disease’s devastating march into East Asia is intensifying the search for another solution.

The virus hadn’t been considered as high a priority for researchers until it turned up last year in China, home to half the world’s pig population, likely by way of Eastern Europe and Russia. Since then, it has spread to other Asian countries including Vietnam, killing millions of pigs along the way. Though it does not sicken people, the disease is highly contagious and deadly to pigs.

“Today’s situation, where you have this global threat, puts a lot more emphasis on this research,” said Dr. Luis Rodriguez, who leads the U.S. government lab on foreign animal diseases at Plum Island, New York.

One way to develop a vaccine is to kill a virus before injecting it into an animal. The disabled virus doesn’t make the animal sick, but it prompts the immune system to identify the virus and produce antibodies against it. This approach, however, isn’t consistently effective with all viruses, including the one that causes African swine fever.

It’s why scientists have been working on another type of vaccine, made from a weakened virus rather than a dead one. With African swine fever, the puzzle has been figuring out exactly how to tweak the virus.

In Vietnam, where the virus has killed 4 million pigs in six months, the government said this summer it was testing vaccines but provided few details of its program. In China, the government indicated scientists are working on a vaccine that genetically alters the virus, an approach U.S. scientists have been pursuing as well.

Taiwan last week imposed new security screenings for arriving air passengers carrying pork products in efforts to stave off an outbreak, according to the Taiwan News newspaper. Infected pig carcasses have been found washed ashore on Taiwan’s beaches, but there has been no outbreak on the island.

Myanmar reported its first outbreak in early August and North Korea reported an outbreak in May, according to the United Nations Food and Agriculture Organization.

The U.S. Department of Agriculture said it recently signed a confidential agreement with a vaccine manufacturer to further research and develop one of Plum Island’s three vaccine candidates. The candidates were made by genetically modifying the virus to delete certain genes.

But before a vaccine becomes available, it needs to be tested in large numbers of pigs in secure facilities with isolation pens, waste and carcass incinerators and decontamination showers for staff, said Linda Dixon, a biologist at London’s Pirbright Institute, which studies viral diseases in livestock. The process takes two to five years, she said.

The extensive testing is necessary to ensure vaccines made by weakened viruses don’t have unintended side effects.

In the 1960s, for instance, Spain and Portugal tested such a vaccine after outbreaks of African swine fever. The treated pigs seemed fine at first, but then lesions broke out on their skin, arthritis locked up their joints and the animals failed to fatten up, said Jose Manuel Sanchez-Vizcaino Rodriguez, who leads a lab focused on African swine fever at the University in Madrid.

Even if vaccines become available, they might not work across the globe. Vaccines developed for the virus in China and Europe, for example, might do nothing in sub-Saharan Africa, where the disease has been around longer.

A vaccine might be most desirable in places where the disease is widespread, said Daniel Rock, who previously headed Plum Island’s African swine fever program. Other countries might prefer the quarantine-and-kill method.

That could be the case in the U.S., where health officials have been training pork producers how to spot and report potential symptoms, which can include bleeding, lethargy and loss of appetite.

Still, Rock said the disease’s global spread has made the option of a vaccine a high priority in the U.S.

WAV Comment – with intensive systems you eventually reap what you sow.  Intensification obviously contributes a lot to the rapid spread of this disease.  Do we feel sorry for the farmers who are losing animals through running intensive systems ? – NO.  When they analyse after all their animals dying; they may realise that there are better ways to raise animals.

Kittens Thrown From Car to Their Deaths Deserve Justice

Goal: Punish the person who threw kittens out of a moving vehicle, killing both.

Two young kittens were thrown from a moving vehicle in a horrific case of animal cruelty. They each died from their injuries. Demand justice for these innocent animals.

“There was no need to toss them out of the window when you’re that close to the animal shelter. You could have easily just stopped and surrendered them there,” stated Louisa County Animal Control Officer Alyssa Ellison. A witness spotted the driver of a truck painted with gray primer driving on Route 33 near the Louisa Reservoir and throwing the approximately 6-week-old kittens from the window. One died on impact with the road, the other sustained several cuts to the head and died on the way to the animal hospital.

The Louisa County Sheriff’s Office is investigating this case as animal cruelty. They have not yet identified any suspects. Sign below and demand that the person responsible for this horrific act is prosecuted and punished to the fullest extent of the law.

Two kittens perished in a cruel and heartless act of animal cruelty. Thrown from a moving vehicle, one died on impact with the road. The second kitten, thought to be about six weeks old, suffered severe cuts to the head and trauma from the impact that eventually took his or her life. This cruelty happened only four miles from the county’s animal shelter, where the seemingly unwanted kittens could have been taken in and cared for without question. This indicates an act of deliberate cruelty and malice against innocent animals.

The person behind this act of cruelty is still out there and likely a danger to local animals. I demand that you prosecute and punish this person to the fullest extent of the law.

Man gored to death by bull at Spanish festival

A man has been gored to death by a bull during a festival in central Spain, officials said. 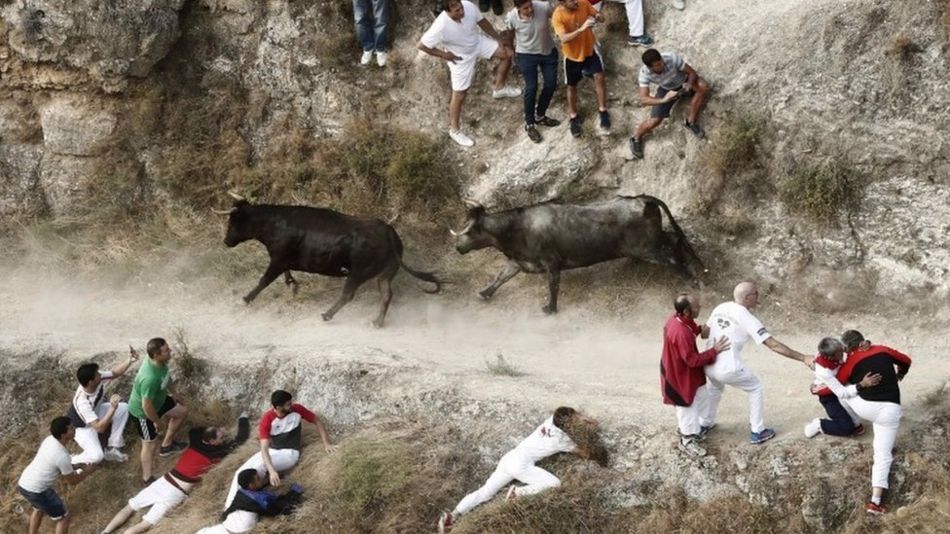 The 62-year-old was killed during a bull run in Cuellar on Thursday.

The man suffered “several deadly horn blows” in the chest and neck and could not be saved, town mayor Carlos Fraile told local media.

The victim was only a spectator at the festival but was rammed into a field and gored. Another spectator climbed onto a wall to avoid being gored.

Spain is famous for its summer bull runs and there are many casualties every year. Eight people were gored and 35 injured at the famed San Fermin festival in Pamplona this year.

WAV Comment – Play with fire and you may get burned !

Hundreds of experts just issued a shocking new report: coral breeding cycles are collapsing, currents are shifting by hundreds of kilometres, and the Reef’s health has been downgraded to “very poor” for the first time ever.

And the Morrison Government’s response? Hide. Deny. Distract. Like when he tried to get Pacific Island leaders to shut up about climate change.  Like when he pressured UNESCO to ignore the impact of climate on the Reef.

Morrison is desperate to bury the story of the climate crisis and keep big coal donors happy.

But the tide is rising. And so must we. The report is so damning, it’s already making headlines across the world.

The scientists said it best: “actions taken now will matter.”

STAND WITH SCIENTISTS: Sign the petition and make their call for action too big to ignore!

This news is so devastating, even Morrison can’t make it go away.

Right now, we’re preparing a simple, plain-English summary of the 374-page report to get in front of every MP and press gallery member. With your help, we can build up pressure on MPs from all sides of politics to demand answers when parliament goes back in a week. First, we need hard proof that voters are demanding action in numbers too great to ignore.

Sign now to demand all MPs join you in speaking out about this devastating news.

The Reef is one of the world’s most adored natural wonders. It is the sea country home for more than 70 Traditional Owner groups. It provides meaningful work for 70,000 people.

As well as a stark warning, the scientists also delivered a message — now is the time to step up, not give up:

“It is important not to lose optimism by thinking the job is too big, or to think that a changed Reef is far in the future — actions taken now will matter.”
Will you join the call for every single MP to step up and tell the people what they are doing to save the Reef from the climate crisis?

In the years we’ve defended the Reef together we’ve stopped dredging, overturned plans to expand Abbot Point Port, forced shipping companies to steer clear of some of the most fragile ecosystems, and blocked the construction of the biggest new coal mine on earth.

Together, we are powerful. Today, the Reef needs us more than ever.