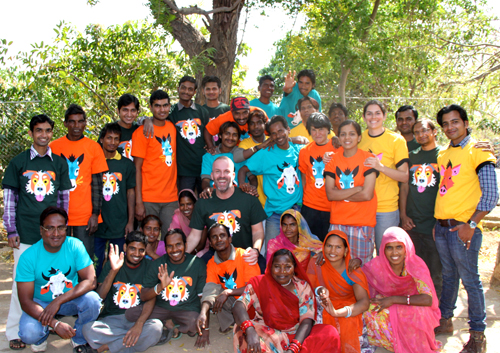 Rain is pouring but spirits are soaring because we need the rain to raise the ground water table in the arid Udaipur region. Donning rain coats and slogging through very muddy ground our amazingly devoted staff and volunteers arrived on Thursday for the double festival of Rakhi and India’s Independence Day. After singing India’s national anthem we moved into the Rakhi mode, celebrating with bracelets tied on each other’s wrists to signify protection of one another.

After terrible abuse, Frankie was abandoned to die. But we saved him!

This is the story of one donkey, but abuse happens to almost all working animals. They are so often hurt, whether as bullocks used in agriculture or elephants used for tourist rides. We hope Frankie’s story can help inspire all of us to speak out against abuse of the vulnerable wherever they are, whoever they may be.

Please donate for the medical care of animals rescued from abuse

A donkey’s legs flail when he’s completely stuck upside down in a ditch…a dog is suffocating with his entire head caught in a plastic jar…an enormous cow is trapped after falling into a well, and more! How to hoist and carry and pull them into safety?

These beautiful rescues will leave you breathless.

The Lemon Tree Team brightened up a very rainy afternoon with smiles and animal love.

Biggest staff group ever to visit–thank you to LEMON TREE HOTEL! 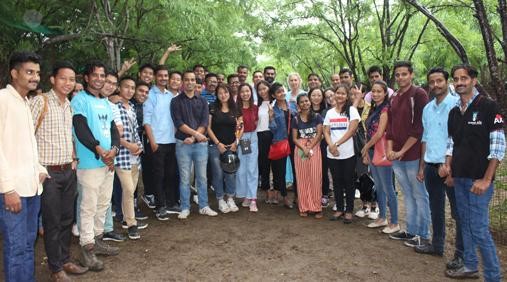 With the largest employee group ever to visit Animal Aid, we were thrilled to welcome the staff of The Lemon Tree, a luxury hotel opening soon in Udaipur, whose general manager Rahul Kargaonkar and Alwin Divarkaran have been long-time animal protectors. They’ve been feeding 11 street dogs in the construction site of the new hotel, and say they will remain welcome residents after the hotel opens. Animal Aid will sterilize all of them within the next few weeks. Thank you so much Lemon Tree People for brightening up our rainy afternoon with your incredible commitment to helping animals 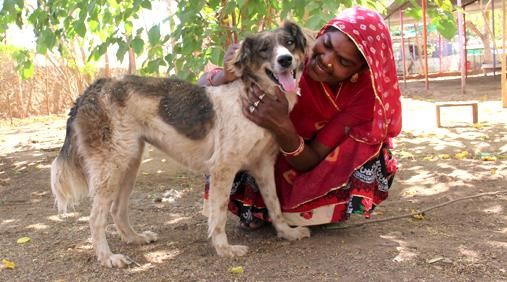 Often moving at lightning speed, here comes Kesar Gameti, who for 5 years has given incredible care to the 30 disabled dogs who live in the shelter area–Tarzan with cerebral palsy, 2.5-legged Hero, arthritic Buddy, behaviorally challenged Annie, (said only with a half smile), “otherly-abled” Horse (one heck of a distemper survivor) and a luscious batch of others, each with his or her own reason for needing to live in Animal Aid.

Kesar is as dear to each as they are to her. She bathes them, feeds, cleans, combs, and encircles each one with the most beautiful loving care. There are many souls in Animal Aid whose happiness is owed to Kesar (and many of them are human, too!)

Call for Action: Shut down the illegal “Meat Dog” auction house in Gimpo!

Shut down this awful dog auction site, where bidders bid for dogs such as jindos (one of the Korea’s national treasures), golden retrievers, labradors etc., while their cage mates watch on in horror as the humans try to out bid each other for their meat. This is an example of how horrific humans can be to our best friends. Let’s take action now to close this auction for good!

Dog butcher in Tongyeong, South Korea is daily bludgeoning dogs to death in front of other terrified dogs and the local government authority is doing nothing about it. This video is not a replay of same clip over and over. Each of these were recorded at different times. This psychopath criminal has 40 to 50 dogs in his farm and the dogs are killed in this horrific way. This is a violation of the Animal Protection Act. We want the city of Tongyeong to punish this criminal and shut down the hellhole dog farm/slaughterhouse immediately. Please sign and share!

From an interesting article of the German newspaper “taz”:

“Since April of this year, the “Climate Cabinet” of the Federal Government has been struggling to find sustainable solutions for transport and agriculture. German society is debating meat abstinence, and consumption of beef and pork is slowly declining. Only the chicken has none of it. 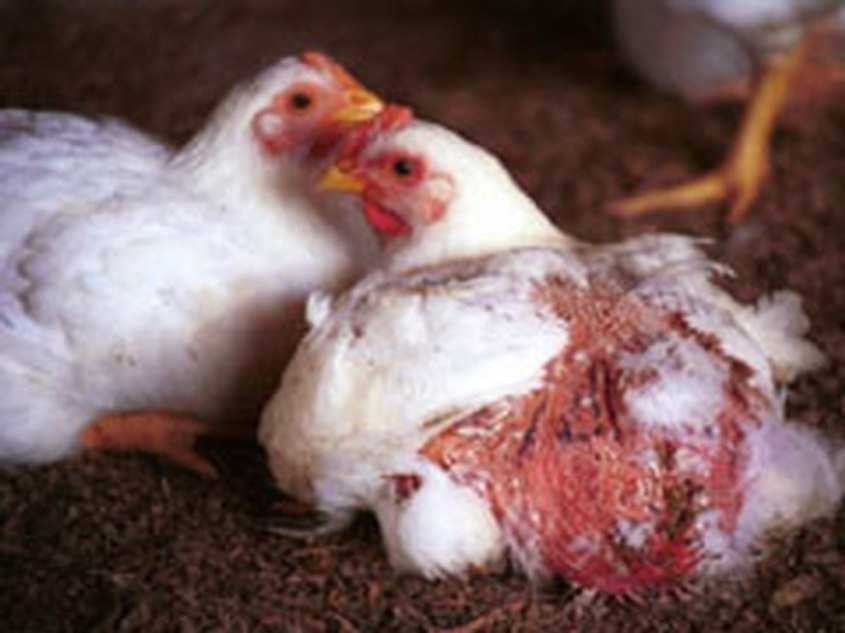 622 million broiler chickens landed in slaughterhouses in 2018, 23 million more than in the previous year. 81 percent of all slaughtered animals in Germany are broiler chickens. Chicken breast fillet, 300 grams for 4 euros. Never before has so much poultry been consumed as it is today. Not only in Germany, but worldwide.

The chicken has become a mass product. The super-bred chicken that grows faster and delivers more meat and eggs than ever before.

A change, an increase in efficiency, which has not only affected the chicken, but the entire agriculture. Fewer and fewer farms are cultivating more and more land and fattening more and more animals. The chicken is the most greasy commercial face of this evolution. A development that makes machines out of animals and forces farmers into a system from which there is hardly any exit. 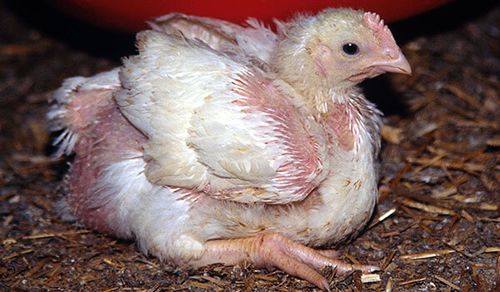 “The Ross 308 is recognized worldwide as a broiler that delivers consistent performance. Producers appreciate the growth rate, feed efficiency and robust performance of the Ross 308. “

This is how it is in the product description of the animal. 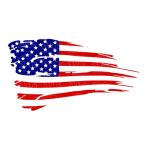 Read on the website of the American company Aviagen, one of the largest broiler breeders in the world. There is also a manual for the Ross 308, called “Broiler Manual.” In addition to tips on temperature control in the house and the recommended amount of feed and the performance of the animals is recorded. Four kilos in 40 days!

In about 40 days, a Ross 308 chicken eats around four kilos of grain and grows two to three kilos. As much and fast as no other farm animal. Pigs have to eat three kilos to put up a kilo of meat, cows, depending on their weight and age between eight and ten kilograms.

“The Ross 308 is the world’s most popular broiler.” This is what the Aviagen Broiler Handbook says.

The American company belongs to the German Erich Wesjohann Group, EW Group for short, a network of 28 German and 81 foreign companies.
The group is the world market leader in chicken genetics.

The EW Group’s product range includes chickens, which have been classified according to their predisposition and nature:
In laying hens and broilers, females and males bred for weight gain. Animals from the laboratory, hybrid chickens, bred from different breeds of chicken.
Most of them give birth to 377 eggs in 85 weeks. 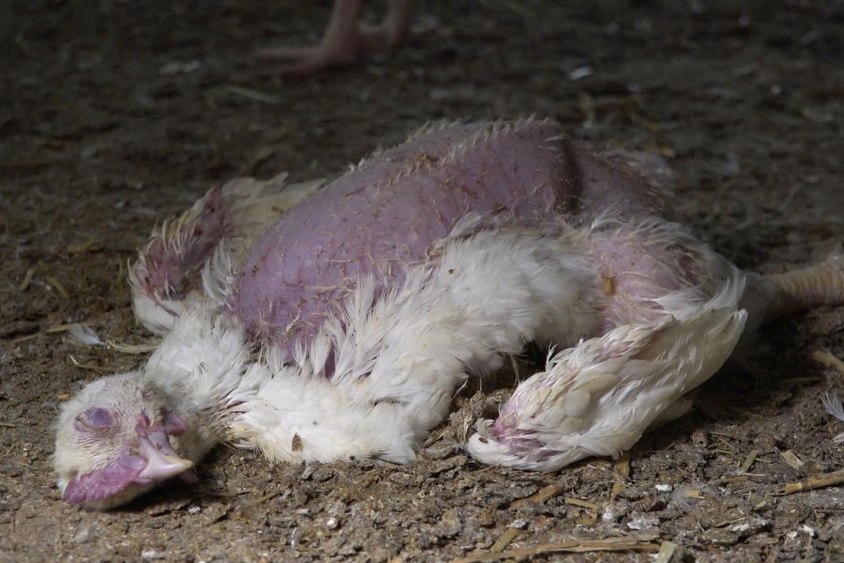 “A chicken, particularly suitable for organic farming, the Ross 308: for an exceptional meat yield”!!!

The brother of “Wiesenhof”

The head behind these high performance animals is Erich Wesjohann.
He is the brother of Paul-Heinz Wesjohann, better known as the heir and owner of the poultry brand Wiesenhof, the largest manufacturer of poultry meat in Germany. Chicken is in the family.!!!

(In 2011, PETA II undercover had taken pictures of a Wiesenhof chicken fattening farm. It was about a scandal. https://www.peta.de/wiesenhof201)

The company center of the EW Group is located in Lower Saxony, Germany.
Here, in a white castle that serves as the company headquarters, Erich Wesjohann rules over the genotype of the chicken. Wesjohann’s chickens are shipped to more than 160 countries. To Kazakhstan, Argentina and France. The success of this expansion lies in the chicken itself, in its genetics.

Through breeding, the EW Group has succeeded in turning the chicken from a tender little bird into a chunk of meat.
In a machine whose body weighs about three kilos more than in 1957, and almost twice as many eggs laid as in the 1960s, today about 300 pieces per year. 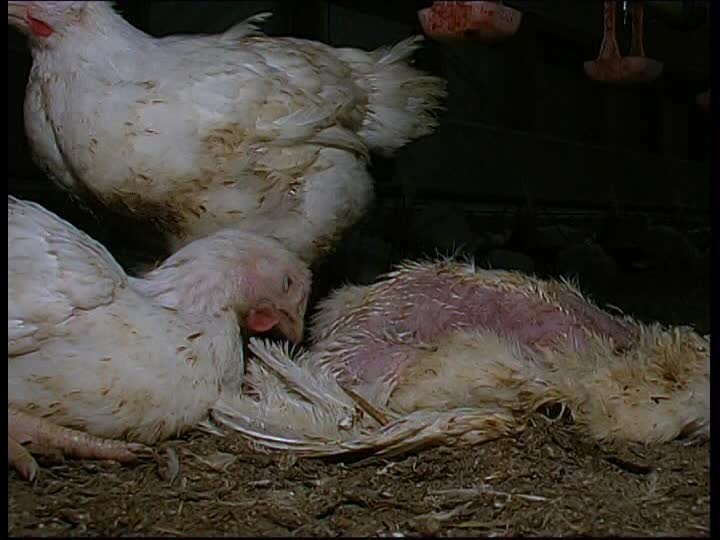 The time of slaughter determines the demand of the customers. If a discounter plans a barbecue with cheap chicken fillet, then the slaughterhouse trucks will arrive on day 35 and not on day 40, at the usual time of slaughter.

Mass is worth it. Not only for chickens, but also for barley or corn. This is mainly due to the agricultural policy of the EU. In Europe, farmers receive subsidies based on the area cultivated. If you have a lot, you get a lot of money. Money that can be used to buy new land again. So the big farms are getting bigger, and small farms are disappearing.

Since the mid-1990s, the number of fattening farms in Germany has shrunk by half. The number of workers fell by one third. This is shown by data in the current agricultural atlas of the Heinrich Böll Foundation. 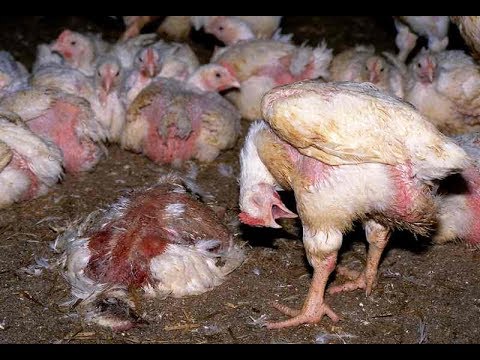 My comment: What we see in the photo is what’s be eaten all around the world.

The offer responds to demand; The buyer is responsible. Every animal killed is a murder that we order!
And companies like Wiesenhof or Aviagen are the ones who commit this murder. The argument that torment breeding is the result of the demand for cheap meat is wrong and hypocritical!

Foie gras e.g. is (allegedly) a delicacy, is offered at maximum prices. The “production” is hard to beat every disgusting animal cruelty.

Just like the caviar. The sturgeons are slashed alive, the eggs removed, the animal thrown away.

Lobster is often thrown alive in boiling water (in Germany even the prescribed killing species).

Just because something is expensive does not mean that the animal has not to suffer.
Likewise, no one can guarantee that expensive chickens on the shelf had a nice life in the stable!
Whether it’s a conventional or a “Ross 308” chicken, in the end, all animals die a cruel death.

It is high time to finish the murderous work of the chicken barons and butchers.