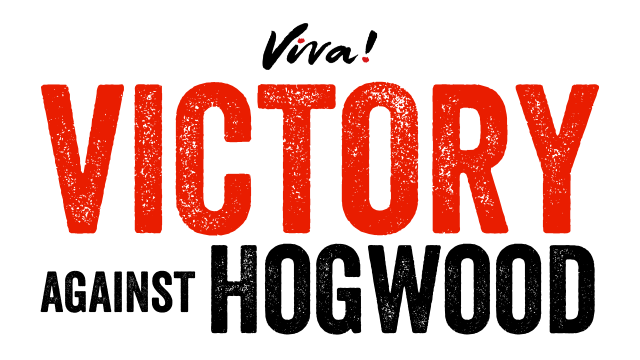 I’m absolutely thrilled to announce that, following our third investigation into Hogwood Farm, Tesco and Red Tractor have finally responded to the cruelty we found there.

The hidden camera footage we obtained of workers abusing pigs at Hogwood Farm has led to Tesco dropping Hogwood as a supplier and Red Tractor suspending their certification.

This is a HUGE victory! We can’t express just how much this decision meant to us, all our amazing supporters, and the thousands of pigs trapped inside Hogwood Farm.

Mark – our work is not over. We’re in production for our groundbreaking documentary – Hogwood: a modern horror story – telling the story of Hogwood and UK factory farming in a way it’s never been told before

Our team installed five hidden cameras across three sheds for a week-long investigation. We released this footage to The Daily Mail and, in response, Tesco and Red Tractor finally withdrew their support from the farm.

The hidden camera footage that we obtained showed horrific abuse by workers at Hogwood – with pigs being routinely beaten and kicked, as well as whacked with doors and cages.

Although we congratulate Tesco and Red Tractor on finally making the right decision, I can’t help but question why it is routinely left to vegan campaigning groups like Viva! to expose the abuse taking place on farms. And why it took three years of investigations for Tesco to act.

Factory farming is an inherently cruel business and we hope that this exposé shows that assurance schemes like Red Tractor cannot be trusted.

We’re not going to stop. Hogwood is huge but it’s just one farm – we’re going to keep campaigning to end this cruelty.

Our investigations were splashed across national newspapers and shared across the world. Yet Tesco, the government, National Pig Association, Trading Standards and Red Tractor repeatedly leaped to Hogwood’s defence.

Since our first investigation, the owners of Hogwood Farm invested thousands of pounds in security – rather than improving conditions for these poor animals. With such priorities, the animals will need us more than ever.

Our undercover investigations shine a light on the inherent cruelty hidden behind these closed doors. Let’s continue the momentum and help others choose compassion over cruelty.

Hogwood Documentary – we’re going to tell their story. Our groundbreaking documentary, Hogwood: a modern horror story, is currently in production and we need your help to fund its production and distribution – so we can get it out to millions of people.

Yours for the animals