WAV Comment – has this grabbed attention ? – well, we are talking about chickens actually, not human lives.  Both sentient creatures; both with feelings and a wish to survive.

“It is the Ministry for Primary Industries’ (MPI) job to monitor that factory farms have working emergency back-up systems. So was this farm being effectively monitored? It looks like yet again, MPI hasn’t had the resources to ensure this factory farm wasn’t breaking the law”.

Lets hope that nightclubs used by the human species are monitored better ! 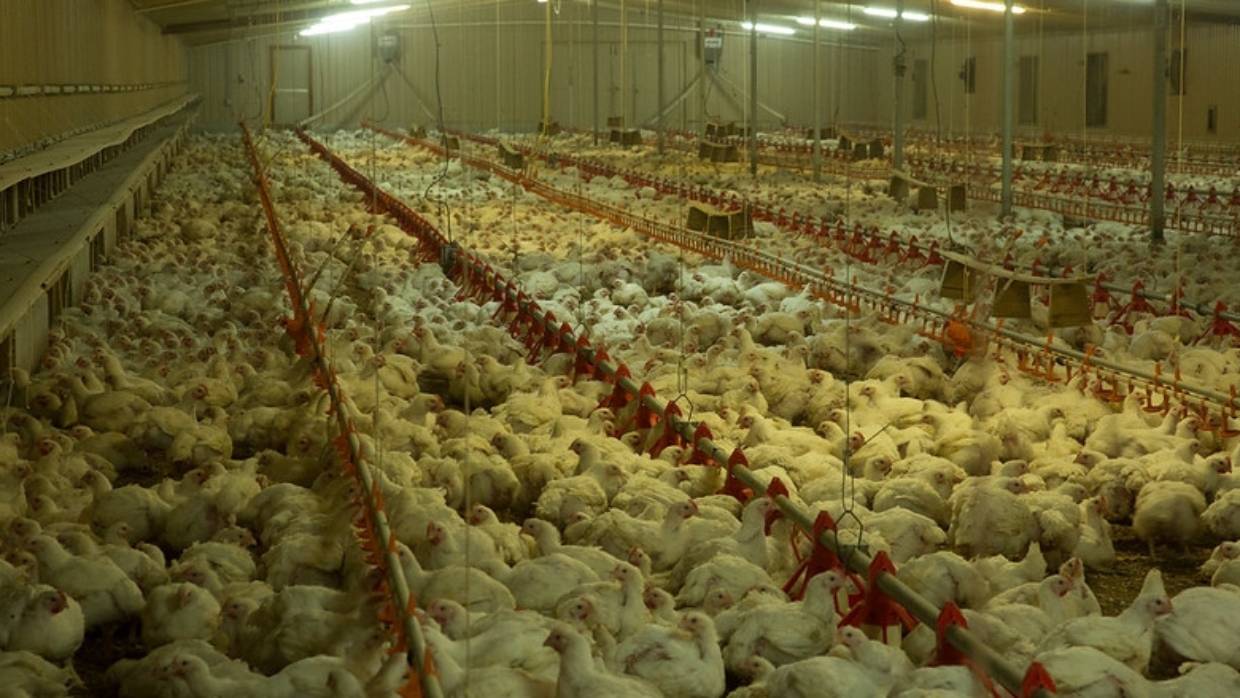 OPINION: Nearly 200,000 deaths by suffocation, because of a power cut. What a tragedy and a terrible way to die.

New Zealand is a nation of animal lovers. We lavish attention on our dogs, we dote on our cats, often valuing them as important members of our families.

If this tragedy had involved dogs or cats, this appalling loss of life would be the lead story on all the news bulletins and the subsequent investigation would be a topic on everyone’s minds for weeks. But when the individuals who perished in such a terrible way are chickens, it’s just a passing bit of shock news.

It is the Ministry for Primary Industries’ (MPI) job to monitor that factory farms have working emergency back-up systems. So was this farm being effectively monitored? It looks like yet again, MPI hasn’t had the resources to ensure this factory farm wasn’t breaking the law

In this case, a simple power cut led to the ventilation supply to these chickens being cut, and both the back-up generator failed and the alarm to alert workers that the chickens were slowly dying.

Less than a year ago, at another West Auckland farm that was also part of Tegel’s supply chain, 50,000 birds burned to death. The details that were made public reported a lack of water available for fighting the fire.

Just last month, ten thousand more chickens perished on a Whanganui chicken farm and another thousand in the Waikato back in June. This is appalling!

As always, when there are massive corporate profits to be made, animals suffer the consequences. Tegel has refused to require its suppliers to fit sprinkler systems to prevent fires from taking hold in chicken sheds. That would cut into profits, wouldn’t it?

These birds are treated as mere production units, rather than living, breathing beings. Even our Animal Welfare Act recognises that chickens are sentient, accepting that they are fully able to experience a range of emotions. Despite this, the chicken meat industry kills 125 million birds a year in New Zealand. So, the loss of 195,000 birds is presumably just a blip on their production schedules, and insurance will soften the blow.

But taking a look behind the walls of these chicken factory farms, we see that these birds suffer even when it’s business as usual.

Highly selectively bred to double in size each week, their bodies just can’t cope. According to a 2013 Ministry for Primary Industries report, up to a third are painfully lame in the last weeks of their short lives and up to ten thousand die a very stressful death of heart failure or are culled, every day in sheds across New Zealand. The Poultry Industry of New Zealand puts that figure at 6000 – but even that is 6000 individuals that are so sick and deformed that they can’t even survive to the age of six-weeks, when most are taken for slaughter.

These are the birds that are out of sight, out of mind, hidden inside barren window-less sheds. Most people only interact with one of these chickens at mealtimes. Chicken meat is so cheap compared with other meats, that it’s eaten almost without thinking by people who would be appalled if they stepped inside a chicken factory-farm. 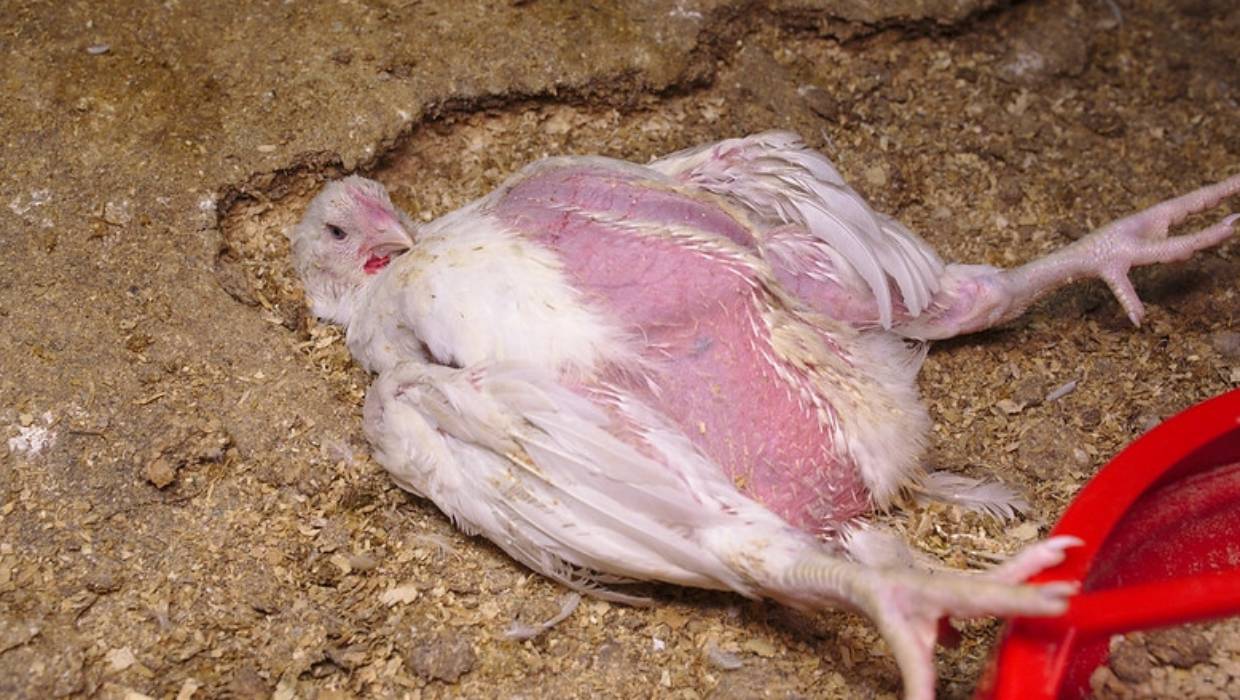 Few people even know what one of these white-feathered, blue-eyed, overgrown baby-birds looks like.

Carolin Günther (Caroletta) works as a painter and illustrator. “About Meat” is a project of the heart.

This book (“That’s how we’ve always done it”) is something for you, if you

surreal and detailed illustrations like.
are a friend of clear words and sharp poetry.
Discrimination, oppression and violence in any form reject.

In addition, the book addresses to all who

like to pet cats and / or dogs.
Chicken nuggets find great and chick-shredding stupid.
Donate to the shelter and eat meat sandwiches.

First and foremost, the illustration book “That’s how we’ve always done it” is for everyone who does it differently.

As a young child, she saw a slaughter, heard and smelled, and soon thereafter stopped eating animals uncompromisingly. That’s 30 years ago.

Today she lives completely vegan and is a public advocate for animal rights and environmental issues. Her illustration series “About Meat” was nominated for the 2018 World Illustration Awards and featured in Greenpeace magazine.

Most of us lovingly caress their dog or cat and bite in the next moment in a roast sausage without the slightest glimmer, what’s actually in it, where it comes from, and what the animal looked like that had to die for it. We can not make the connection between the sausage on our plate and the animal that was this time. Because the so-called useful animals are invisible. Their killing takes place far behind closed doors.

To draw attention to this topic, Carolin Günther recently launched the art project “About Meat”. A main motive of the picture series is the categorization of animals in “inedible” and “edible”. All illustrations were created in classic handwork and follow a common design concept.

With each picture that came in the last few months, she grew with the desire to put it in book form. In cardboard picture book form.

Cardboard picture books explain the world and playfully promote the development of children. Maybe, that works for adults as well.

All pictures are from her picture book: “That’s how we’ve always done it”.