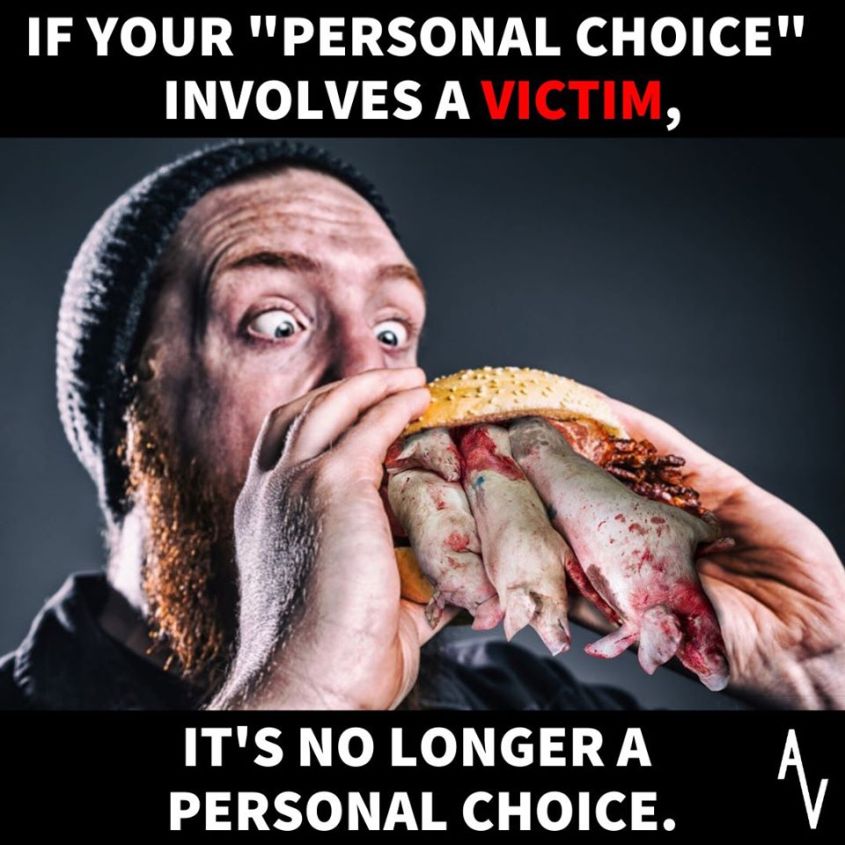 Just how “personal” is it, exactly, to slit the throat of a non-consenting party, dismember their corpse, and put them in a sandwich?
Last time we checked, PERSONAL choices and preferences end JUST THERE – at the body of the person making the choice.

Buying the products of animal oppression is not a “personal choice”- it’s a VIOLATION of someone else’s choice to not be enslaved and murdered!

The video, apparently from China, shows the cruel reality behind meat production, its mechanization and the people involved in the process.
It makes us realize that things can not go on like this.

The filmmaker Ron Fricke is on a world tour and in his impressive video we can see in 6 minutes the madness of industrial meat, milk and egg production, slaughterhouses, supermarkets and fast food – “restaurants”, to the stomach of the consumers, wich in the end it will be removed by a plastic surgery!

The Meat Mafia works similarly all over the world, it is not only China the sinner of the meat industry.
The meat should be as cheap as possible, the profit big; To achieve these goals, every slaughterhouse in the world uses almost all means.
This system works with cheap workers who are under the pressure of a quick “completion” of the slaughter job and therefore treat animals like garbage.

In Germany, we have battle numbers of over 1,500 pigs per hour, in the run. The worker, who is supposed to prick a pig “pet-friendly”, usually has less than two seconds.
Anyone can imagine the likelihood of a mistake, which means torture and agonizing death for the animals for minutes.
As soon as these criminal conditions become known to the public, the corrupt politicians and authorities speak of an exception.

But the problem in factory farming is not the exceptions, it`s the legal framework.

Because even when criminal and illegal practices in slaughterhouses come to light, the judiciary is on the side of the perpetrators, and therefore the perpetrators are not persecuted, but those who expose these crimes.

Whether, how and when the current global animal holocaust comes to an end, is not yet foreseeable.

Pigs engineered to have a small amount of monkey cells have been brought to full term and were even born alive, surviving for a few days after birth. Although the piglets died, it is claimed the experiment – performed in China – marks a major milestone for the future of lab-grown organs.

“This is the first report of full-term pig-monkey chimeras,” Tang Hai of the State Key Laboratory of Stem Cell and Reproductive Biology in Beijing told New Scientist.

The research is part of an ongoing effort to develop animals – whether they are sheep or pigs – that can grow human organs we could then harvest for transplants, a process called xenogeneic organogenesis.

Research has been done on both pig and sheep embryos with transplanted human stem cells; in both cases, the embryos continued to develop until the experiment was deliberately terminated.

That’s because, due to ethical concerns, these chimeras – organisms that incorporate the genetic material of another species – cannot be cultivated or studied in the later stages of embryonic development. Some scientists worry that some of the human stem cells could end up in other parts of the animal or even in its brain, with unintended consequences.

For that reason, in this experiment the team used stem cells from crab-eating macaques (Macaca fascicularis). These were imbued with fluorescent proteins so that they would glow under fluorescent light, and derived to produce fluorescing embryonic cells.

These cells were then injected into over 4,000 five-day-old pig embryos fertilised using IVF; the modified pig embryos were subsequently implanted into sows.

This fiddly and painstaking work produced just 10 piglets that made it to full term and were born alive. And only two of these were chimeric, with between one in 1,000 and one in 10,000 functional monkey cells to pig cells.

The monkey cells had migrated to the heart, liver, lungs, spleen and skin of the piglet hosts, but were not found in other organs, such as testes and ovaries, due to the low rate of chimerism, the researchers said.

Sadly, before a week was out, the piglets died – not just the two chimeras, but the other eight normal piglets, too. Because all the pigs died, Hai told New Scientist, the cause of death likely had less to do with chimerism, and more to do with IVF – a procedure that is notoriously tricky in pigs.

The low chimerism rate is also somewhat discouraging. However, the researchers remain optimistic. Although the birth rate was low, and the pigs didn’t survive, the team now has a wealth of data they can apply to future experiments.

The scientists are planning to try again, increasing the chimeric cell ratio. And they believe their data may help other scientists working in the field.

“Here, we have used monkey cells to explore the potential of reconstructing chimeric human organs in a large animal model,” they wrote in their paper.

“We believe this work will facilitate the development of xenogeneic organogenesis by providing a better understanding of the processes of xenogeneic recognition, fate determination, and the proliferation and differentiation of primate stem cells during porcine development.

“The findings could pave the way toward overcoming the obstacles in the re-engineering of heterogeneous organs and achieve the ultimate goal of human organ reconstruction in a large animal.”

The research has been published in Protein & Cell.

Here in the UK, a different approach is being used which eliminates the use of growing organs from one species and then attempting to transplant them into another – which could be high risk.  It is an opt out system that will work on the policy that anyone who dies can have their organs taken for donation unless they decide to go for the ‘opt out’ option which they can take if they do not wish to donate.

A new opt-out system for organ donation will be in place by 2020 in England, if Parliament approves “Max’s Law”.

Under the plans detailed by ministers, adults will be presumed to be organ donors unless they have specifically recorded their decision not to be.

The government said it would save up to 700 lives each year.

In the UK in 2017, 411 people died before the right donor was found, and more than 5,000 people are currently on the waiting list in England.

A similar opt-out system has been in place in Wales since 2015. Scotland plans to introduce a similar scheme and Northern Ireland has also expressed an interest.