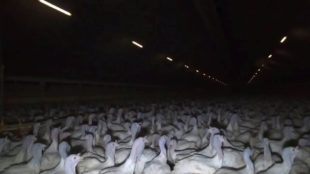 This year’s Christmas dinners in Britain are allegedly coming at the expense of countless turkeys suffering inhumane, barbaric deaths. A three-month-long investigation by an animal advocacy group yielded some horrific accusations against one of the country’s most expansive turkey producers, Gravel Farms.

In deeply disturbing footage, a worker can reportedly be seen snapping two distressed turkeys’ necks with a pair of pliers. This outrageous action could represent just a small sampling of the cruelty these vulnerable birds may endure at the farm.

The use of such “neck crushing devices” is strongly discouraged by the RSPCA and the Humane Slaughter Association. Even turkeys that did not suffer this indignity still seemingly received horrid treatment, according to the investigation.

Many birds apparently died from untreated injuries and wounds. While the country’s most prominent food standards agency has dropped Gravel Farms from its supply chain, the large supermarket chain that sustains much of this farm’s business has not taken similar steps.

The recent footage unearthed from Gravel Farms depicting seemingly grotesque animal cruelty should be a moment of awakening. Have you witnessed the horrific conditions and treatment the turkeys that this farm supplies to you reportedly endure? If you by some chance have not, let’s elaborate.

At least two distressed, innocent living beings allegedly had their necks brutally broken by a worker with crushing pliers. Several more birds reportedly lived for days and weeks with open, increasingly severe wounds to which many eventually succumbed. Is this inhumanity the welfare and hygiene standard that your respected organization desires to present to the public?

If not, make the right decision and act against this alleged cruelty. Don’t support such barbaric atrocities with your money or your silence.

Striking official failure in Steinfurt, in the district (North Rhine-Westphalia), a dying peregrine falcon was found on Wednesday – he had just captured a color-coded domestic pigeon.

The find circumstances clearly indicate a so-called “Kamikaze pigeon” – a living pigeon is prepared with a contact poison. The color is intended to draw the birds of prey’s attention to the pigeon.

Falcon and alleged bait were handed over to the police in Rheine.

But instead of properly handing over the evidence to the responsible veterinary inspection office, it was simply thrown away in the garbage can.

The police rely on the district veterinary office, which is said to have said that there were no known cases of raptor persecution in Steinfurt.
But that’s not true! because this district, with a total of 45 cases since 2005, is one of the regions in Central Europe most affected by this form of environmental crime.

The Lower Nature Conservation Authority of Steinfurt has also made a fool of itself – despite requests from the committee, they had refused to contact the police and urge the animals to be examined.

The committee against the bird murder is currently having a lawyer check to what extent the officials involved have abused their office.

And I mean…They all agree on corruption, ignorance and abuse of their powers.

And straw stupid! so stupid that they should have got the job only through relationships and favors.
Police officers, veterinary officers, criminal police rabble … all stupid like a banana.

These are the instances that are supposed to protect our animals and us from criminals.