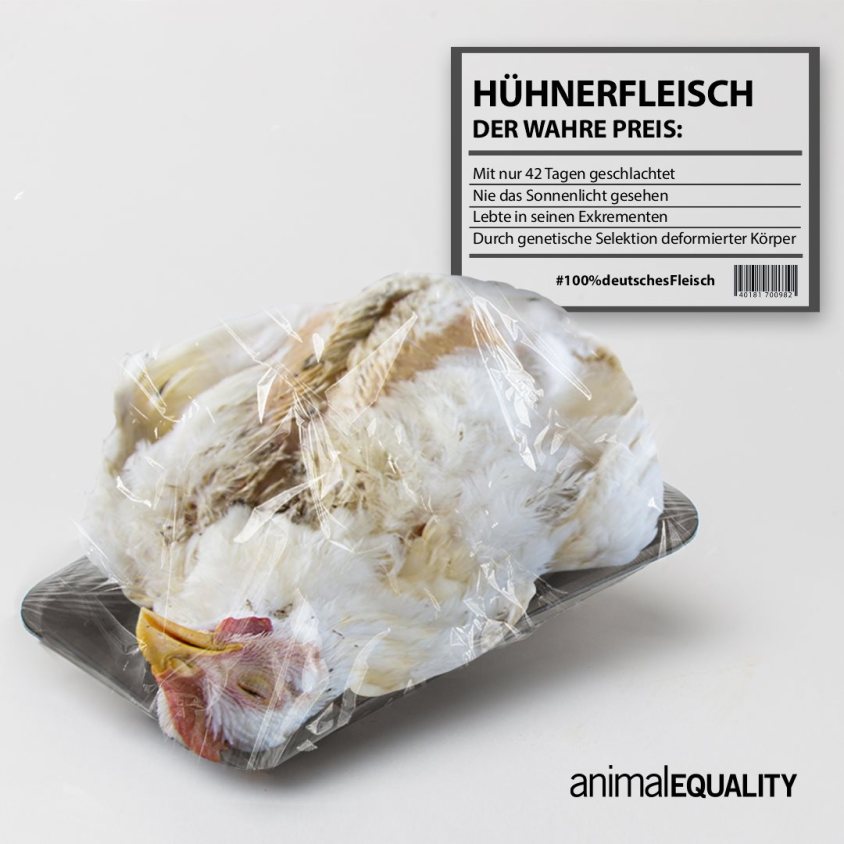 Eating animals is a collaboration on one of the worst crimes in human history.

Around 6,000 rabbits suffer and die each year in the so-called pyrogen test. This is despite the fact that there has been a recognized test method free of animal testing for 10 years. This can no longer be tolerated!
The authorities must finally intervene and ban the rabbit pyrogen test!

Vaccines, infusion solutions, and other medical products must not contain so-called pyrogens. These are fever-inducing substances that e.g. are released by bacteria.
The European Pharmacopoeia prescribes a check of every production unit in order to protect patients from damage.

A test on rabbits has been standard for decades to test products for possible contamination by pyrogens.

For this, rabbits are fixed in a small box in which they cannot move for several hours, and the test substance is injected into an ear vein. If they develop a fever, the production unit is not released for sale. After a certain “period of use”, the rabbits are killed.

In 2018, 6,291 rabbits were used in pyrogen tests nationwide. The numbers in the previous years were similarly high.

An animal-free method, the monocyte activation test (MAT), which works with human blood, was developed 30 years ago and internationally validated in 2005.

In 2010 he was included in the European Pharmacopoeia.

One company that carries out the rabbit test is the LS laboratory in Bad Bocklet in northern Bavaria, Germany.
Here more than 82% of the rabbit tests in Germany are carried out.

It can no longer be accepted that even though an animal-free test method is recognized, thousands of rabbits still suffer and die for the pyrogen test in Germany alone.
The rabbit test must be deleted in the European Pharmacopoeia and the approval authorities must prohibit the test!

Comment and Information: A rabbit pyrogen test has been used since the 1940s. In this test, the rabbits are locked in full-body holders, then they are injected with a test substance into the blood and their body temperature is monitored. The possible effects on the animals range from fever to breathing problems to fatal shock.

Despite its long use, the rabbit pyrogen test has never been formally reliable to determine its reliability or relevance to humans. Rather, there are a number of well-documented drawbacks to this test, including significant differences in the sensitivity of the species and breed.

In the pharmaceutical industry, pyrogen determination is mandatory to prevent life-threatening fever reactions that can be caused by both microbial and non-microbial substances.

The monocyte activation test (MAT) was included in the European Pharmacopoeia (EP) in 2010 after the publication of international validations.

This test was developed as an alternative to animal-based methods and should offer a possibility to carry out pyrogen tests in a human in vitro system.
In addition, this determination can be carried out in vitro with greater speed and less expense than by animal experiments.

Despite all of these benefits, the Food and Drug Monitoring Agency (FDA) continues to rely on animal testing to assess the pyrogenic potential of new drugs and pharmaceuticals.

Animal testing is a waste of time and money, associated with a high risk of our health.
And with senseless cruelty to animals that exclude ethics and humanity.

Without animal testing, medicine would be much further, because animal testing is stopping medical progress because of its false results.

Right now, as you read this, billions of frogs across the world are being tortured, maimed, and killed. Stolen from the wild, they die in pain. It is estimated that in Asia alone, between 180 million and a billion frogs are currently stolen each year for use in traditional ‘medicine’.

In Vietnam and Japan, live bullfrogs are served to diners, filleted while their hearts are still beating.

Video footage from Cambodia shows frogs kicking and squirming in pain as their snouts and rear legs are cut off with scissors. Still alive, they are thrown in a pile of other maimed frogs and left to endure a slow death. These frogs are not only massacred for their legs, they are also turned into trinkets and curios for the tourist industry.

The cruelty being inflicted on frogs for cosmetics or when they are barbarically killed for a sick frill for diners is so blatant, so abhorrent and so dangerous that governments must act now.

The havoc with nature caused by this trade has potentially irreversible negative consequences for the entire planet.

Frogs play a vital role in the food chain, as both predators and prey. As tadpoles, frogs eat algae, reducing the chances of algal contamination and they, in turn, are an important source of food for birds, fish, monkeys and snakes.

Right now, frogs are racing headlong to extinction, but if we act fast to stop the international trade, we will give the frogs a better chance of survival and save billions of creatures from merciless cruelty.

Every single animal life is important. Please support us in our efforts

… and Taiwan – your action needed to drag these primitives into a cruelty free modern world.  Read on and sign.

is currently accepting public comments on its proposed new regulation

that would recommend—and allow—that food and beverage companies conduct painful and deadly experiments on animals in a misleading attempt to support dubious health claims for their products and ingredients.

The experiments are undoubtedly cruel—and also scientifically useless because of the significant biological differences between rats and humans. Numerous countries around the world—including the U.S. and Canada and those in the European Union—don’t suggest that animal tests be conducted in order to make health claims for foods.

Taiwan needs to get in sync with the global community and eliminate these experiments, not recommend or allow them. Please ACT NOW to speak up for animals before the July 26 deadline.

WAV Comment – This is disgusting and illegal; yet cretins of the human race pump money into a go fund me site to clear wildlife from their area.  It just shows what some are like – as we say; cretins; probably too good a word for them.  Lets hope that all involved in this terrible crime to wildlife have the full force of the legal system thrown at them.

Also; .lets hope that all the residents who funded this killing spree of an innocent animal NEVER get their donations back – we hope the money will be given to Project Coyote by an act of law  Disgusting humans !

The video shows—in graphic detail—the coyote pup struggling in the trap, desperate to free itself, with no cover in the searing summer heat. It is believed that the pup suffered in the trap for days before local residents heard it crying in pain and came to its rescue. The animal’s distress was so great, as is evident in the video, that at one point a caring girl felt compelled to offer water to the pup, but it suffered such severe injuries from the trap that it was later euthanized by Los Angeles Animal Services.

“Ironically this coyote was trapped through a GoFundMe campaign organized by Valley Village resident Lisa Johnson Mandell who solicited money from neighbors for ‘humane wildlife removal,’” said Project Coyote’s Southern California Representative Randi Feilich. “In talking to neighborhood residents, I found they were shocked to learn that donations were used to hire a trapper to set cruel, indiscriminate and illegal leghold traps. According to Feilich, the GoFundMe page has since been deactivated.

The trapper is believed to have violated multiple state laws and is now under investigation by Los Angeles Animal Cruelty Task Force and the California Department of Wildlife. “Leghold traps were banned by California voters in 1998 so this trap set is clearly in violation of that law,” said Camilla Fox, Project Coyote Founder and Executive Director. “Moreover, California law requires that trappers check their traps daily and obtain written permission from property owners when setting traps less than 150 yards from a residence, which this trapper clearly failed to do.”

“We commend the multiple law enforcement agencies involved in this case for their due diligence in investigating this incident, and we hope the trapper and anyone else responsible will receive the stiffest sentence possible under the law,” said Feilich, who spoke to authorities and neighborhood residents in producing the video released on Project Coyote’s YouTube page and on Valley Village’s Nextdoor site. “We also believe many residents who generously donated money to this GoFundMe page were misled by the organizer into thinking they were hiring a humane wildlife control business to remove the coyote, but instead their donations were used to fund the worst type of illegal animal cruelty, resulting in a slow and painful death to a young coyote pup.”

“Despite a state law banning leghold traps, many private trappers and ‘pest’ control businesses continue to use them in clear violation of the law,” said Fox. “Until these trappers receive more than a slap on the wrist, they will continue to flagrantly violate the law. We must crackdown on this unconscionable cruelty so another animal does not suffer such a painful and needless death.”

Watch the video of the captured coyote here.

Regards Mark – and as they say: