Slavica has made the world a better place for animals.
If her animal friends knew she isn’t there anymore, they would come to her deathbed and cry.

She did a lot for them and she would have continued to do so even though her strength had already given way.
Because she knew it:  the best motivation for not giving up is to continue doing everything to reduce animal pain and suffering.

The world is poorer after the death of such people.
They have not only consumed goods and generated garbage, but they have done something worthwhile for those who have no rights, for the defenseless.
They never betrayed their friends, the animals.
They are people who have done their best, everything they could, and if they had one more life to go, they would give it to make this world a better place for the animals.

We are sad, infinitely sad.
We promise that we will continue the fight and, like you, will do everything we can for those you loved and protected, for the animals. 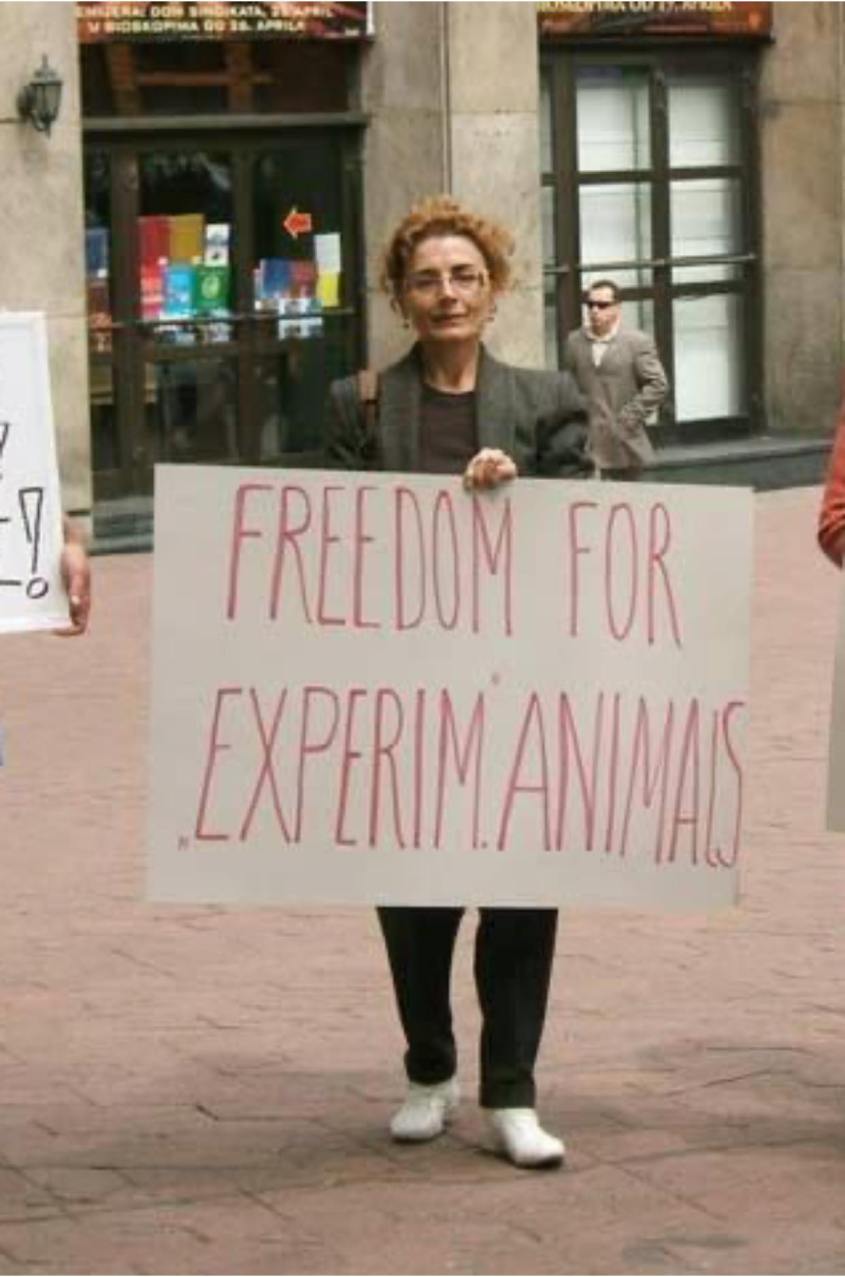 Today, 17/7/20 I have been sent a very sad message from friends and welfare people, Branka and Pavel, who operate ARKA in Serbia.  The message reads:

We are so sorry to inform you that Slavica (EPAR) died Yesterday morning at 3h30’.

Recently, apart of her main illness, she fell and broke thigh bone. She had to go to the hospital for the surgery, unfortunately she didn’t recover.

She really loved animals and did so much for them, we’ll miss her very much.

Slavica first made contact with me back in 2004; and after deciding on a campaign route; ‘Serbian Animals Voice’ was formed.

Slavica and I were in almost daily contact re the situation for animals in Serbia.  She was in Serbia; and I was in England; so communication (language) to get the correct message out on SAV was not an easy thing in those early days.  It was very much a case of info coming in check – draft and send to Slavica for the ok.  Only once that we were both happy with the content did we publish our data.

Two very large campaigns we worked on was to try and prevent the construction of a ski lift facility at Stara Planina – here are some links:

This was not about stray animals, but an environmental issue we fought:

We battled with the EU about environmental issues at Stara; again, they did not want to take action regarding the endangered species (wildlife) lists we had provided.

In the end it was not good news – corruption won; but we did help with some other victories:

And also the work with ‘Respect for Animals’, here in Nottingham UK, to achieve the fur farming ban, which came into force at the start of 2019.  Read more:

Respect for Animals – against all fur : http://www.respectforanimals.org/

Another issue we very much got involved with was regarding the export of live sheep to Israel.  The Serbian government denied that there was any involvement with Serbia and the exported sheep; so much so that attempted to make threats against all who were involved and exposing the business.  With help and advice and input from Salavica, I chased up the issue at the EU – see more here:

You have to remember that the Serbian government made many threats to animal activists; and that included closing down Slavica’s stray dog shelter.  But all was not lost, in the end the Serbian government were forced (under activists pressure) to come clean and tell the EU that the exported sheep DID originate and get exported from Serbia.  This was confirmed in a letter from the EU to Mark, which you can read below:

So you see, if you know you are right with what you say, you have to take chances and fight the fight; all the way.  This issue of sheep exports was a big win for us; especially Slavica, who was so very involved, despite the government threats to close down her shelter.

More reading on this:

We also worked together re the animals at Palic Zoo in Serbia; and especially relating to a brown bear which was kept in a very confined environment.  Here we worked with the Born Free group in London who had set up reports on animal zoos across the EU.  See it here:

See the pictures and our info about Palic Zoo here:

Slavica was a fantastic person to know; and an even better campaigner.  I am proud to have been able to call her a good friend and to have been involved with her fighting to improve the welfare of animals in Serbia..  As well as her dedication to animals rights, Slavica was also a medical doctor.  Slavica worked as the senior / manager of the department for tumours at the city hospital in Subotica (Serbia) for over 15 years.

She undertook numerous operations associated with tumours in gynecology, such as the Wertheim – Meigs technique.

She operated her own private gynecology facility known as “Ginekos”, within Subotica city, Serbia.

Slavica has always supported animal welfare / rights and allocated the vast majority of the finances from her gynecology speciality into funding the construction and operations of stray dog and cat shelters, and she often had to endure personal attack, criticism and negative experiences from many of the local authorities around the Subotica area.

Slavica endured personal criticism of her work for the animals by others working within administration departments of Belgrade City authority.

With massive input from Slavica; and using SAV as an information tool; we also managed to get the illegal hell hole (VUK) zoo at Novi Pazar closed down.  You can see the conditions in which the animals were illegally kept in the following:

From SAV ‘About Us’ – https://serbiananimalsvoice.com/about-us/

Slavica is the President of the organisation EPAR, which is based in Subotica, Serbia.  In 2010, Slavica stopped running the animal shelter part of EPAR, which was called Friend – EPAR.  The animal shelter section of EPAR has now been taken over by a lady named Adriana.  Friend – EPAR shelter was the biggest No Kill shelter in Serbia; and this policy is now continuing through Adriana.

Adriana has now given a new name to the shelter that she works with; the old Friend – EPAR shelter.  This shelter is now called (shelter) ALEX.

Slavica continues to run EPAR as an organisation, but this is now specifically dedicated to more legal matters such as campaigning for the implementation of existing national legislation; bringing charges against those who are illegally doing cruelty to animals, and charges against hunters, environmental destruction work etc.

Important – the links below show many photographs of the old Friend – EPAR shelter.

Here below are some old photograph links to what was originally Friend – EPAR shelter, and which is now called ALEX:

Slavica worked as the senior / manager of the department for tumors at the city hospital in Subotica (Serbia) for over 15 years.

She has undertaken numerous operations associated with tumors in gynecology, such as the Wertheim – Meigs technique.

She now operates her own private gynecology facility known as “Ginekos”, still within Subotica city.

Slavica has always supported animal welfare / rights. She allocates the vast majority of the finances from her gynecology speciality into funding the construction and operations of stray dog and cat shelters, and has often had to endure personal attack, criticism and negative experiences from many of the local authorities around the Subotica area.

Slavica has endured personal criticism of her work for the animals by others working within administration departments of Belgrade City authority.

Slavica shares her home with animals that she has rescued from the local streets as strays.

Slavica was a great personal friend and an even better campaigner friend for all the animals.  She lived her life to the full in so many ways and tried to make Serbia a better place for animals.

I close by saying if there were a lot more ‘Slavica’s’ in the world, then it would be a much better place.