Dear friends of the rainforest,

The primatologist Bethan Morgan made a sensational discovery in 2002: she was the first scientist to spot gorillas in the Ebo forest. More than 200 kilometers away from relatives – pssibly a new subspecies!

The forest literally has it all: According to current research, the approximately 700 Nigeria-Cameroon chimpanzees are the only ones worldwide who crack nuts with wooden stones and hammers and catch termites with sticks. In other regions, primates master only one of the two techniques.

For centuries, the population has lived in more than 40 villages in and around the Ebo Forest without endangering it. The locals see him as the land of the ancestors, go hunting there, fish, collect plants in the forest for their nutrition and medicine, and do farming on a small scale.
But nature and people’s livelihood are in danger!

The Cameroon government has converted 150,000 hectares of the Ebo Forest into two logging concessions, an area twice the size of Hamburg. The population was neither consulted nor informed, and their rights to their ancestral land and their say were ignored.

Logging would result in devastating ecological, social and climatological damage, as it is often the first step in the extensive destruction of ecosystems. It is followed by poachers, settlers and land speculators. Villagers lose their livelihood and are more exposed to new diseases.

The population, scientists and environmentalists are alarmed and are fighting for the protection of the Ebo forest and the livelihood of the locals. Please support this with your signature.

The Ebo forest is home to a mystery population of gorillas, only discovered by scientists in 2002. Two subspecies of gorilla are found in Cameroon, the Western lowland gorilla (Gorilla gorilla gorilla) and a small population of Cross River gorillas (Gorilla Gorilla diehli). Between these two populations, there is a third isolated Ebo population, completely cut-off from other sub-species, with no other populations found within a 200 kilometer (125 mile) radius. Photo by Rhett A. Butler

Background information: More than 160 species of birds live in the Ebo Forest; many of them are endemic and do not occur anywhere else in the world. The same applies to at least twelve plant species known to science.  Despite intensive research work, the full range of species is far from being recorded.

END_OF_DOCUMENT_TOKEN_TO_BE_REPLACED

Today we have launched the second phase of our campaign calling on the UK Government to ban the importation of foie gras made by force-feeding.

The force-feeding of animals is currently illegal on animal welfare grounds in the UK; despite this, imports of products involving force-feeding are permitted.

Will you help us urge the Government to ban this cruel ‘delicacy’ by signing our renewed petition? Our ask is now more urgent than ever, and with a new Government in place since we began our campaign in 2017, we have made the decision to launch a petition specifically directed at influential policy-makers – George Eustice and Lord Zac Goldsmith – who are currently in the position to be able to put in place a ban.

Treasured comedian, TV personality and animal lover, Alan Carr, is the latest celebrity to support our campaign, which was featured in The Mirror today.

Animal Equality has visited several foie gras farms over the years, exposing harrowing scenes of severe animal suffering. Terrified ducks and geese desperately struggle during ‘gavage’, where a metal tube is brutally forced down their throats to fatten their livers up. The birds endure severe physical pain and mental anguish throughout their short lives.

A ban would spare 250,000 birds every year from a lifetime of suffering for this so-called ‘speciality’ dish, but we need your help to make this a reality.

With the Brexit transition period coming to an end on 31st December 2020, the Government has a short and ideal window of time to put in place measures to enact a ban. We are urging Environment Secretary, George Eustice, and Minister, Lord Goldsmith, to take action and commit to a ban, effective 1st January 2021.

Plenty of actions and things to do – please click on the following link for full details: 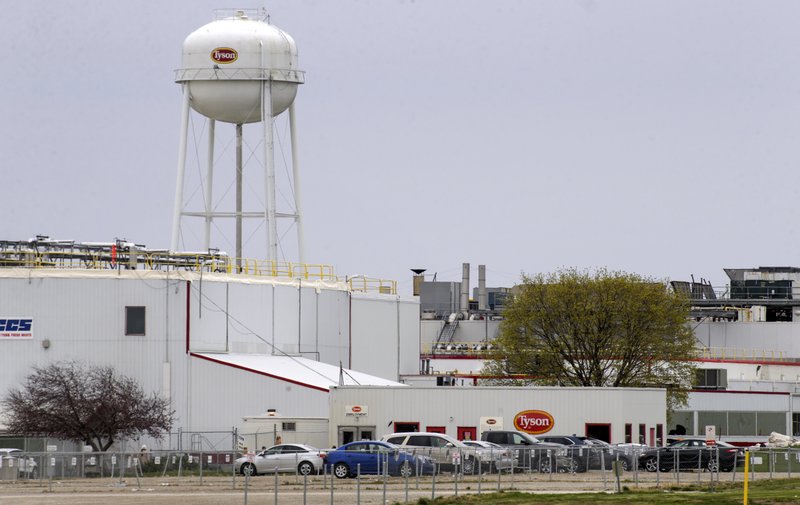 Outbreak at Iowa pork plant was larger than state reported

The department announced at a May 5 news conference that 221 employees at the Tyson Foods pork processing plant in Columbus Junction had tested positive for COVID-19.

But days earlier, Tyson officials told Iowa workplace safety regulators during an inspection that 522 plant employees had been infected to their knowledge, documents obtained through the open records law show.

A dozen of the plant’s roughly 1,300 workers were believed to have been hospitalized by then, and two died after contracting the virus, Tyson officials told the Iowa Occupational Safety and Health Administration.

The discrepancy adds to mounting questions that the state health department faces about its handling of public information during the pandemic. The department last week forced out its longtime spokeswoman, who said she was ousted for pushing hard to fulfill media requests and that the agency’s delays and scripted talking points were embarrassing.

The agency has also faced criticism for seeking to charge thousands of dollars for open records requests and for not routinely announcing outbreaks in workplaces, among other things. The department said it has “gone above and beyond to provide up-to-date and comprehensive information” to the public.

The early April outbreak in Columbus Junction was the first of several at meatpacking plants across the state as the virus spread through crowded workplaces.

Republican Gov. Kim Reynolds took a pro-industry approach to managing those outbreaks in Iowa, the top pork-producing state. She worked with executives to continue production even as thousands of workers became infected and some died, and she applauded President Donald Trump’s order to keep such plants open throughout the country.

On May 5, Reynolds said at her then-daily news briefing that the public health department had been compiling data from surveillance testing to track outbreaks, which the state defines as at least 10 percent of employees absent or ill.

She turned over the podium to health department’s deputy director, Sarah Reisetter, who said the Tyson plants in Columbus Junction, Perry and Waterloo and two other workplaces had confirmed outbreaks. Reisetter said the Waterloo plant had 444 positive cases, but county officials said days later it actually had more than 1,000.

As for Columbus Junction, department spokeswoman Amy McCoy said the 221 case figure announced by Reisetter reflected the results of the department’s testing and what it “could verify from our data systems” at the time.

“Keep in mind, we had just established an outbreak definition, and wanted to share the information we had available,” she said. “Since that initial round of testing back in April, the testing reporting process has significantly improved.”

The department never updated the number of confirmed infections in Columbus Junction. Unlike outbreaks at long-term care facilities, the department does not post workplace outbreaks on the state’s coronavirus website.

At the May 5 briefing, Reisetter said that the 221 cases reflected 26 percent of those tested, which would be 850 total tests.

Tyson spokesman Gary Mickelson said the number of infections announced by the state appeared to reflect only the first round of testing at the plant and that additional testing had uncovered hundreds of more cases.

“Coordinating facility-wide testing and obtaining results is a complex process that takes time,” he said.

But it’s unclear why the department would not have the full testing results that Tyson described to Iowa OSHA. The department, along with county health officials, had conducted the mass testing of workers weeks earlier.

Tyson officials said they learned of the first case in Columbus Junction on April 1 and idled the plant four days later after 29 workers tested positive, according to an Iowa OSHA inspection report.

The governor sent 1,100 testing kits to the county for testing during the two-week shutdown. The plant reopened April 20 with new safety measures, and Mickelson said the company isn’t aware of any current infections there.

Iowa OSHA opened an inquiry after seeing media reports that two workers had died from the virus and inspected the plant on April 30, walking through and meeting with several Tyson officials.

“There were 522 positive COVID-19 cases to the best of the company’s knowledge,” the inspection report says.

Tyson’s plant manager told inspectors that communication between the company and public health officials was “not efficient” and that information about the positive cases wasn’t available for days after testing, the report said.

Iowa OSHA did not cite Tyson for any workplace safety violations, saying the company “was trying to follow the best CDC guidance at the given time” and recommendations were rapidly changing.