A decade ago, there were at least a dozen chimpanzees working in Hollywood. Now there are none.
And it’s all thanks to campaigns like PETA’s to get live great apes out of entertainment—and to the dedication of animal rights activists.

There are officially no more chimpanzees in Hollywood! 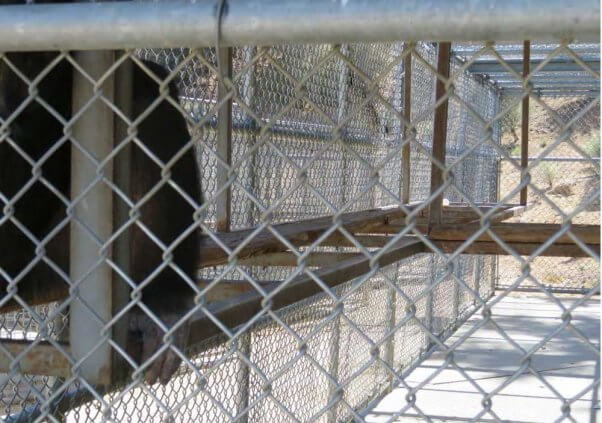 Last year, notorious exhibitor Steve Martin’s Working Wildlife dumped the last chimpanzees forced to appear in commercials and other Hollywood productions, including Eli and Susie, at Wildlife Waystation, a now-defunct pseudo-sanctuary near Los Angeles.
The pair were considered useless to the industry after they’d grown too large. 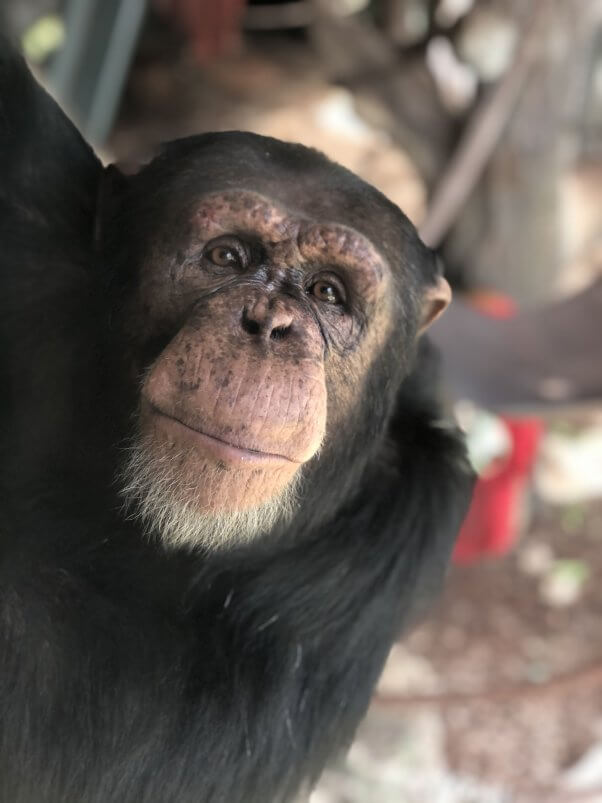 On June 26, Lincoln Park Zoo (LPZ) announced that it had welcomed Eli (pictured above) and Susie (pictured below) as permanent lifetime residents. 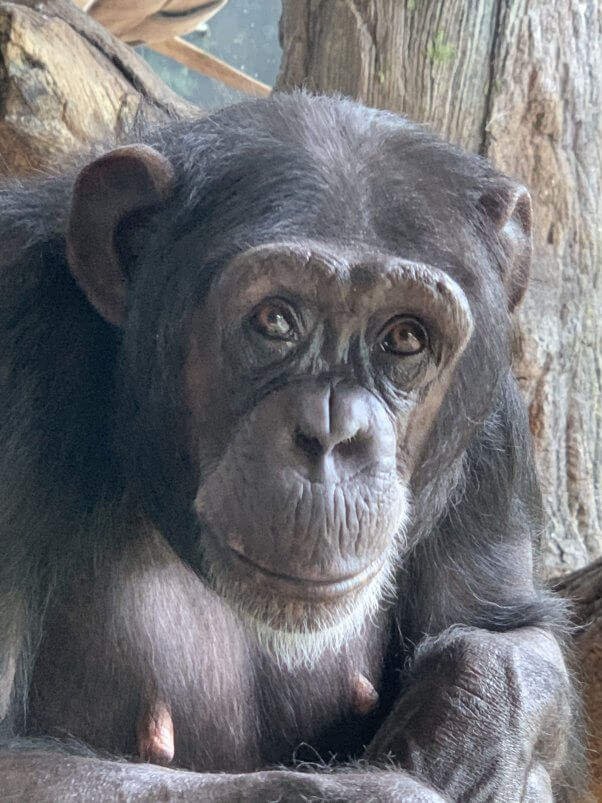 There, the pair will receive the highest-quality care and have the opportunity to integrate into a larger social group of chimpanzees. They’ll live in an enriching habitat that provides for their species-specific needs and receive excellent veterinary care.

PETA campaigned against productions that used Eli and Susie, too, and scored multiple victories for the duo and other exploited chimpanzees.
In 2015, after we sent a letter to MasterChef Junior’s judge and executive producer, Gordon Ramsay, explaining that chimpanzee “actors” are removed from their highly protective mothers shortly after birth, Ramsay agreed to pull footage featuring Eli from upcoming episodes of the hit cooking show.

In 2016, GEICO’s ad agency signed our Great Ape Humane Pledge, agreeing to leave great apes out of its advertising.

END_OF_DOCUMENT_TOKEN_TO_BE_REPLACED

I am taking some time out today to show you something which is very special to me.  As some of you may know; I do Bonsai trees for a hobby; and everything / anything to do with horticulture and plants holds a special place for me.

Being English; I want to give you a few links to the Royal Botanic Gardens which are in West London.  Boy are they special.  The ‘other’ pert of Kew is called ‘Wakehurst Place’ and is located in Sussex (county) which is a just outside of London.  Wakehurst is home to the world famous ‘Millennium Seed Bank’ which collects and stores seeds for as many of the worlds plants as possible – in case they ever become extinct in the wild; they can then be germinated at the seed bank.

Here are some links to Kew, London:

Virtual Kew – visit and explore all the beautiful attractions at the gardens virtually:

And Wakehurst and the seed bank:

I will leave you to explore these wonderful sites which are just so fantastic;

After 18 months in development, Carnation releases a new oat- and rice-based vegan condensed milk made especially for use in pie, fudge, and cheesecake.

In September, dairy brand Carnation will release a vegan version of its condensed milk at supermarket chain Ocado in the United Kingdom.

The new product will retail for slightly more than its animal-based counterpart and was created to be used in baking for “an extra fudgy flavour and texture to banoffee pie, fudge, brownies, and cheesecake.”

Carnation parent company Nestlé developed the new vegan condensed milk, made with oat and rice flour, over the course of 18 months. “It has been a challenge for vegans to find suitable alternatives to make dairy or caramel-based sweets treats or desserts, without having to compromise on taste, texture, or appearance,” Vittoria Simms, Nestlé Marketing Lead for Dairy Brands UK, told The Grocer.

The new vegan Carnation condensed milk will also be available at Tesco and Morrisons supermarkets in October.

Please do NOT give your support to this abuse below by doing dairy: there are now dozens of vegan cruelty free milk alternatives.

It is a disgusting, dirty, animal abusing business – been there and got the T shirt. Read more at:

‘I used to eat anything I could get my fat fingers on. But I’m plant-based now and I’m trying to be healthy as I possibly can’

Former powerlifter and bodybuilder C.T Fletcher has promoted the plant-based lifestyle to his 2.1 million Instagram followers.

Fletcher has posted several photos and videos of his plant-based meals, including vegan protein shakes, banana and peanut butter snacks, and meatless burgers.

‘I’m trying to be healthy’

“Seems like right around midnight some s**t hit my ass and I just turn into a ‘snack hound’… Especially since we [have] been in lockdown,” Fletcher wrote on Instagram.

“I used to eat anything I could get my fat f***ing fingers on. But I’m plant-based now and I’m trying to be healthy as I possibly can these days.”

In another post, the athlete is pictured cooking meat-free patties from Trifecta – a vegan meal delivery service in the U.S.

He wrote: “I still eat four burgers for lunch, but these days the burgers are made from pea and rice protein and wrapped in lettuce. No meat for me.”

Phil Hogan https://en.wikipedia.org/wiki/Phil_Hogan  was the European Commissioner for Agriculture and Rural Development between 2014 and 2019.

He is PRO live animal exports; and with his position at the EU, we would go as far as to say he (Illegally for his position) promoted Irish farming – something any Commissioner of the EU should NOT be allowed to do.

What do commissioner do?

https://www.thejournal.ie/phil-hogan-love-exports-texts-1978127-Mar2015/   –   The Commissioner began his response by telling the woman that he would not be “bullied by 500 text messages I’ve got on my phone during the course of the day on animal farming and animal welfare issues”.

“If you think that will work with me you can certainly forget about it. That’s a campaigning tool that should be well gotten rid of at this stage.”

Animal welfare groups have warned that an upcoming shipment of young bulls from Ireland to Libya could contravene live export laws.

The shipment, which is expected to consist of 2,000 bulls, would be the fourth this year from Ireland. It is set to leave on Wednesday next week from the port of Cork in south-west Ireland. Previous shipments of livestock have arrived in the Libyan port of Misrata.

NGOs objected to live animal exports to Libya in a recent letter to the European commission and EU agriculture council. The country has been in chaos since the Arab spring uprisings and a Nato bombing campaign that toppled its leader, Muammar Gaddafi, in 2011.

Animals have died on previous shipments to Libya from Ireland, a voyage of about nine days. Caroline Rowley, founder of Irish welfare organisation Ethical Farming Ireland, said she believed the Libya shipments breached several regulations including (EC) No 1/2005, which covers the protection of animals during transport and related operations, the European communities (protection of animals during transport) regulations 2006 and Ireland’s 2013. Animal Health and Welfare Act. All say animals must not be treated or transported in a way likely to cause injury or unnecessary suffering.

“Sending livestock on a long sea journey, where there will be illness, injuries and fatalities, to a country in a state of chaos and lawlessness is unacceptable,” Rowley said.

Olga Kikou, head of Compassion in World Farming EU, said the shipment also appeared to contravene the treaty on the functioning of the EU, with regard to welfare and the security situation in Libya.

The treaty states that “since animals are sentient beings” full regard must be paid to their welfare requirements “while respecting the legislative or administrative provisions and customs of the member states”.

“The EU should not be sending animals to war zones, it would be impossible to guarantee even the most basic level of protection there. This cannot happen for humans, and it is certain that for animals it would be even worse,” Kikou said.

The Irish government says live export within the EU and beyond is a “vital component” of its livestock industry, increasing competition and boosting animal prices. The latest available figures show live exports earned the country more than €458m (£417m) in 2019.

Responding to the claims its live exports to Libya breached regulations, Ireland’s Department of Agriculture, Food and the Marine (DAFM) said in an email it was “satisfied that exports are not in contravention of Article 13 and that journeys certified for export are done in compliance with EU legislation” and in “full compliance with the legislative requirements of EU Regulation No 1 of 2005”.

The DAFM email added that the mortality rate over the three previous shipments to Libya this year was 0.19% and said the date of the upcoming shipment had already been delayed to “late next week dependant on several factors including weather conditions”.