In Germany, up to 50 million male chicks are killed each year on the first day of their lives because they are not profitable for the egg industry. They cannot lay eggs and they put on meat much more slowly and less than chickens that are specially bred for meat production.

These so-called ones– day-old chicks are mostly suffocated by gas or shredded alive.
Germany and France aim to phase out this practice by the end of 2021.

In order to increase the pressure on international politics and to end the cruel chick killing as widely as possible, our colleagues from Animal Equality in Italy, Spain, and Brazil have now started a campaign.
The aim is to convince the respective governments of the countries to set a good example, to find alternatives, and to subsidize them financially. 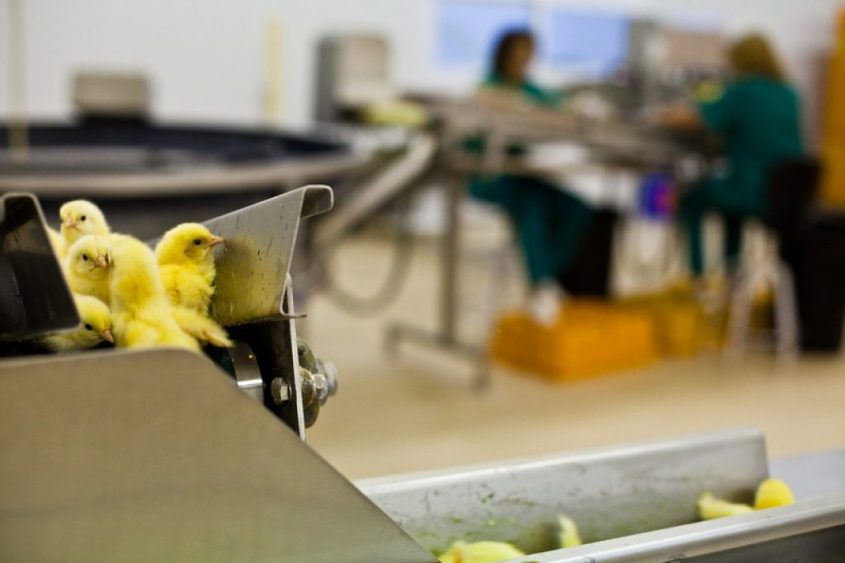 There are already different approaches for alternatives to chick killing. A basic distinction is made between three alternatives:

the above-mentioned gender determination in the egg,
the rearing of male chicks for meat production (broiler fattening mast) and
the breeding of so-called dual-use breeds.
Both the fattening of the rooster cocks and the “dual-use chicken” are already practiced to a certain extent, especially by organic farms.

However, only every tenth egg in Germany comes from organic farming and not all of these farms do without killing the male chicks. The percentage of eggs for which no male chick was killed is therefore negligible. 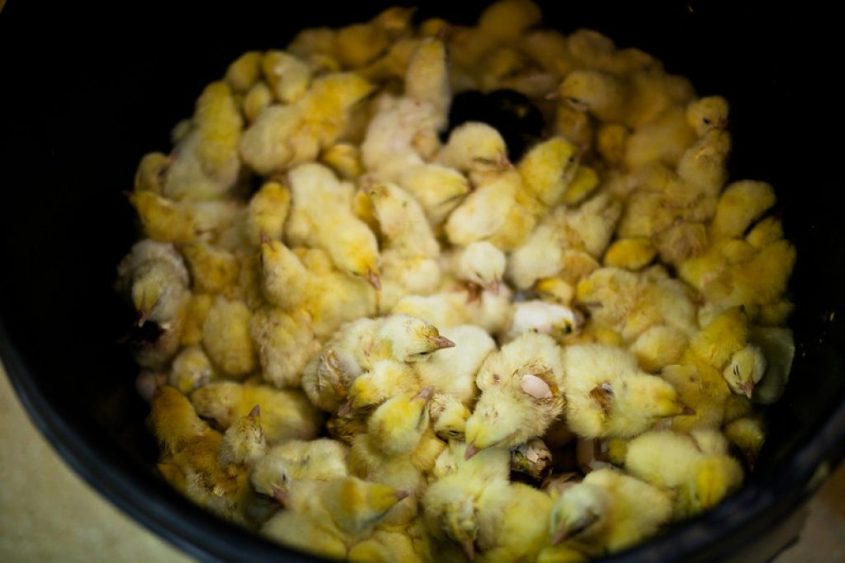 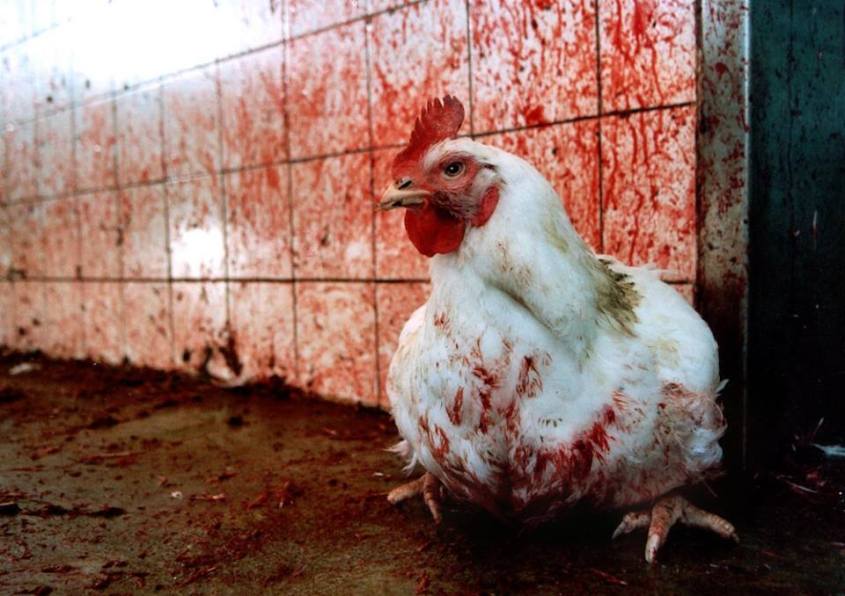 As so-called laying hens, they are used for the production of eggs. With a laying performance of around 300 eggs per year, they have to achieve completely unnatural high performance.

Therefore, the most effective way to reduce the suffering of all chicks is by eating a plant.

We can all make a conscious decision against animal agony and remove eggs from our menu. Try it!

the petition from Italy: https://campaigns.animalequality.it/stop-strage-pulcini/

the petition from Spain: https://igualdadanimal.org/actua/pollitos-triturados

the petition from Germany: https://animalequality.de/kampagnen/horror-ei

And I mean…The walls have long been made of glass. An enormous number of undercover investigations have created this transparency, which is even broadcast by the public media.
But meat consumption is increasing.
Worldwide meat consumption has quintupled in the past 50 years.

Germany produces 8 million tons of meat every year!
While in the Third World and according to UN statistics, 43,000 children die of hunger every day. Per day!
Why?
Because the West feeds its “useful” animals with the grain.

All of this is already known, and at some level, we know the truth.
But as soon as we recognize this reality and recognize our meat consumption as the main cause of animal suffering and the climate catastrophe, we have to take responsibility and radically change our actions.
But that’s exactly what we don’t want to do.

In this sense, this fascist system of the meat and milk mafia has done an excellent indoctrination work and made 7 billion human specimens its collaborators. 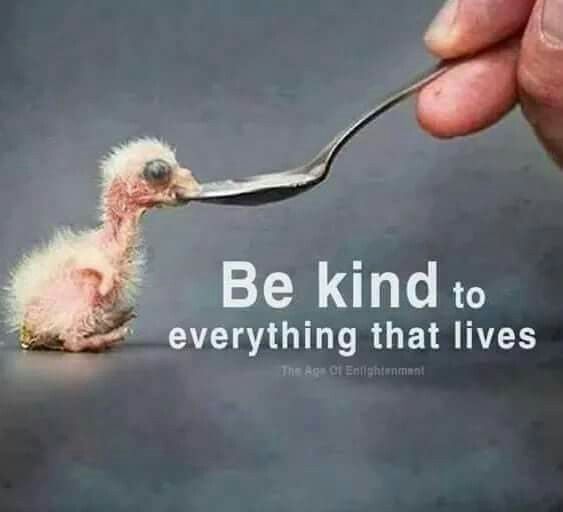 In quarantine I think; are they just beautiful !!

A breaking PETA undercover investigation into a typical American egg farm that supplies eggs to Walmart—which sells them under its “Great Value” brand—reveals that more than 100,000 hens were yanked out of their cages and crudely gassed.

Workers tried but failed to break other hens’ necks—causing them a prolonged, agonizing death.

Hundreds more hens suffered and died in their cages. PETA’s investigator found that many of them were simply left to decay. The surviving hens were crowded together with these rotting corpses for days on end.

Hens had no place to stand, sit, or lie down except on the wire flooring of their cages, which dug into their feet.

You can make a tremendous difference today for the millions of intelligent, gentle hens who are suffering so severely right now at this Walmart supplier’s farm.

We can bring these and billions of other hens closer to a day free of unrelenting stress, fear, misery, and agony. Please, take a minute to lend your powerful voice in defense of these animals.

Thank you for all that you do for animals.

Mark (WAV) and Richard (Rich) worked together on live animal transport issues a long time ago; and they were good friends for years – Richard is one smashing bloke and a true friend of the animals !.  You can see a photo here taken by Mark of Richard (on the right) at the EU HQ in Brussels during a protest against live transport organised, what 20-25 years ago.

Mark remembers; the last time Rich and I met up was at Dover docks here in Kent, England.  Of all times and places;  it was about 0300 hrs and I was at the harbour myself doing live calf and sheep export work; as many UK calves were heading to the Netherlands for crating; which is a terr8ible process. .   He had arrived at the port to catch a ferry across the (English) Channel to do some work in Belgium I think it was.  We came across each other and had a quick chat about export issues and other things before we shook hands and he departed into the darkness to catch the ferry.  I remained at the docks for loaded transporters to arrive; again to catch the ferry.  Sad work, but when you meet people like him; it kind of gets better – Mark.

As you can see below – there are a lot of trucks to keep an eye on.  Fortunately; Dover is not used now for animal exports – it was a major victory for us to stop it.

Here you can see a crated calf ; that’s why we fight for them:

Great to see Richard is now doing work for the team at Viva ! – and we wish him every success  !.

A young Richard is on the right in this photo by Mark.

Centre is another great friend and animal campaigner; John C; whop sadly passed a short while back.  You can read our tribute to John here:

Relying on a hidden camera, a bluff and a little bit of luck, award-winning investigative journalist Rich Hardy finds imaginative ways to meet the people and industries responsible for the lives and deaths of billions of animals used to feed, clothe and entertain us.

Listen in to this month’s podcast to hear more about his journey and click below to purchase a copy of new book, Not As Nature Intended, direct from the Viva! Shop.

The new book by Richard –  https://vivashop.org.uk/collections/books/products/not-as-nature-intended?mc_cid=aac989c91f&mc_eid=26c03356b8

Undercover investigator has exposed some of the most heinous examples of animal abuse around the world for nearly 20 years.

Rich’s pictures and video footage from inside places such as abattoirs, factories, circuses and livestock markets have been used worldwide by more than 20 international animal protection charities, helping to launch campaigns, change laws and inspire people to take action for animals.

He has documented animal suffering in 28 countries, providing organisations with key evidence to push for new welfare laws, pursue animal cruelty prosecutions or raise public awareness about the need to treat animals with kindness and respect.

His many assignments have included infiltrating fur trappers in the USA and monkey breeding farms in Asia, as well as undercover investigations into the meat industry, live exports, ritual slaughter of sheep in Singapore, and the horrific battery farming of rabbits for use in pet food sold in Britain.

Although his work has been widely featured in campaigns and news outlets, he has always remained anonymous to allow him to continue working undercover. His identity can now be revealed as he is giving up undercover work to focus on activism and campaigning.

Now working with the Veganuary campaign, he also runs a micro-sanctuary for dogs, cats, chickens and ducks he and his partner have rescued from shelters and factory farms.

BREAKING: We did it! Wild animal circuses will be banned in Wales

I am delighted to share the great news with you that as of 1st December 2020,

wild animal ciruses will be BANNED in Wales!

Yesterday the Welsh Senedd UNANIMOUSLY voted the new bill into law, which will make the use of wild animals in circuses illegal from 1st December 2020.

This now means that from December these cruel circuses will be banned across Britain, with bans already in place in Scotland and England.

This victory has been a long time coming, with dedicated activists like you fighting for a ban for years. And it has taken a mix of campaigning tactics to achieve – from protest on the ground outside circuses, to lobbying lawmakers to support this ban. 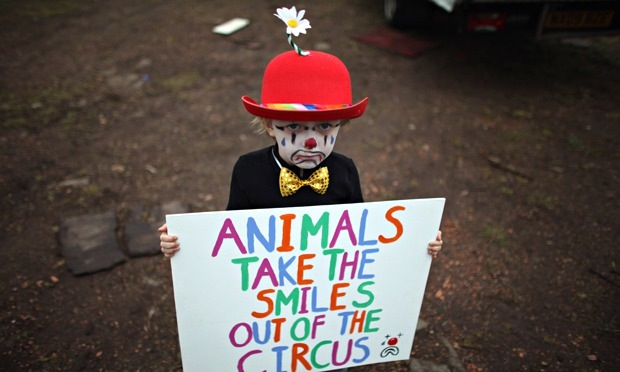 Of course we still have work to do, as not all animals will be covered by this ban. Sadly ‘domestic’ animals were excluded from the bill despite the fact that they too suffer for entertainment. But we can take this victory today and use it to fuel our efforts for these animals too – until all are free!

For now, please go and celebrate this fantastic news, and come back tomorrow ready to campaign once more.

Thank you so much again for your efforts in this fight. You have made history for animals!

P.S. Thank you for all your efforts in this long fought campaign.

What a fantastic victory for animals!