THE DETAILS: Animal Equality investigated several chicken farms and meat markets from February 2019 to October 2020 in Maharashtra, Gujarat, Andhra Pradesh, and Telangana—states in India which are known for their chicken production.

What we found was shocking.

In India, It’s standard practice to give feed laden with antibiotics to grow the bodies of chickens unnaturally fast. As a result, their legs become crippled because of the unnatural weight gain. In our investigation, we found birds who could not walk or reach food or water.

We also found many chickens severely ill and dying of starvation, heart attacks, and respiratory infections. The carcasses of the dead birds were left to rot next to live chickens.

THE HORRORS OF PRODUCTION: Once these chickens reach their maximum weight, they’re crammed into overcrowded transport trucks. The birds are then sent on a rigorous journey that lasts for hours, sometimes days, without food or water. Many will die along the way, while those that remain are barely alive.

At the meat markets, the chickens are crammed into small cages for hours—often days—again without food or water.

Many chickens waiting for slaughter develop various infections and diseases, and aside from the absence of veterinary care, there is no health inspection conducted on the birds who will soon become food.

When the chickens are slaughtered, their throats are slit and they are thrown into drain bins where they languish in pain for several minutes before they die. The meat from these poor birds is then prepared in filthy, unhygienic conditions. 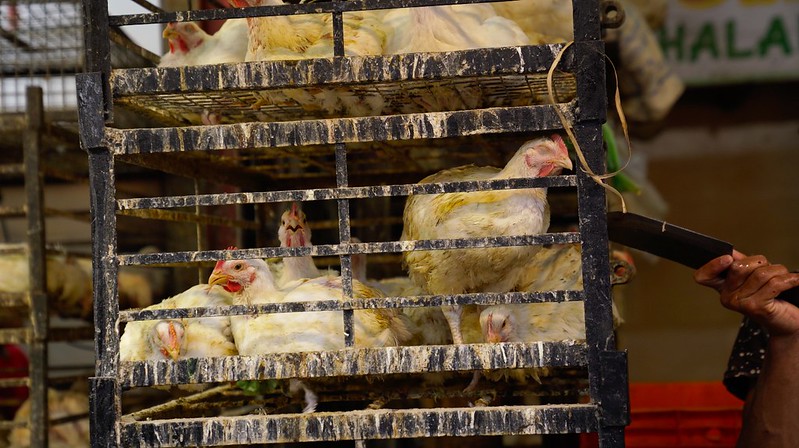 PAST WORK IN INDIA: This is Animal Equality’s second investigation into Indian chicken farms. After exposing the cruel and illegal practices on these farms in 2017, we presented our findings to the Indian government, along with a list of recommendations to reduce the suffering of chickens. Some of these recommendations are included in the Law Commission’s proposed rules for the welfare of chickens.

WHAT WE’RE DOING NEXT: Animal Equality has also requested the Indian government to:

Stop the slaughter of chickens at meat shops, markets, etc., and implement the slaughter provisions in the country’s Food Safety and Standards regulations, as well as those in India’s Prevention of Cruelty to Animals rules.
Introduce in-Ovo sex determination technology to avoid the killing of male chicks.
Form a central committee to monitor the welfare of farmed animals and appoint a subcommittee at every district and regional level. 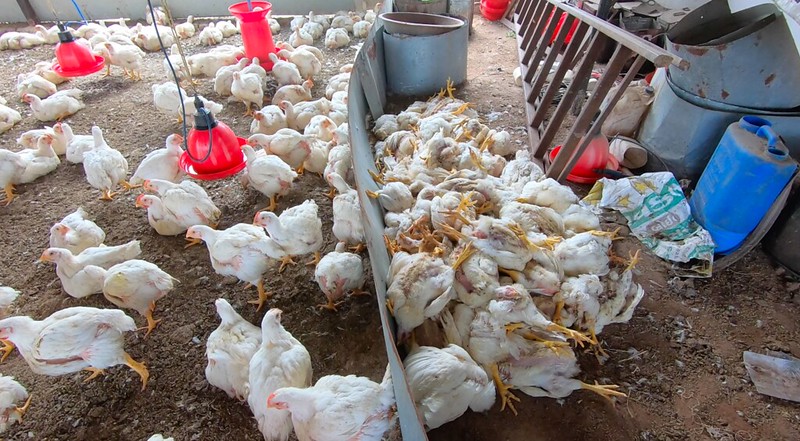 WHAT YOU CAN DO: No matter what country we are in, our investigations have shown that chickens are suffering by the hundreds of millions on farms and in slaughterhouses all over the world. Their pain and exploitation are seemingly neverending and it is up to people like you—people who care about the welfare of all animals—to stand up and use your voice and purchasing power to change the future for the abused birds.

Please, share our investigations with your networks, and if you haven’t already, make the switch to plant-based. Together, we can create a society where all animals are respected and protected.

Comparison to German practices…About 50,000,000 laying hens live in Germany! That’s quite a lot, considering that there are around 83,000,000 inhabitants.
In Germany, 97 percent of the chickens live in conventional barn farming.
Nowadays, facilities with over 200,000 animals are no longer uncommon.

Battery packs have been banned in Germany for several years. As a result, the meat industry came up with “small group farming”.

These are also cages, but this time larger ones, in which up to 60 hens are crammed. For the hens also cruelty, each chicken has the area of ​​a 3/4 A-4 page available. Just that the chicken has room to lie down.
Apart from eating and laying eggs, a chicken cannot do any of the things it would like to do.

Until the time of slaughter, the chest and thigh muscles are enormously enlarged and together makeup to 66% of the body weight.

The focus of the breeding of high-performance broilers is a high amount of meat, efficient feed conversion, and the shortest possible fattening time due to large daily weight gains
Today’s mast hybrids reach this weight within 30 days or less.

The video was shot on an organic farm in Germany.
But you can see a lot of similarities to the video from India, except for the open cruel slaughter on the street and the transports.
India is known for having the worst animal transports, and not just related to poultry.

Nevertheless! No farm cruelty is justified just because there are worse ones elsewhere.
We don’t compete in cruelty.
We fight for these practices to be abolished no matter where in the world.