A calf that jumped onto the road from an animal transporter caused a stir on the German autobahn on December 9th. The highway had to be closed for around two hours, the police reported in a press release.

Several road users reported the unusual pedestrian to the police at around 5:30 p.m. The animal was seen shortly after the Magdeburg-Center junction on the road towards Hanover.

According to the first findings of the police, the lower part of the loading flap of an animal transporter opened during the journey and the calf jumped onto the road.

According to the officials, the following vehicles were able to evade in time so that there was no traffic accident. It is still unclear whether there was a technical defect on the loading flap.

We humans will also die at some point, but nobody has the right to shoot us because of it if they want to.

The calf has been denied the right to a chance in life just because we, human animals, take the right to act with one and the same fascist principle, namely: to decide about the life of other animals when and how it suits us.

That’s what this is about!

🐂 Do you know what the ensogado bull consists of?

It is the popular form of bullfighting celebration consisting of the release in a locality of a bovine cattle with one or more ropes tied to its head to control its movements and attacks.

The rope bull is probably the most atavistic spectacle and also the most distressing for the animal, as it is the one that limits its movements the most and for the longest time.

Suffering is accentuated in this type of celebration due to the great physical fatigue that they accumulate, as they are taken to the limits of their aerobic capacity.

In all the celebrations you can see how, shortly after starting, the horns resort to abdominal breathing with their mouths open, their tongues sticking out and profuse salivation.

And I mean…How primitive and anti-social can people in the middle of Europe be?
It is a shame for the country that some dull, mentally weak proletarians still uphold this primitive tradition and get excited about something that ordinary people only disgust.

If torture, mistreatment and exploitation of innocent, defenseless beings is a culture for Spaniards, why don’t they burn witches anymore?
Wasn’t that a sad culture in Spain?
That would be good business.

They’re designed to be anonymous.

Tucked away in unassuming facilities in quiet communities such as Chatfield, Minnesota; Ewing, Illinois; New Sharon, Iowa; and Oxford, Michigan, not even their names—Moulton Chinchilla Ranch, Oak Hill Genetics, Ruby Fur Farm, and Oakwood Research Facility—betray the nature of their operations.

But Moulton Chinchilla, Oak Hill, Ruby Fur, Oakwood, and numerous others around the country form a vast, largely unknown network of businesses that breed and supply dogs, chinchillas, foxes, ferrets, pigs, rabbits, and other animals for experimentation laboratories.

They peddle in misery.
Suffering is their currency. 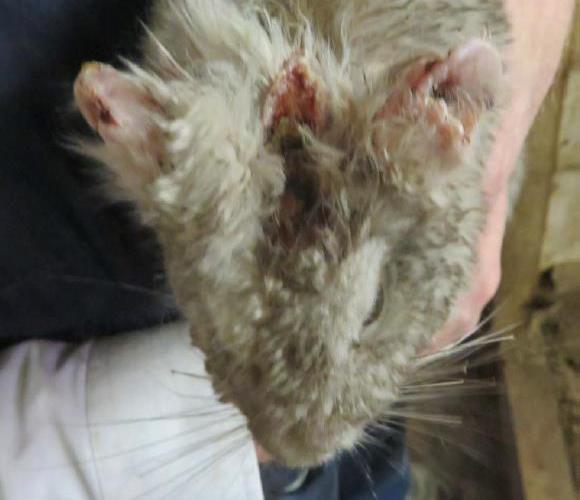 The large, open wound on this chinchilla’s head went untreated.

PETA has obtained video footage and photographs taken by federal inspectors that for the first time show the unsanitary, often putrid, and abhorrent conditions of these decrepit facilities that breed, warehouse, and sell sentient beings for profit.
The footage—along with federal inspection reports—shows definitively that suffering for animals destined for experimentation begins well before they arrive at the laboratories.

Moulton Chinchilla Ranch is located in Chatfield, Minnesota, a quiet town with a population of fewer than 3,000, located outside Rochester.

Moulton is a hellhole so wretched that in November 2018, the U.S. Department of Agriculture (USDA) took the rare step of filing a formal complaint against the company for its serious and chronic violations of the federal Animal Welfare Act (AWA). 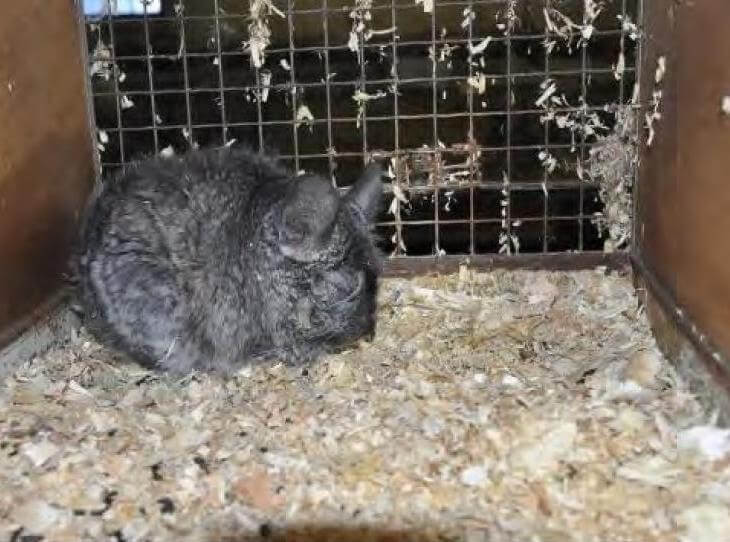 Federal inspectors found chinchillas with open, untreated wounds as well as collars that were embedded into their necks. When they were removed, inspectors said that “the skin was eroded, there were matted hair and open lesions” and “a putrid odor was noticeable” [emphasis added].

One baby chinchilla found outside his enclosure was placed with a foster mother. It was later noticed that the animal had “a deep fresh wound on [his] back left leg … [and] some toes just hanging on” [emphasis added].

Following the collar’s removal, the inspector observed “an open sore around most of the neck where the collar had been,” seeping discharge with “a strong putrid odor.” The USDA has repeatedly cited Moulton Chinchilla ranch (MCR) for open sores and abscesses that have developed under the collars. It did so again this year.

One baby chinchilla found outside his enclosure was placed with a foster mother. It was later noticed that the animal had “a deep fresh wound on [his] back left leg … [and] some toes just hanging on”

END_OF_DOCUMENT_TOKEN_TO_BE_REPLACED

Pakistan – Suzie and Bubloo’s nightmare is over: Bears who were the last remaining animals at hellish Pakistani zoo follow Kaavan ‘the world’s loneliest elephant’ to a new life elsewhere

Read the full story, with pictures at:

A new study reports a growth in the popularity of plant-based diets in The Czech Republic, with people wanting to improve their health and help the planet.

A study has found an increase in the popularity of switching to plant-based diets in the Czech Republic, in line with a rise across Europe.

Whilst the research found a growing will to reduce meat consumption amongst younger age groups, it was also found that Czech people are not primarily ‘pro-plant-based’.

Of consumers asked, 20 percent said they expected to reduce their meat intake in the future – and the main factor was to improve their health.

The market study was conducted by the Agricultural Economics Society (AES).AES claims the increase in popularity is not just consumer-led, and that large retail chains are developing their own plant-based product ranges.

Earlier this month, research from the vegan and vegetarian food app HappyCow saw the Czech Republic fair in the top three for having the most vegetarian-friendly restaurants per population size in Europe.

Expats.Cz claims there has been a surge in the country’s restaurants favoring meatless menus over the past four years.

More vegan food has become readily available across Europe in recent years, from Burger King’s expansion to the Beyond Meat production facility which opened in the Netherlands this year.

Statistics from The Vegan Society show a skyrocket in vegan food and drink businesses across Europe between 2016 and 2019.

Plant-Based Diets On The Rise In The Czech Republic – Study Finds (plantbasednews.org)