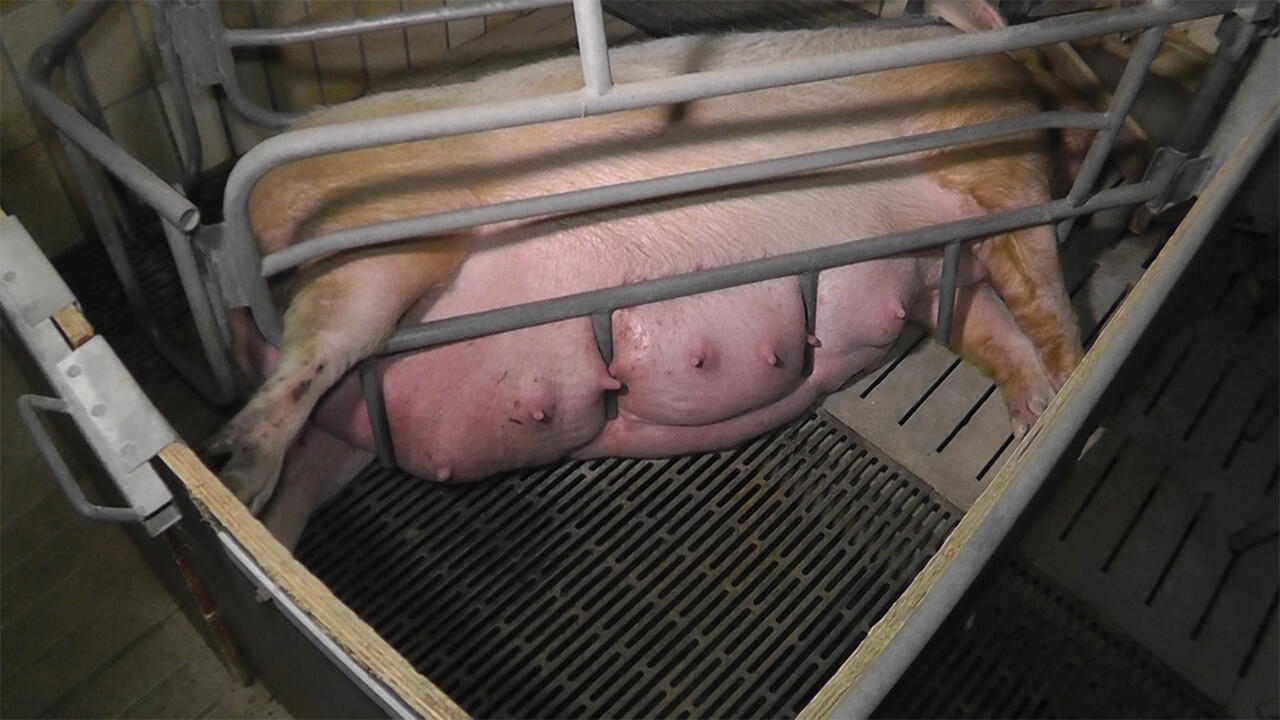 “The pig must be freed and the abuser sent immediately to a closed facility, where ideally he should be kept in such a metal frame to encourage compassion for his victims.

With good behavior, i.e. without annoying whining and complaining, he can return to his home stable after 6 months and continue to amortize the mother sow’s frame with his forced lying in it.

After a further 6 months, he can be released back into the wild with lifelong animal husbandry and hunting ban”.

We agree!
This is the only way to free psychopaths, animal abusers, and animal exploiters from their perverse inclinations

Millions of fox, mink, raccoon dogs, and chinchillas spend their entire lives trapped in tiny wire cages before being killed and skinned for so-called fashion.

Not only do these battery cage systems cause immense animal suffering, but they are also now proven to present a serious public health risk.

The cramped conditions, poor hygiene, stress, injuries and disease, minimal veterinary care, and lack of genetic diversity all mean that fur farms create ideal conditions for viruses to be transmitted.

Twenty countries have already acted to ban the farming of animals.

In light of new evidence that fur farms can also act as reservoirs for deadly viruses, as well as create new viruses, we call on all countries to ban fur farms.

Sign now to end the cruel and deadly fur trade before it causes the next pandemic!

This petition is part of a global campaign initiated by “Fur Free Alliance”.

And I mean…Every year more than 700,000,000 animals are slaughtered for their meat. In Germany.

Wasn’t it a matter of time before it took its revenge?

Because we humans don’t care about animals anyway (otherwise we wouldn’t lock them up in wire cages for an expendable fashion accessory and slaughter them), we come straight to the explosive part of the story: the mink variant of the virus is apparently against Covid-19 antibodies more resistant in the human body, which means that it could spread among people who are already immune or vaccinated.
In other words, and in this case: the previous efforts to produce a vaccine would have been in vain.

The WHO warns of excessive concern, but the Danish government recognized the risk immediately and has shut down the industry completely and in these days had all 17 million minks in Denmark culled immediately.

Since the beginning of the pandemic, we have been looking down on the Chinese and their virus-contaminated “wet markets”, where domestic and exotic animals are traded live and slaughtered on site –
“Something uncivilized!” we say- and wonder why the Chinese government did not regulate these hygienic death zones a long time ago.

In the meantime, we continue to shred or gas male chicks (40 million in Germany alone), buy cheap pork, even though we know what happens to the piglets and how their mothers are suffering, and we ignore the mass murder of pigs because of swine flu.

Even if the particularly gruesome pictures come from the fur farms in China, the photos from the fur farms here, in Europe, are also a horror.
Practically, all farms look the same, no matter which country they are in. All show the same bleak, cruel picture that allows only one conclusion: fur is suffering, pain, and contradicts any moral progress in our society, and therefore it has to be prohibited!

In the future no lockdowns will help, only a new morality based on the liberation of animals from their slavery

Thanks to Stacey at ‘Our Compass’ for supplying this info.

There are lots of terrible photos on this link; so it is best you are directed there rather than we download all the photos and text.

Please remember that all animals exploited for human use suffer, no matter the country; animal suffering is not limited to certain locations or areas, an animal whose body is used, manipulated, taken from, and violently killed, is an animal who is abused, no matter the conditions endured prior to vicious, terrifying slaughter, but that 99% of all animals in the United States, and >90% globally, are “produced” in extremely confined, CAFO/Factory Farm conditions. The ONLY humane is vegan. SL

WAV Comment: We have covered this news recently; but here is the official from the BBC network.

A Belgian ban on kosher and halal slaughter of animals without being stunned has been backed by the European Court of Justice, which rejected objections by religious groups.

The EU’s highest court backed a Flemish decision to require the use of stunning for livestock on animal rights grounds.

The animal is not killed in the stunning process.

The head of the conference of European rabbis said the ruling would be felt by Jewish communities across Europe.

“This decision goes even further than expected and flies in the face of recent statements from the European institutions that Jewish life is to be treasured and respected,” said Chief Rabbi Pinchas Goldschmidt.

The ruling came as a surprise as it went contrary to a recommendation in September to quash the Flemish law by the Court’s Advocate General, who said stricter animal welfare rules were allowed if the “core” religious practice was not encroached upon.Under the requirements of Muslim halal slaughter or Jewish shechita, an animal’s throat is slit quickly with a surgically sharp knife while it is still conscious.

EU law, along with UK law, already requires animals to be stunned before being killed, unless the meat is intended for Muslims or Jews, and then only in approved abbatoirs.

What did the Court rule?

The European Court said all member states had to reconcile both animal welfare and freedom of religion and EU law did not prevent countries from requiring the stunning of animals as long as they respected fundamental rights.

While the Court accepted that imposing such a requirement limited the rights of Muslims and Jews, it did not ban ritual slaughter and the Belgian law’s “interference with the freedom to manifest religion” met an “objective of general interest recognised by the European Union, namely the promotion of animal welfare”.

It also said the Flemish parliament had relied on scientific evidence indicating that prior stunning was the best way of reducing an animal’s suffering and that the law allowed “a fair balance to be struck” between animal welfare and freedom of religion.

Muslim groups repeatedly challenged the Flemish legislation before it was passed and came into force in January 2019. The French-speaking Wallonia area of southern Belgium adopted the law months later.

When the Belgian laws came in, Muslim and Jewish groups feared they were being used by nationalists to whip up anti-immigrant sentiment.

The head of the European Jewish Association, Rabbi Menachem Margolin, said Friday was a “sad day for European Jewry” and Belgium’s Jewish umbrella group, CCOJB, said it would take its legal fight to the European Court of Human Rights.

Denmark is set to dig up millions of mink that were culled because of a mutated form of coronavirus.

About four million mink will be exhumed from mass graves and incinerated to prevent pollution, the government said.

It is set to happen in May, when officials say the risk of coronavirus contamination from the dead animals will have passed.

More than 15 million mink have been culled in Denmark, devastating its fur industry – the largest in the EU.

Some of the mink buried in mass graves in a military area in the west of the country have resurfaced because of the nitrogen and phosphorus gases produced by their decay.

The two burial sites are highly controversial, as one is near a bathing lake and the other not far from a source of drinking water. Residents have complained about the potential risk of contamination.

The ministry of food and agriculture said in a statement on Sunday that the government had gained support in parliament to dig up the mink next year.

“Once the mink are no longer contaminated with Covid-19, they will be transported to an incineration facility, where they’ll be burned as commercial waste,” the ministry said.

Denmark announced early last month that it would cull all of its mink after a mutated form of coronavirus was found on mink farms. There were concerns that the mutated variant could threaten the effectiveness of future vaccines.

The government later admitted that the cull was mishandled.

Covid: Denmark to dig up millions of mink culled over virus – BBC News

The Valletta government is coming under increasing pressure for its hunting-friendly policies.
On December 3rd, the European Commission initiated three proceedings against the island nation for violations of the European Birds Directive.
Specifically, it is about the opening of the spring hunt for quail, which is banned in all other EU countries, as well as the catching of golden plovers, thrushes, and finches with large folding nets.

The photo shows a shot quail-Malta

According to the Commission, Malta has failed to ensure adequate police controls, which has led to a massive increase in poaching.
The committee had documented hundreds of cases of abuse in recent years and informed the European Commission about the situation in Malta.
If convicted by the European Court of Justice, Malta faces fines running into the millions.

a linnet as a decoy-Malta

This news is invaluable – it is not only a signal to the Maltese government but also to other EU countries that may also be planning such hunting permits.

And I mean...Amazing!
The violation that is now being brought to court has only taken place since the end of October 2020.
In this case, the EU brought a lawsuit in barely more than a month – that’s really great!

The process will of course take a while, but the start was sensationally quick.

If Malta is forced to withdraw these three permits, thousands of hunters will reluctantly comply with the new laws.
Of course, there will always be some criminals idiots who do not adhere to any regulations and will try to trick.
The committees’ fight against bird murder continues, however, and these poachers will hopefully be brought to justice too!