Some of the thousands of mink culled to minimize the risk of them re-transmitting the new coronavirus to humans have risen from their shallow graves in western Denmark after gases built up inside the bodies, Danish authorities said Thursday.

“The gases cause the animals to expand and in the worst cases, the mink get pushed out of the ground,” Jannike Elmegaard of the Danish Veterinary and Food Administration said. He said it affected “a few hundred” animals.

The mink are buried in trenches that are 2.5 metres (8.25 feet) deep and 3 metres (10 feet) wide. A first layer of about 1 metre of dead mink are then covered with chalk before another layer of animals is laid, covered again with chalk and then with dirt, Elmegaard told The Associated Press.

But because the soil where they are buried is sandy, some have re-emerged. “We assume it is the mink that were in the upper layer that pop up,” he added calling it “a natural process.”

“Had the earth been more clayish, then it would have been heavier and the mink would not have resurfaced,” he told the AP. The animals who resurface are reburied elsewhere, and authorities guard the site to keep away foxes and birds.

Denmark culled thousands of mink in the northern part of the country after 11 people were sickened by a mutated version of the coronavirus that had been observed among the animals.

Earlier this month, the Social Democratic minority government got a majority in parliament to back its decision to cull all of Denmark’s roughly 15 million mink, including healthy ones outside the northern part of the country where infections have been found. The proposed law also bans mink farming until the end of 2021.

The government had announced the cull despite not having the right to order the killing of healthy animals, an embarrassing misstep that caused it to scramble to build political consensus for a new law.

The coronavirus evolves constantly as it replicates but, to date, none of the identified mutations has changed anything about COVID-19’s transmissibility or lethality.

Culled minks with COVID-19 mutation rise from their graves in Denmark – National | Globalnews.ca

Click here to see all of our past WAV posts on the Danish Mink cull:

A series of newly-published studies based on a National Geographic expedition to Mount Everest in 2019 provides a shocking picture of how human activity is impacting the highest point from sea level on Earth.

One of the studies even found microplastics just below the summit, at 8,440 meters (approximately 27,690 feet). 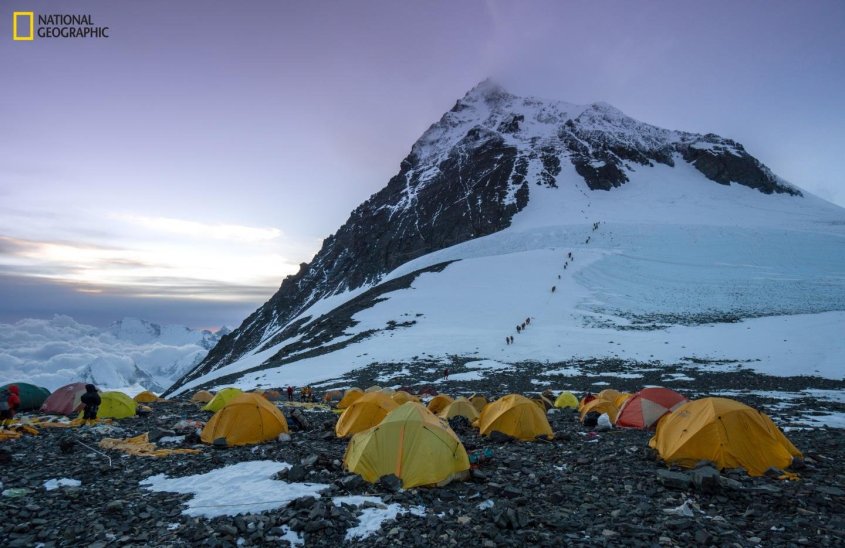 „Mt. Everest is somewhere I have always considered remote and pristine,“ University of Plymouth scientist and National Geographic Explorer Dr. Imogen Napper, who was the lead author on the plastics study, told EcoWatch in an email.
„To know we are polluting near the top of the tallest mountain on earth is a real eye-opener – we need to protect and care for our planet.“

Microplastics at the Top of the World

Napper’s study, published in the journal One Earth Friday, found microplastics in every snow sample taken from Mount Everest. The findings join a growing body of research showing the extent of microplastic pollution in even the most remote corners of the planet.

There has been growing awareness in recent years of the buildup of trash on Mount Everest left behind by tourists and climbers.

In 2019, the Tibet Autonomous Region Sports Bureau said it removed 9.3 tons of waste, and China closed its Everest base camp to tourists to prevent more pollution.

Some media outlets have even begun to refer to the mountain as the „world’s highest garbage dump.“

However, Napper’s study is the first to focus on the accumulation of microplastics on the mountain specifically. Microplastics are plastics less than five millimeters in length that typically slough off of larger plastics as they degrade. Their small size means they are easily ingested by animals by mistake and are also extremely difficult to clean up.

Napper’s team found more microplastics collected near the base camp, where climbers tend to congregate.

But they still found five microfibers at the mountain’s „balcony,“ the highest point they studied. Those fibers numbered one clear acrylic fiber, one red polyester fiber, and three blue polyester fibers.

In general, many of the microplastics found on Everest were fibers that could have been brought by climbers.

END_OF_DOCUMENT_TOKEN_TO_BE_REPLACED

Grubhub Orders For Meat Alternatives Have Skyrocketed 463% In 2020

Grubhub Orders For Meat Alternatives Have Skyrocketed 463% In 2020 (plantbasednews.org)

Orders for meat alternatives have skyrocketed by 463 percent in 2020, according to Grubhub.

The figures come from the American delivery site’s annual Year In Food report, which ‘details the top trends of 2020’.

It also found that popularity for vegan-friendly products spiked by 13 percent, a slower increase than the year before where they were up by 27 percent.

New York was listed as the most vegan-friendly state, followed by California, Oregon, Massachusetts, and Illinois.

In the UK, vegan delivery orders have also skyrocketed over the last year.

Deliveroo recently announced its plant-based orders had spiked a staggering 115 percent from 2019 to 2020.

In a statement sent to Plant Based News, commercial manager and vegan category lead at Deliveroo Elena Devis said: “It’s fantastic to see that Deliveroo customers are embracing the growing choices of vegan dishes available on the platform.

“Year on year we’ve seen huge growth in demand for plant-based food. And it is our goal as a company to be the go-to platform for healthy and vegan options.”

Health officials have declared a COVID-19 outbreak at a mink farm in B.C.’s Fraser Valley.

In a media release Sunday night, Fraser Health said eight people at the farm had tested positive, and that it was screening employees and contact tracing.

READ MORE: Culled minks with COVID-19 mutation rise from their graves in Denmark

Affected staff were self-isolating, it said.

The health authority did not identify the community or the farm.

A spokesperson for the health authority said “the information bulletin is all we have to share at this time,” when asked for more specific information.

The farm has been ordered to stop transporting animals, products and goods from the farm under the BC Animal Health Act, Fraser Health added.

WorkSafeBC is contacting other mink farms to discuss requirements under their COVID-19 safety plans, it said.

“Our lives begin to end the day we become silent about things that matter.”😿-Martin Luther King, Jr.

These animals suffer some of the worst cruelty inflicted by humans. Because they’re female.

To animal industries, the ability to have babies is a valuable commodity. As a result, mothers of many species suffer physical and psychological stress that few of us can imagine.

Watch all the video footage at:

These animals suffer some of the worst cruelty inflicted by humans. Because they’re female. | Animals Australia