The police in Cyprus put one of the most notorious poaching gangs on the island to a halt in November.

Equipped with house search warrants, they found three people with a total of five nets and 366 dead protected songbirds – mostly warblers.
The total fine for the criminal bird catcher known for many years is € 11,660.

It was the biggest blow to organized poaching in Cyprus in years. The police action was preceded by months of research by the Committee against Bird Murder and its partner BirdLife Cyprus, which led to the submission of numerous pieces of evidence.

We are very happy about this successful action against a gang that up to now seemed “untouchable” and despite numerous previous reports, was always able to avoid punishment.

One of the comments was the question that would also be mine: “How will we know if they really pay the fine”?

And the answer from the committee: “They will because it´s an administrative fine, they can’t refuse”.

One really must have a sick personality construct to catch the most harmless of the animals, to kill them, and to be proud of it.

Mink were pulled from cages by their tails or hind legs and hurled into mobile gas chambers on fur farms in the Netherlands, video footage has revealed. The rough handling of the animals breaks EU animal-welfare regulations.

Animal rights campaigners said the video shows a behind-the-scenes view of the cruelty of the Dutch industry, which is closing next year. It also highlights the need for the UK to stop sales of real fur, they added.

The footage, secretly shot on two farms last week by Dutch group Animal Rights, shows the animals being pulled roughly from cages and thrown one after the other towards mobile gas chambers, sometimes from a great distance.

In one clip, the mink are heard screeching with alarm or pain.

And workers are seen with their anti-coronavirus masks below their noses.

Claire Bass, executive director of Humane Society International/UK said: “Live mink are seen being yanked from their cage by the tail or hind leg, in clear breach of EU regulations, and tossed like trash into the mobile gas chamber one after the other in quick succession.

The speed with which these sentient animals are thrown in together means they will almost certainly be dying in front of each other, again in breach of the rules.”

Vegan kebab joint What The Pitta has announced it is opening a fifth store in the U.K.

The award-winning eatery will open its ‘biggest site yet’ in Manchester at the beginning of next year.

‘Fills us with optimism’

Cem Yildiz is the co-founder of What The Pitta. He said the expansion feels like a ‘huge step forward’ for the company.

According to Bdaily News, Yildiz said: “The site will be our biggest brick and mortar site yet… To finally open during what we hope is the tail end of this pandemic fills us with optimism for the future. Not just us, but hospitality as a whole.

“Manchester is my favourite city outside of London, with such an incredible food scene. We can’t wait to be a part of that. [We] hope the city welcomes us with open arms ready for their vegan kebabs.”

Earlier this year, What The Pitta picked up the prize for Best Takeaway in London at the British Kebab Awards.

The awards, which are held each year, were founded in 2013. Moreover, they are sponsored by Just Eat and ‘seek to celebrate kebab restaurants across the U.K’.

Yildiz told Plant Based News: “To win at the kebab awards is a huge statement for veganism…

“We were laughed at when we decided to create London’s first exclusively vegan kebab shop just over three years ago… Now, we’ve taken centre stage with our vegan spin on the British classic kebab.”

The dairy industry: Where cruelty is standard practice

From a young age, I loved animals. That’s why I became a vegetarian, and for so long, I thought I was doing all I could to help animals. It didn’t occur to me that cows suffered in the dairy industry. I was wrong. Dairy cows suffer horrendously. And they desperately need our help.

My name is Erin, and as an undercover investigator for Animal Outlook, I have seen firsthand how terribly dairy cows suffer. Before I went undercover at an industrial dairy farm, I did all I could to prepare myself. I watched footage from previous investigations and spoke with a former investigator. I went vegan when it became clear that cows on dairy farms lead a tragic existence. Nothing could prepare me for the shocking reality I faced when I wore a hidden camera, working behind the closed doors of the dairy industry.

Earlier this month, we released my latest — and last — heart-wrenching hidden camera video, filmed inside Dick Van Dam dairy in California. This experience confirmed what I had already come to realize: cruelty is standard practice in the dairy industry. I saw abuse and neglect every single day I was there, including some of the most egregious cruelties I’ve seen in my career, from newborn calves left to languish and die to workers lifting sick or injured “downed” cows with a tractor and dragging them with a metal “hip clamp.

The dairy industry: Where cruelty is standard practice | by Animal Outlook | Nov, 2020 | Medium

After PETA published an undercover disclosure about the alpaca industry at the end of May, Tchibo, Columbia Sportswear, and the Ascena Retail Group have now announced, after talks with PETA and their international partner organizations, that they will discontinue the animal quality product.

Workers smashed the animals, some of them pregnant, onto tables and fixed them in devices that looked like the Middle Ages – pulling them so hard that their legs almost dislocated.

“We are very pleased that Tchibo has decided this year not to use alpaca wool in the future. Many alpacas are spared the agony of wool production and slaughter, ” says Frank Schmidt, Head of Corporate Affairs at PETA Germany.
“We appeal to all fashion and textile companies to follow this groundbreaking example and, for the sake of animals and the environment, to discontinue alpaca wool and to switch to vegan, sustainable fibers.” 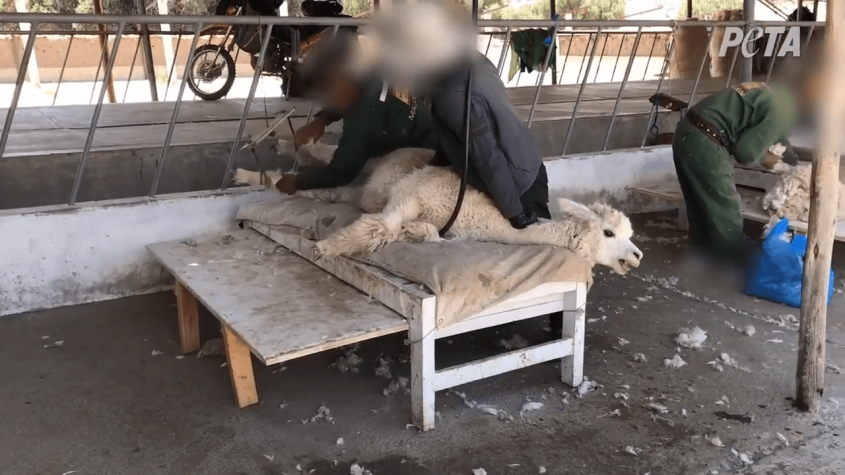 The Ascena Retail Group will no longer use alpaca wool from the winter season of 2021.
Columbia Sportswear also announced in October after talks with PETA USA that it would no longer buy alpaca wool.

The fashion giants Uniqlo, Esprit, Tom Tailor, Valentino, and Marks & Spencer had previously decided to phase out the use of the material.

Gap Inc and the H&M Group with its eight brands have also already broken off all business relationships with Mallkini’s parent company – the Michell Group.
PETA points out that the production of alpaca wool causes extreme animal suffering and is also harmful to the environment.

In the “Higg Materials Sustainability Index”, alpaca wool is the second most harmful material for the environment, just behind the silk.

PETA’s motto is in part: Animals are not there to be attracted to them or to be exploited in any other way. The organization works against speciesism – a worldview that classifies humans as superior to all other living beings.

And I mean…Do you remember our report on the cruel production of alpaca in Mallkini, the world’s largest privately-owned alpaca farm, near Muñani, Peru?
https://worldanimalsvoice.com/2020/06/02/alpaca-fleece-of-the-gods-with-the-torture-of-animals/
The same video showed the horror conditions in the alpaca farms in Peru.

Perhaps we will soon no longer have to post this video, the list of companies that refrain from this product- and consequently from this cruelty to animals- is getting longer with every year.
We are very happy about it!

If the consumer can no longer find alpaca, fur, or leather in shops, then he’ll just buy something without animal suffering.
It’s that simple!

As a Vegan Englishman; I am glad we got away from all this EU junk at the beginning of this year. I find it a little odd that vegetarians are not allowed to use words like ‘milk’, but as part of this meat eating drive by the EU, people who eat Beef can be called ‘Beefatarians’. Are we soon going to see new EU legislation that says you cannot call someone who undertakes a plant based diet a ‘Vegetarian’ – as this infringes on the name ‘Beefatarian’ which now seems to be the ‘thing’ for beef eaters ! No doubt the EU will attack the plant eaters in every way they can; whilst supporting ‘he men’ who look the part by having a steak for lunch. And an additional beef eating thought – the World Health Organisation (WHO) says the strongest evidence for an association with eating red meat is for colorectal cancer. However, there is also evidence of links with pancreatic and prostate cancer.

The EU has financed m

The EU has financed more than €3.5 million to help the Proud of European Beef initiative to run for three years

Acampaign encouraging the public to become a ‘beefatarian’ has been backed by the EU.

The Proud of European Beef initiative is spearheaded by corporations Provacuno and APAQ-W. It is a three-year-long campaign that aims to makes consumers ‘confident’ about their decision to eat red meat.

The campaign is set to cost €4.5 million (approximately $5.39 million) – with ads running across countries such as France, Belgium and Spain. It will receive 80 percent (€3.6 million) of its funding from the European Commission.

‘A refusal to eat meat’

“The scope of the project is not only to highlighting the benefits of the product but to make the consumer feel identified and supported in its choice regarding it,” the campaign’s site states.

“Consumer behavior may lead to a refusal to eat meat due to the multiple types of information presented nowadays.

“But even so, those consumers who choose to eat red meat should feel at ease should they wish to reaffirm their choice for this product.”

And from the NON animal eating side; there is this video:

Should the EU promote red meat?

Despite the campaign, The World Health Organization classifies red meat as a Group 2A carcinogen.

This means products such as pork, beef, and lamb ‘probably cause cancer’.

Moreover, the WHO says the strongest evidence for an association with eating red meat is for colorectal cancer. However, there is also evidence of links with pancreatic and prostate cancer.

These Vegan athletes below look so ‘wimpy’ – looks like they need a good steak to put on some muscle !!