Above – Larry the Cat Belongs to No. 10 Downing Street – Government Residence.

WAV Comment – As an Englishman and animal activist, I (Mark) can remember for many years the fact that the Conservative Party viewed the animal welfare movement as the lowest of the low.  We; ‘the low’, always said in response; ‘do you not realise what additional votes there are from the animal / environmental movement if only you undertook some serious animal welfare issues’.  Our advice never worked; until recently that is; with Carrie Symonds doing her bit for welfare, and good others like Zak; Theresa Villiers, Sir Roger Gale and Sir David Amess; there is a realisation in the Conservatives that animals and the environment ARE actual issues that get them additional votes.  The following is an interesting article (link referenced at end) – I have included photos of thos described so that you ascertain who people are; and who ‘may be pulling green strings at No. 10’ (Downing Street.

There are two – or possibly three – interpretations of the Government’s sudden conversion to the cause of animal welfare. The inclusion of a range of measures in the Queen’s Speech, including recognising animal sentience, ending the export of live animals and taking steps to stop people keeping primates as pets, is a far cry from a Conservative Party that only four years ago was promising its MPs a free vote on bringing back fox hunting.

Many people have, of course, pointed the finger at the prime minister’s fiancée Carrie Symonds, known for her work in the field of marine conservation, now employed by the conservation charity the John Aspinall Foundation.

Gossip about her influence over Boris Johnson and his seemingly new-found passion for green issues goes back to 2019, when environment secretary Theresa Villiers told Natural England to scrap the planned badger cull in Derbyshire.

Symonds had been briefed by Dominic Dyer, until last December the chief executive of the Badger Trust, and – so the story goes – she pleaded with Johnson to intervene.

“I gave her information to give to Boris and he brought it up in Cabinet,” Dyer confirmed to ENDS. “Her intervention was significant because she understood the issue, her views were clear and she was a patron of the Conservative Animal Welfare Foundation (CAWF), a group that had worked hard to build a platform against badger culling.”

The NFU later took out a Judicial Review against Villiers’ decision, and the High Court judgment – though it rejected the farmers’ claim – found considerable evidence for Johnson putting pressure on DEFRA ministers to halt culling in Derbyshire.

In fact, Dyer believes it would have been easy to persuade Johnson that stopping the cull was the smart thing to do. The county was in the middle of the so-called ‘Red Wall’ that the Conservatives would target in the looming (though yet to be announced) General Election. “She told him you could be shooting badgers that have been vaccinated, and there’s no public support for that – that’s why he intervened,” Dyer said. “He didn’t want this issue coming up on the doorstep.”

But there’s another view. CAWF founder Lorraine Platt has been working for more than a decade with sympathetic MPs to fundamentally change the party’s approach to all manner of animal welfare issues. “It’s important to remember that patrons have had key influential roles in promoting animal welfare for many years, sometimes decades,” Platt told ENDS. “Sir Roger Gale and Sir David Amess have both been in Parliament for 37 years.”

And, indeed, Platt argues, Johnson wrote a piece in the Daily Telegraph in 2018 arguing for an end to live animal exports. “He used his first speech on the steps of Downing Street as prime minister to talk about animal welfare, the first PM to have done that,” she said.

But if the animal welfare and broader environmental issues are really genuine passions for Johnson, then he appears to have a mixed record in advocating them. True, he’s written pieces about elephants and pangolins, but go back a decade or more and you can find articles questioning the science of climate change and rejecting recommendations from the UN’s Intergovernmental Panel on Climate Change.

“If they seriously believe that I am going to give up eating meat – in the hope of reducing the temperature of the planet – then they must be totally barmy,” he wrote. Does this suggest that his embrace of green issues is superficial or that it has come later, raising once again the influence of his new partner?

CAWF patron Sir David Amess suggested to ENDS that giving Symonds all the credit for the government’s commitment to animal welfare would be to ignore the work of many other people.

“I can’t pretend to know the lady, I’ve met her once at the Conservative Party conference,” he said, “but I’ve got no evidence for her influence over these issues. I know that [environment secretary] George Eustice and [environment minister] Zac Goldsmith were talking positively about these things way before she came on the scene.” Dyer also acknowledges the considerable influence of Goldsmith in Number 10.

So, Johnson’s new-found commitment to animal welfare could be down to Symonds, but it could also – or equally – be down to the fact that the Conservative Party, and the people who vote for it, have changed. Changing tack makes political sense.

And the third possibility? That it is intended to distract from other other measures, such as the proposed reforms to the planning system, that will have adverse impacts on the environment. Throw the blue-green voters a bone so they look away from potentially less palatable actions elsewhere, could be the thinking.

Dyer agrees there are contradictions within the Conservative agenda, whether it’s HS2 or airport expansions. “These are big issues and there are vested interests that will push back the other way,” he said.

Symonds, in other words, may have influence, but so do plenty of other people.

The short-finned mako is a shark that can be found in almost all seas on earth.

However, its widespread distribution does not prevent it from being extinguished. The stocks are showing strong signs of overfishing and the animal has long been on the red list. 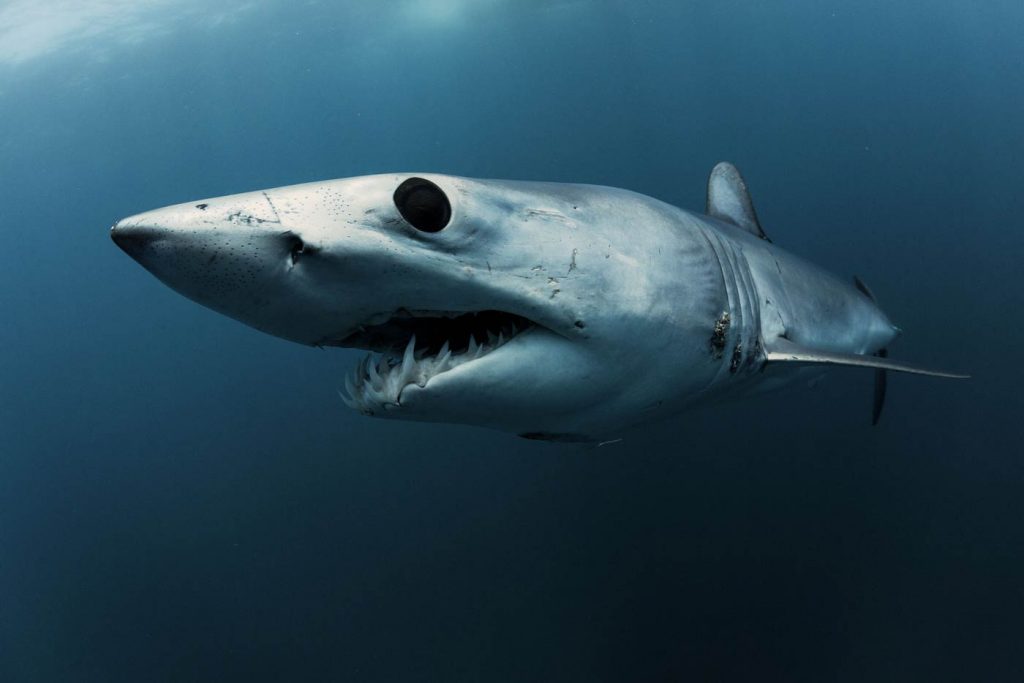 Most of the mako ends up as bycatch in the nets of the fishing industry. But it is also caught specifically to eat its meat, cut off its fins or just for pleasure. 3000 tons of the ocean shark are landed in the ports of the North Atlantic every year.

The EU is responsible for 55 to 76% of the landings, mostly Spanish ports.

Swift and drastic measures must be taken to keep short-fin mako populations from becoming extinct. An in-depth investigation was conducted in 2017, which found that a recovery would be possible in the coming decades – but only if shark trapping is immediately and completely stopped.

For four years, however, the EU has been putting its hands on its lap, nothing has happened.

In the meantime, the forecasts have clearly deteriorated. Another meeting will take place in 2021 to vote on global fishing quotas. Is the EU finally coming to its senses?

Only the EU and the US are still against the moratorium on short-finned mako. All other states will vote in favor. And I mean…Mako sharks grow and reproduce slowly.
Females are slow maturing at approximately 18 years, while males mature much sooner, at 8 years.
Similar to great white shark pups, once born these baby sharks are left to fend to for themselves.
That means: a female shortfin Mako shark is estimated to reach sexual maturity at around 18 years, giving birth to relatively small litters (4-25 pups every 3 years).
Let’s think about what this means for a moment.

A female Mako sharks reproducing and giving birth to a litter for the first time this year would have been born around the year 2003!
This life history characteristic makes these apex predators extremely vulnerable to over-exploitation.

We read in the report that in 2019 and 2020 the EU even voted against restricting mako fisheries.
Like USA too.

But what common economic interests does the EU have if it supports the USA in eradicating Mako sharks from the oceans?
Actually none.
It is only because the EU has only ever cooperated with the powerful, no matter whether it’s the USA, the auto industry or the meat mafia

At the next meeting we will not be surprised if the EU re-enters as a cooperation partner of the USA and represents the interests of criminals again.

Another case of cruel monkey trade and serious violation of the Animal Welfare Act: In a new research, PETA investigators were able to locate an exotic dealer who was offering baby monkeys a few days old on an exotic platform for self-rearing. Shortly after the birth, the baby monkeys were to be snatched away from their mother and then sold for € 1,000.

We at PETA Germany became aware of an exotic trader from Bitterfeld-Wolfen (Germany) via a relevant internet portal, who was offering “baby monkeys a few weeks old to continue feeding” on the internet.
Undercover, our investigators contacted the dealer and pretended to be interested in one of the monkey children.

Together with ARTE TV-Sender: we, PETA Germany uncovered this case.

During a visit by the investigators on site, the dealers reported that they had been selling baby monkeys in this way to customers around the world for several years. Only recently a monkey was sold to Latvia with an exotic courier.

The monkeys would be torn away from their mother 10-14 days after birth and then bottle-raised. In the case of triplet births, one of the children would be separated from the mother immediately after birth.

In addition to the common marmosets, red-hand tamarins, marmosets from the Czech Republic and cites, protected list monkeys were kept in the dealers’ garden.

Other animals are housed with the dealer’s father for reasons of space.

Various exotic species of monkeys were found in the garden of the dealer.

The early separation of the common marmoset monkey children from their parents is a criminal offense according to §17 No. 1 of the Animal Welfare Act.

END_OF_DOCUMENT_TOKEN_TO_BE_REPLACED

*There’s no McCafe on a dead planet.*

McDonald’s distribution centres which supply around 1,300 restaurants have been blockaded by animal rights protestors demanding the chain goes vegan.

Around 50,000 members of Animal Rebellion have descended on four of the fast food giant’s major sites in a bid to persuade it to introduce a fully plant-based menu by 2025.

Read the latest and see photos at: