Germany is world champion in the industrial killing of pig

Maybe we should import dog meat in return?

Balance of an “animal friendly” country for the year 2018:

– Animal rights activists are criminalized,
– Piglets must be castrated until 2021 without anesthesia.
– Chicks are shredded alive
– Advertising for school milk and meat is done by the state
– School canteens offer pork
– The protection of the wolf is to be lifted in the future
– Animal transports to third countries should be continued
– Animal transports without limit will continue to be approved
– Process of monkey torments is discontinued

And now the tons of export meat in numbers!

“Since the turn of the millennium, exports of meat and dairy products to China have multiplied thirtyfold, with pigs in particular being popular: German traders exported 2.4 million tonnes between January and October 2017, accounting for just under a fifth of slaughtered pigs meanwhile well over half of the exports to China, as data from the EU Commission and the Agricultural Export Report 2017 shows.
The export business has gone so well in recent years that German companies (Tönnies)  started breeding more pigs again. In November 2017, they kept about 27, 5 million animals and about 378,000 more pigs than in May. “

One of Germany’s most important trading partners in pig exports is still China. Exports to the country remained well above the previous year. Just over 40,000 tons of pork wereexported to China in the first five months of the current year, more than in 2017.

The Tönnies Group, Germany, continues to be one of the five largest pig slaughterhouses in the world with 3.04 billion Euro private wealth. Where does come it from?

Thanks to the indifference of the German population to mass industrial killing!

And above all, thanks to the shameless lobbying policy of a corrupt ruling coalition, that is proving to be a leading force in the export of weapons and animal corpses right now.

Despite the many setbacks, despite anger and sadness, we continue to fight.
We lose neither the hope nor the strength to fight.

Because giving up gives this system a simple hand to commit crime and exploitation against the animals.

Over 100 whales are illegally confined in appalling conditions in the waters off Russia’s Pacific Coast, in what the local media has appropriately nicknamed a “whale prison.”

Kept in cramped, tiny cages, some of the whales have been unscrupulously sold to Chinese aquariums, in direct violation of an international ban on commercial whale hunting that restricts the sale of these intelligent marine mammals.

In early November, a disturbing video appeared online, showing one of these whales being torturously hoisted by a crane in preparation for transport to an unspecified destination.

Between 2013 and 2016, 13 Orcas were reportedly exported to China by unnamed companies, who sold their helpless victims for as much as $6 million each — quite possibly profiting from China’s booming marine park industry.

Even more disturbingly, evidence shows that some of these cruel cages contain infants, which is illegal under all circumstances.

Russia is believed to be the only country in the world that exports wild Orcas, and if nothing is done to stop this, the rate at which they’re being caught and killed will ultimately lead to the species’ demise.

Until recently, the cruel imprisonment of these endangered whales was shrouded in mystery and deceit. It is imperative to race against the clock to ensure the survival of what’s left of these already-threatened species.

Sign this petition urging the Russian Ambassador to the U.S., Sergey Kislyak, to do everything in his power to shut down the whale prison and halt all whale trading out of Russia’s waters. 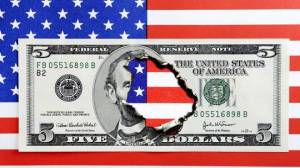 $2.4 million daydreaming study and a very scientific examination of the sex habits of coked-up quails topped Senator Rand Paul’s annual list of maddening government waste, which this year clocked in at $114 million.

Last week, the Kentucky lawmaker issued his fourth installment of the annual ‘Festivus Waste Report,’ which names and shames some of the US government’s most egregious spending choices.

The waste is humorously documented in this year’s report. Some of the examples include the National Institutes of Health (NIH) spending $2.4 million to study daydreaming, and another NIH study, costing $874,000, which researched the sexual habits of quails that were high on cocaine.

My comment: So far, the Labor Mafia (almost all over the world) has brutally tortured millions of monkeys with our money to allegedly cure Parkinson’s, dementia, or Alzheimer’s. Without success until today.
Now the Labor Mafia in the US is collecting an extra helping of millions to research the sexual behavior of the quail under cocain!!
Is anyone so perverted or stupid to believe that experiments are being made for the good of humanity?