All pictures are from our own archive – WAV.

On Saturday 6th April, we’ll be taking to the streets to demand a ban on foie gras imports!

We’ll be holding a peaceful protest outside a restaurant which serves foie gras in central London, and events will be happening in towns and cities across the country in solidarity.

Despite foie gras being illegal to produce in the UK due to the cruel force-feeding involved, we still import around 200 tonnes of it every year. Although feedback from the government about the possibility of a ban has been positive, we have yet to receive a firm commitment.

Now is the time to up the pressure and ensure the import of this barbaric product is banned as soon as possible!

Events are taking place in Bath, Cambridge, Cheltenham, Grimsby, Peterborough, Portsmouth and Worthing, as well as the protest in London.

Activists will be gathering petition signatures and encouraging people to send postcards to Michael Gove to show their support for a foie gras-free Great Britain.

If you’d like to organise an event near you, just email us and we’ll provide you with everything you need to make it a success!

Thank you for your support,

Press Release from our animal friends at GAIA in Belgium.

“It’s a great day for hundreds of thousands of minks who suffer each year in Flanders and are gassed for their fur. Flanders will also end the cruel practice of foie gras production.”

Global Action in the Interest of Animals (GAIA) applauds yesterdays unanimous decision by the Flemish parliament to ban fur farming and force feeding for fois gras production. The members of the Flemish parliament unanimously agreed the decision proposed earlier by the Flemish government on the initiative of Flemish animal welfare minister Ben Weyts (N-VA). GAIA president Michel Vandenbosch, who was involved 30 years ago in founding the very first anti-fur association in Belgium ‘Comité Anti Fourrure’, witnessed this reward after more than a quarter of a century of actions and campaigning against the suffering and abuse of hundreds of thousands of minks and ducks. Michel Vandenbosch: “Yesterdays agreement to forbid the practice in Flanders follows bans in Wallonia (in 2015) and the Brussels Region (in 2017) and means that the entire country will be free of fur farming by 2023 at the latest. Moreover, by banning force feeding, Flanders also joins the European top when it comes to animal welfare.”

By 1 December 2023 at the latest, the last of the 17 remaining fur farms and the only company in Flanders still to force feed ducks for the production of foie gras will have disappeared. The companies concerned will receive degressive compensation from the Flemish government.  The sooner they stop, the higher the compensation will be. The government is to provide a total of 10 million euros for this purpose. 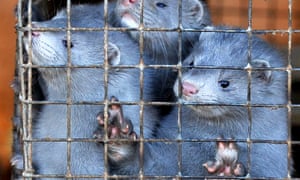 No support for fur
Wallonia and Brussels already banned mink farming in their regions back in 2015 and 2017 respectively. In Flanders there are still 17 active mink farms holding an annual combined total of around 200,000 minks (mothers and young) in captivity. The animals live for 7 to 8 months in a tiny cage before being gassed and ending up as a garment or accessory in the shops. These are wild animals and display highly neurotic behaviour in captivity (incessantly jumping up and down, self-mutilation, etc.). “It pays to persist. Breeding and killing animals for their fur alone is completely outdated”, stresses GAIA president Michel Vandenbosch. “A great majority of the Flemish people shares this opinion.”

The fact there is no social support for fur production is repeatedly demonstrated in surveys. The last survey, conducted by Ipsos in 2015 on behalf of GAIA, showed that 85% of the Flemish people agreed to the ban on the breeding and killing of animals for fur.

Jean-Claude Van Damme and Pamela Anderson
GAIA stepped up its fight against mink farming in Flanders over the years with numerous campaigns. In 2011, the organisation teamed up with Jean-Claude Van Damme to launch the campaign ‘The Victims’. At the end of December 2017, none other than Pamela Anderson wrote a letter to the Flemish minister Ben Weyts calling him to take urgent action on the ban.

So far a ban has been enforced in eleven other European countries: the United Kingdom, Austria, the Netherlands, Norway, Croatia, Slovenia, the Republic of Bosnia and Herzegovina, Serbia, the Republic of Macedonia, the Czech Republic and Luxembourg. Big fashion labels like Gucci, Armani, Hugo Boss, etc. are also excluding fur from their collections. The list keeps growing. “Fashion and ethics go increasingly hand in hand. We are delighted that Flanders will now contribute to a fur-free world”, says Vandenbosch.

Ban on force feeding
The ban on force feeding calls a halt to a cruel form of animal abuse in Flanders which remained in only one West-Flemish company. The Brussels Region already enforced a ban on force feeding for the production of foie gras in 2017. Resistance to force feeding is also growing across Europe: 12 European countries have already launched a formal ban or interpret the law for the protection of animals in such a way as to condemn the practice. Only 5 EU countries are still producing foie gras (France, Spain, Bulgaria, Hungary, Belgium). “We are committed to continue our campaigning in Wallonia, where 9 producers continue the use of force-feeding methods.”

The biggest danger for lambs is not the wolf, but Easter!

The second largest bear population on the European continent (after Russia) lives in the Romanian forests.
It is estimated that this is about 6,000 brown bears, but a scientifically sound census of the brown bear population has not yet taken place.

Nevertheless, since July 2018, the hunt for bears is again permitted, and approved by the government. The previous months had been preceded by media reports of increasing bear attacks on people, settlements and farm animals in some regions of Romania. The World Animal Society criticizes this decision: Instead of releasing the brown bears for shooting, must be set at the true causes of human-bear conflicts.

Between 1989 and 2016, several hundred brown bears per year were killed in Romania – plus a high level of unreported killings by poachers. Strong public protest eventually led to the fact that in October 2016, the Romanian Ministry of the Environment suspended the hunting rate for brown bears.

Since then, the media have been reporting an increasing number of attacks from bears to humans. A Romanian local politician argues for Harghita County – located in the northeast of the Transylvania region – to double bear attacks on people, settlements and farm animals to a total of 263 cases within one year!!.

As a primary solution, the Romanian government now plans to launch the brown bears and in July 2018 recognized the brown bear hunt as a permissible measure by approving the National Action Plan. How, when and where this should be implemented is not clear from the National Action Plan. But how is that to be rated from an animal welfare point of view?

Conflicts between man and bear

First of all, it must be stated: Humans do not belong in the prey scheme of a bear. However, when animals approach human settlements, or bears in the wild feel threatened by humans or want to protect their young, conflicts can occasionally occur. The main cause of bear attacks is the man-made habitat loss of the bear.

Habitat loss of the bears

Brown bears are increasingly losing their natural habitat and shelter in Romania. Infrastructural measures, such as road construction, dismantle the habitats populated by bears. On the other hand, illegal exploitation of Romanian forests, such as forest clearing and building permits in national parks, destroys the livelihood of the bears. For example, the Austrian timber company Schweighofer was heavily criticized in 2015 for systematically selling illegally harvested timber for years;
Sanctions and fines for illegal logging were either reduced or abolished by the Romanian government.

The brown bears are consequently expelled from their territories and have to look for other food sources. As a result, the bear continues to advance into areas inhabited by humans, farmers fear for their animals, and refuse bins on the outskirts of villages, which are located near the forest areas, also attract foraging bears.

The resulting conflicts are used as a pretext to justify the shooting or capture of the animals, rather than to address the causes of habitat loss.

The brown bears have been read from their territories and have looked at other sources of food. As a result, the bear continues to fear for their animals, and refuse bins on the outskirts of villages, which are located near the forest areas, so attract foraging bears.

According to a report by “Spiegel” from 16.12.2017 ( http://www.spiegel.de/wirtschaft/soziales/rumaenien-holzt-seine-waelder-ab-holzmafia-nutzt-gesetzesluecken-a-1180739.html ) in recent months, primeval forests in protected national parks have been destroyed several times through utilization, forest clearance and illegal building permits.

Estimation instead of counting the brown bear population

Another reason for the hunt is stated that the domestic forest of its size exclusively provides habitat for 4,000 brown bears.
However, a comprehensive, official bear count has not been used to capture the actual size of the brown bear population.
Instead, the number of 6,000 brown bears is based solely on the estimates of hunting associations. In the past, the regional hunting associations received a launch rate, which was then sold through auctions to private hunting companies worldwide (!!!).
These in turn allowed trophy hunters from all over the world – including Germany – to shoot down bears in Romania.

Should a hunting quota be set by the Romanian Ministry of the Environment in the future, many foreign hunters will return to Romania to hunt for brown bears, probably also many trophy hunters from Germany.

My Comment: When it comes to legalizing the killing of wildlife, the media deliberately confuses effect with cause. Wrong numbers, panic machismo and horror scenarios reach the public.

For many years, the forest in Romania has been ruthlessly cut down. Not only from the indigenous wood mafia, but also from other wood -mafia countries of Europe ( see above the report about the Austrian Holz Mafia “Schweighofer”).

The wooden mafia cleverly exploits leeway and gaps in the law, and corrupt politicians and government officials are covering it. So more and more forest is disappearing and the habitat of the bears and many other animals as well.

And as soon as the animals are forced to search for food in residential areas, the machinery of death begins for them:
the hunters demand higher firing quota, the government approves it because it brings, as hunting trophies, the hunting associations the most money. And every government in this world works hand in hand with hunters.  The main thing is that our European parliamentarians  just keep their butts on the chair and they do not want to do anything about environmental crimes or control the protection of endangered wildlife.

Result of the story: the “problem” with the bears in Romania, and not only there, is a man-made problem.

In the comments, I read that the Germans are angry with the “corrupt” Romania, because the government has approved the official launch.

Yes , Yes…
… and we shoot the newly arrived wolves out of panic … because they could be dangerous in our walk in the woods!! Other countries need to protect the wildlife, while we’ve flattened everything that lives in the forest here.