We are supposed to have EU so called ‘Politicians’ to address such problems as these. This May EU citizens are expected to vote for new Members of the European Parliament (MEP’s). The animals in these photos have no voice; except via us, and if they do not get support from EU politicians, people that ARE supposed to be addressing and approving animal welfare in the EU; then one has to ask if anyone is worthy of your vote in May. When, and only when they address such issues as this, will they be worth even considering.

Wonder why the UK wants to get out of Europe ?

Nearly all rabbits farmed for meat and fur are kept in small, barren cages where their natural behaviour is severely restricted. Rabbits in intensive farming systems experience very bad welfare

In intensive rabbit farms, all three of these are compromised by confinement in barren cages, unsuitable social environments, injury and disease and through rough handling at slaughter.

Rabbits are the fourth most farmed animal in the world and most are kept in barren environments, usually in cages. In the European Union the majority are housed in tiny wire cages within large sheds containing 500 to 1000 breeding does (females) and 10 to 20 thousand rabbits reared for meat. Although farmed rabbits are domesticated, they have the behaviours and motivations of their wild counterparts, and many of these are thwarted in intensive systems.

Currently there is no species-specific legislation protecting the welfare of farmed rabbits in the EU. A few countries within the EU (Belgium, Germany and the Netherlands) have species-specific requirements for rabbit farming but they produce only a very small percentage of rabbit meat farmed in the EU.

Young rabbits reared for meat (referred to as “fattening rabbits”) are typically caged in groups with 450 to 600cm² space each in the EU; this is less than the area of an ordinary A4 sheet of paper. Adult breeding does are typically housed singly, in cages that are just 60 to 65cm long, 40 to 48cm wide and 30 to 35cm high.

Cages are simply not acceptable. With barely any space, rabbits cannot adopt normal postures such as lying stretched out, sitting and standing with their ears erect (species typical “look out” posture) or rearing up to explore their surroundings. They cannot move normally or comfortably, and some don’t even have enough space to perform a single hop. This is bad for their mental well-being, and the lack of exercise can also lead to weakened bones.

The majority of farmed rabbits are reared in barren environments, with just a drinker and feeder and a wire mesh floor. This does not allow for natural behaviours such as digging, hiding and foraging, and leads to abnormal behaviours such as over grooming and repetitive gnawing on the bars of the cage.

In the wild rabbits spend much of their time feeding on grass and other plants, eating lots of high-fibre roughage. In contrast, most farmed rabbits are fed a pellet-only diet which is eaten in a fraction of the time. This leads to boredom and frustration.

Rabbits are social animals and usually live in stable groups in the wild. Serious aggression is rare once a stable hierarchy has been established.

Fattening rabbits are usually housed in pairs or groups, but they are kept in very close confinement so are unable to move away from each other. This may be particularly stressful for rabbits as they get larger and have even less space, and when they start to reach sexual maturity they can become more aggressive.

Breeding rabbits are usually kept in individual cages. This denies them opportunity for natural social behaviours, such as grooming. However, the rabbits are kept right next to each other in the cages, which also stops them from being able to move away from each other. In the wild, females keep their young in isolated nests, far away from the rest of the group, so this close proximity to other females is likely to be very stressful to them.

Singly housed rabbits show more abnormal stereotypical behaviour, such as over grooming and gnawing at the bars of their cage, than those housed in groups. Breeding rabbits can be housed successfully in groups if they are given sufficient space and adequate nesting facilities to avoid aggression problems.

The mortality rates for commercially farmed rabbits are very high. Typically, 100 – 120% of breeding does die or are culled and replaced each year, and 15 to 30% of fattening rabbits die before slaughter (which happens at 8-12 weeks old). Respiratory and intestinal diseases are the main reason for such high mortalities and cause acute pain.

Rabbit cages are made of wire and sometimes have metal sheet sides. The floor is often made entirely from bare wire, which is uncomfortable to stand on. Breeding male and females kept on bare wire often develop sores on their footpads and hocks. These sores can cause chronic pain and are a common reason for culling.

Does are commonly given hormone treatments to control their reproductive cycles and get them ready to breed at the same time. They are artificially inseminated within 11 days (on average) after giving birth to their last litter, and have been bred to produce larger litters. Their bodies are put under huge strain from this intensive reproduction cycle. It can lead to loss of body condition, metabolic diseases, and increase the risk of spinal deformities.

In the EU commercially slaughtered rabbits are usually electrically stunned before slaughter. Research has shown that rabbits may be frequently incorrectly stunned. Rabbits are hung individually upside down for the electrical stunning which is stressful and may cause pain and/or injury if their weight is not supported properly. This is a particular problem for larger rabbits.

There are alternatives to farming rabbits in cages, which can improve the welfare of farmed rabbits.

In some countries there are alternatives to barren-cage farming of rabbits, which can improve the welfare of farmed rabbits. However, there are still problems associated with these systems, as it is intensive production and research is ongoing. 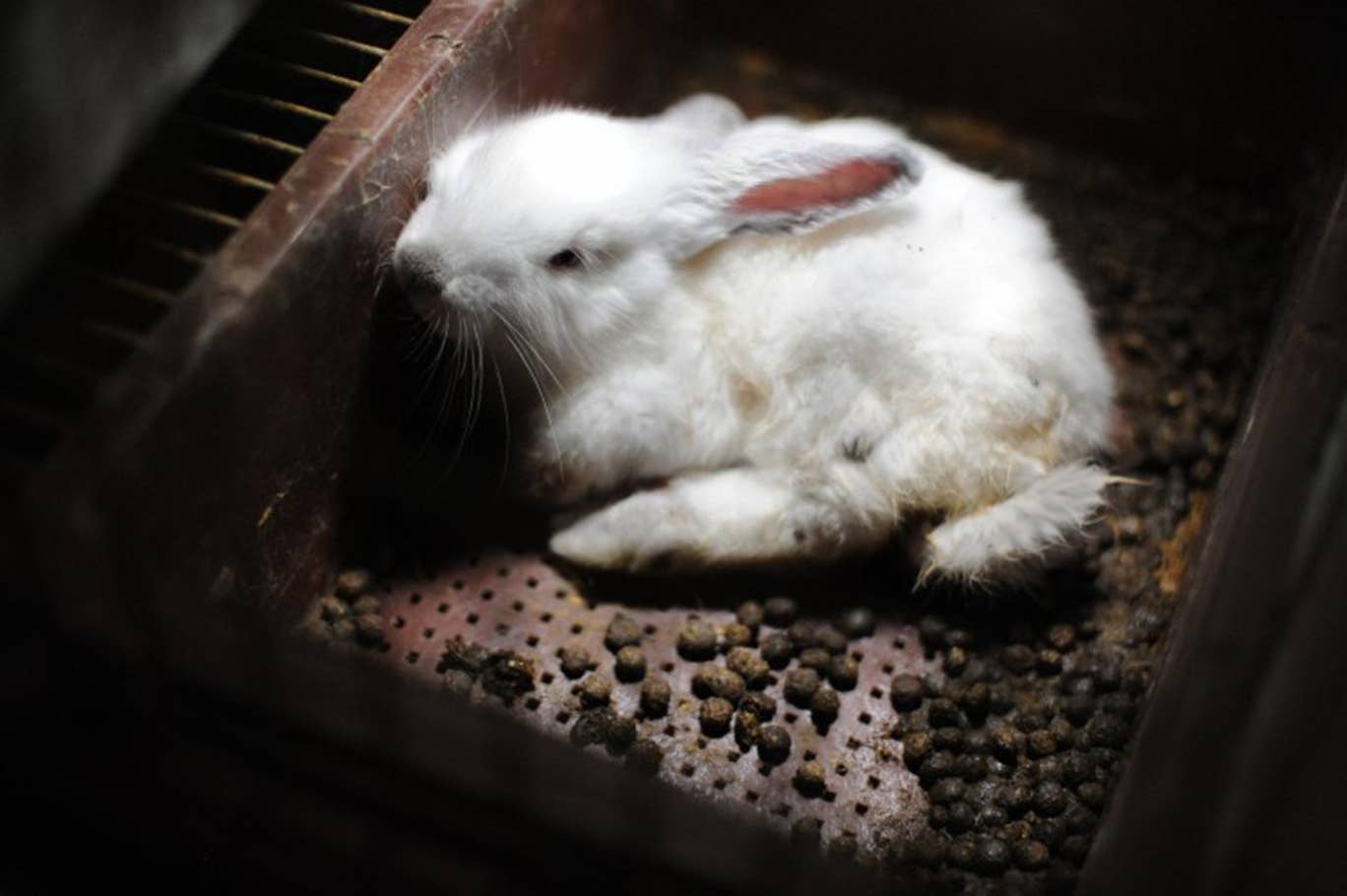 A rabbit lies at the bottom of a cage, surrounded by faeces 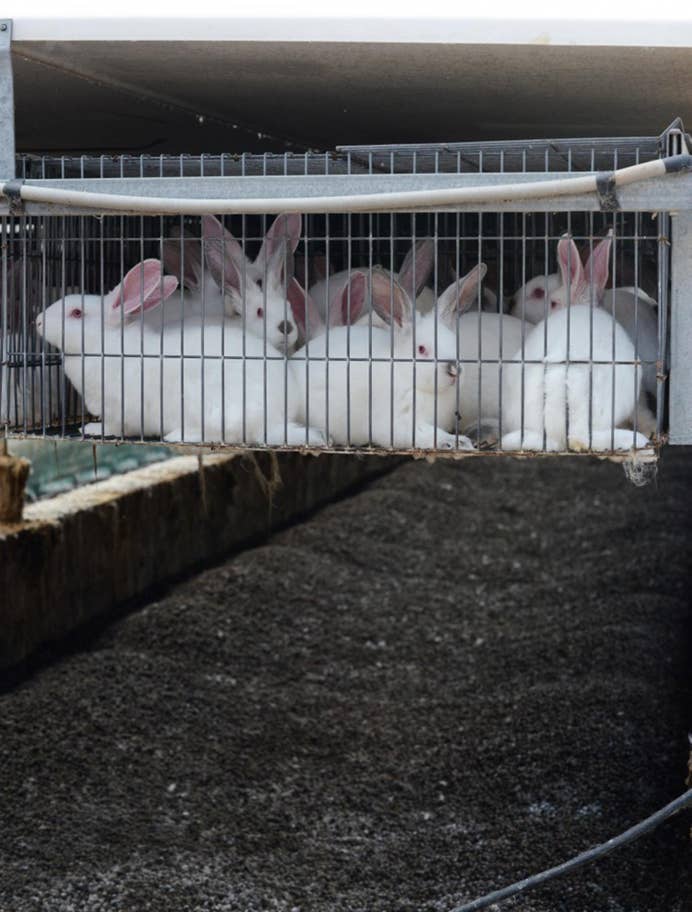 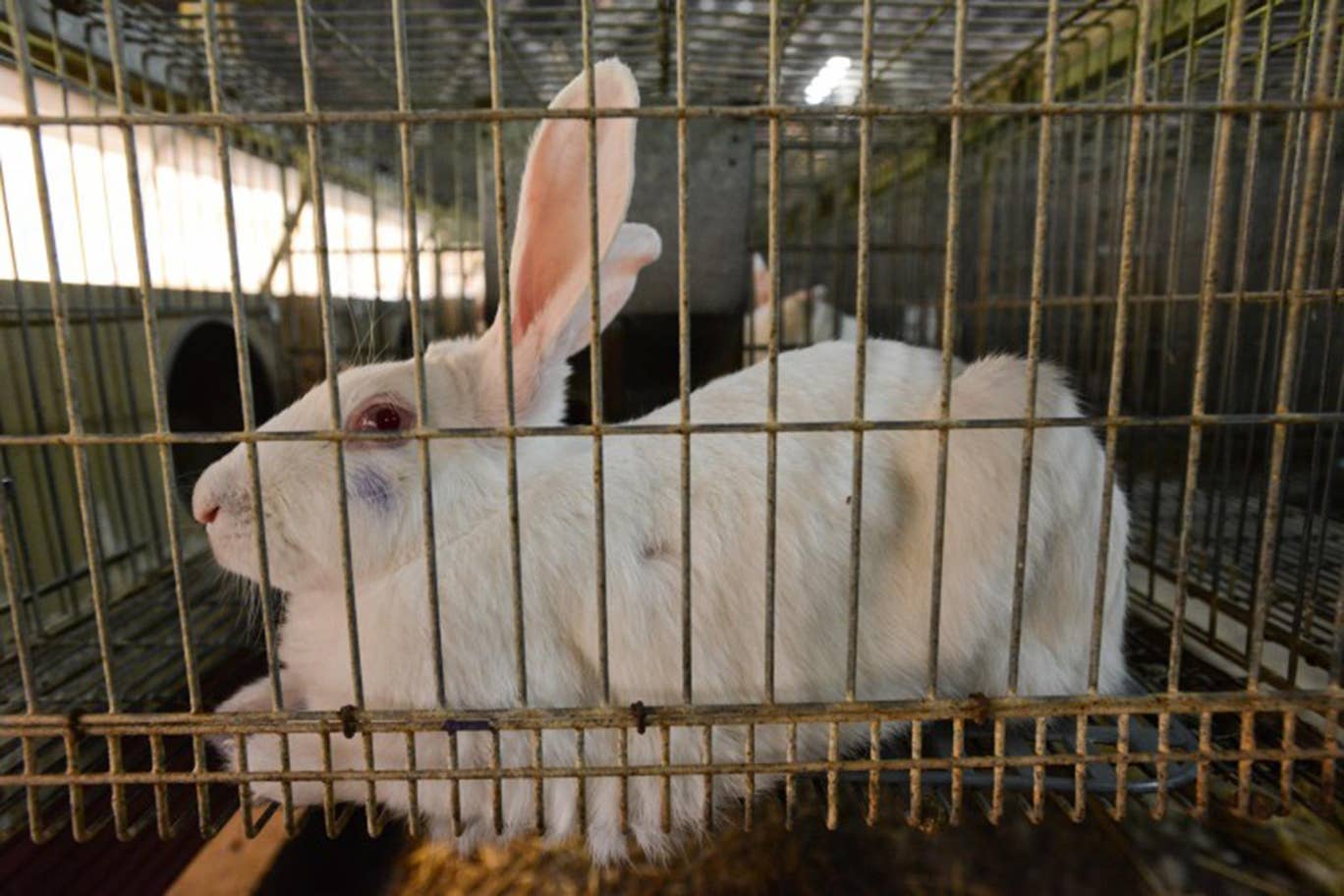 Rabbit in a breeding cage 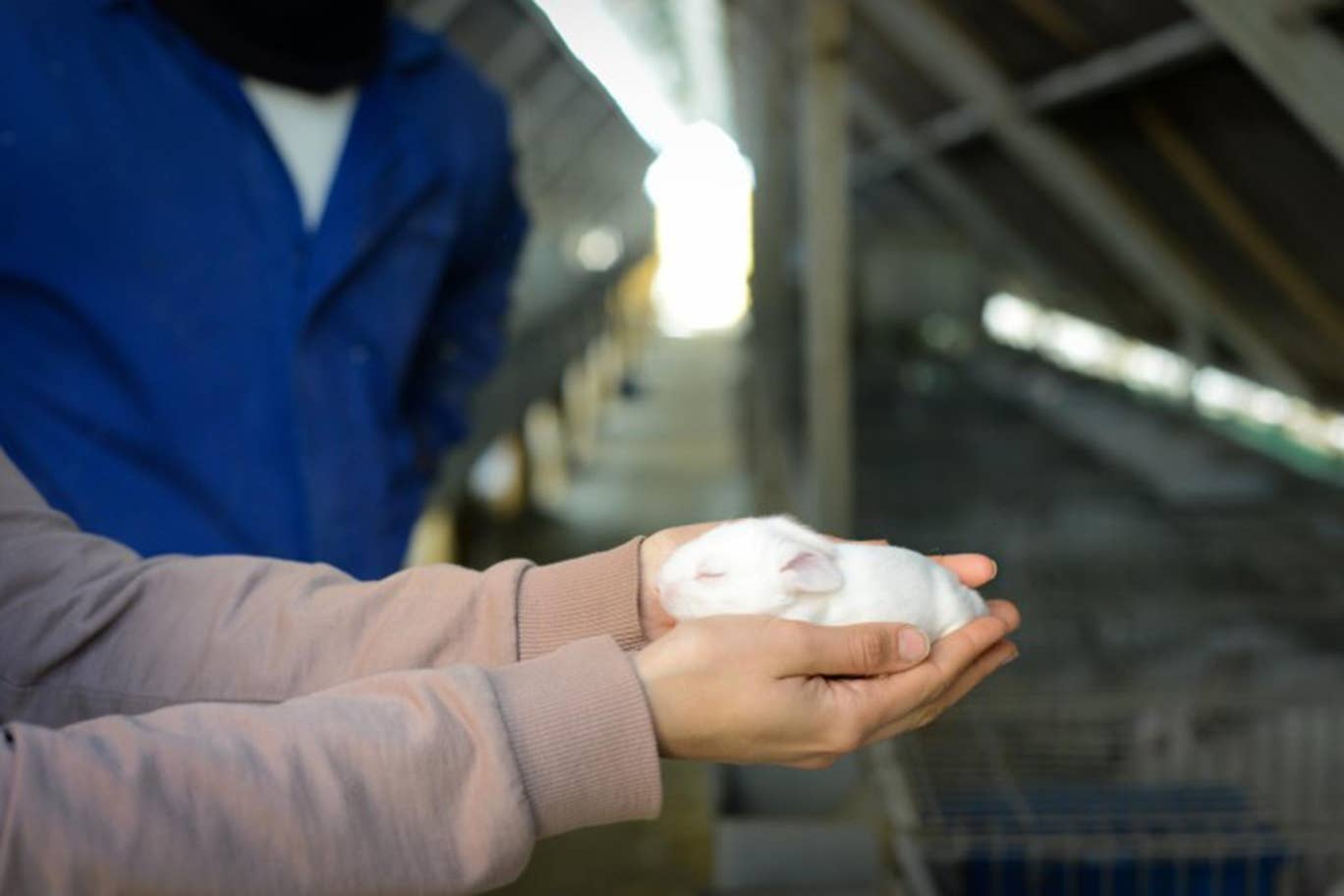 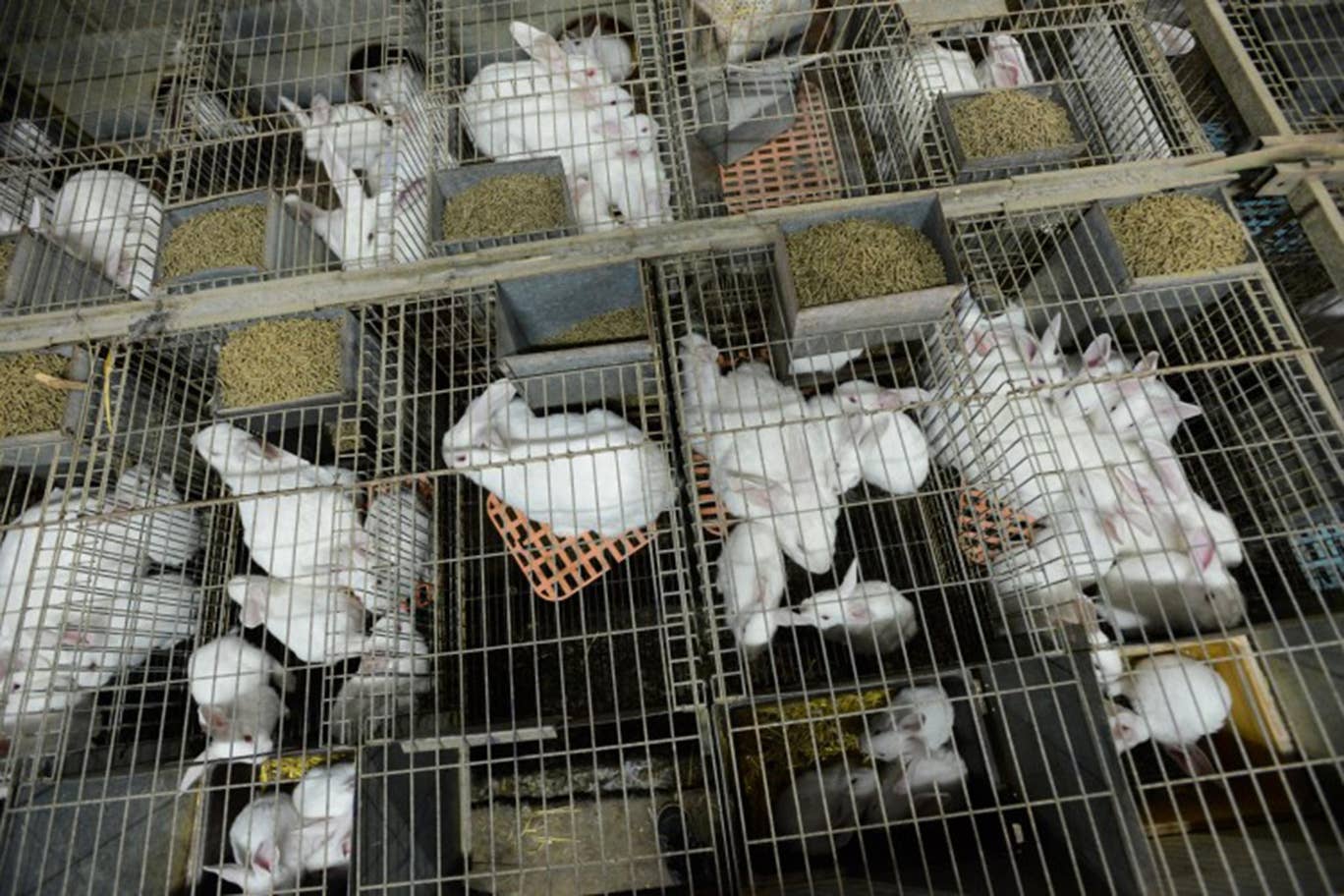 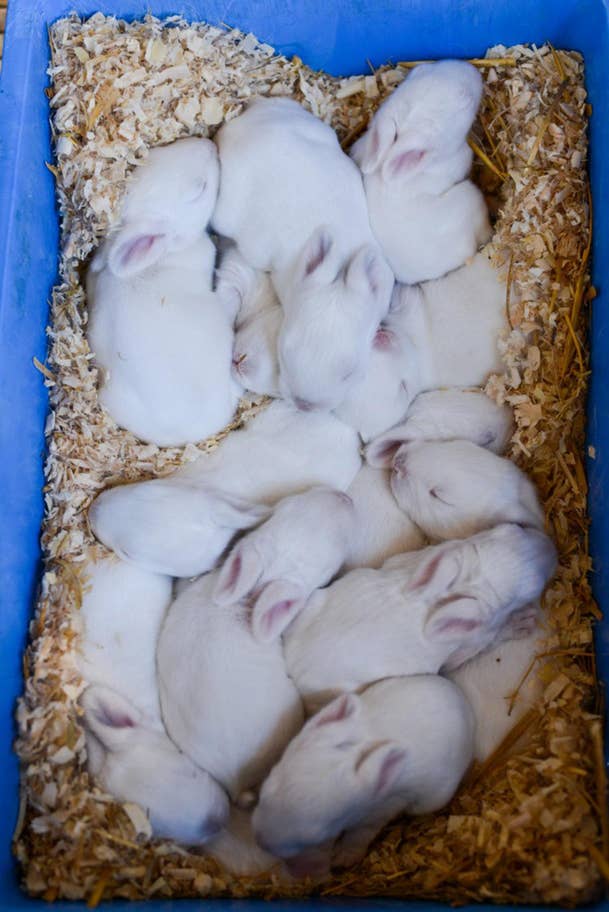 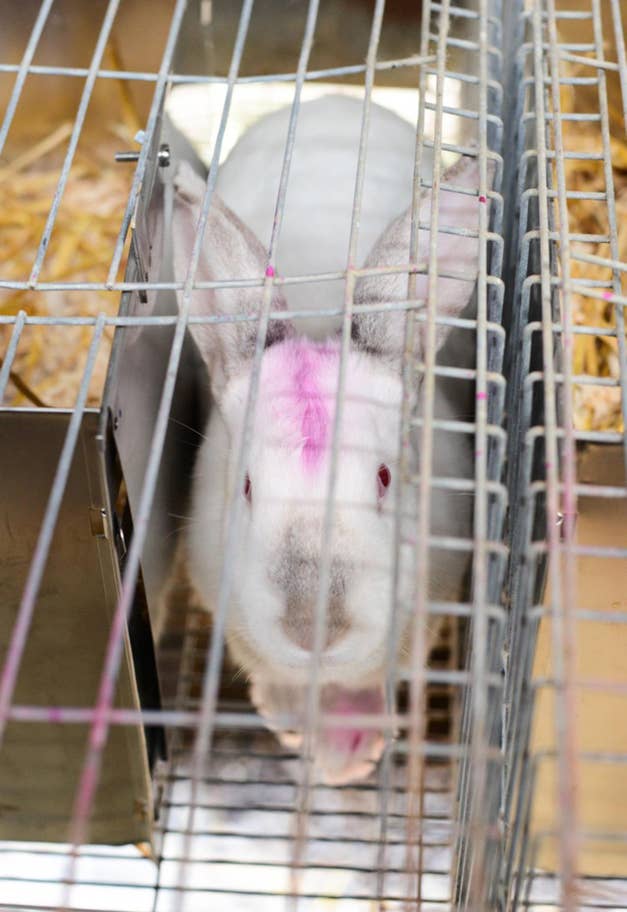 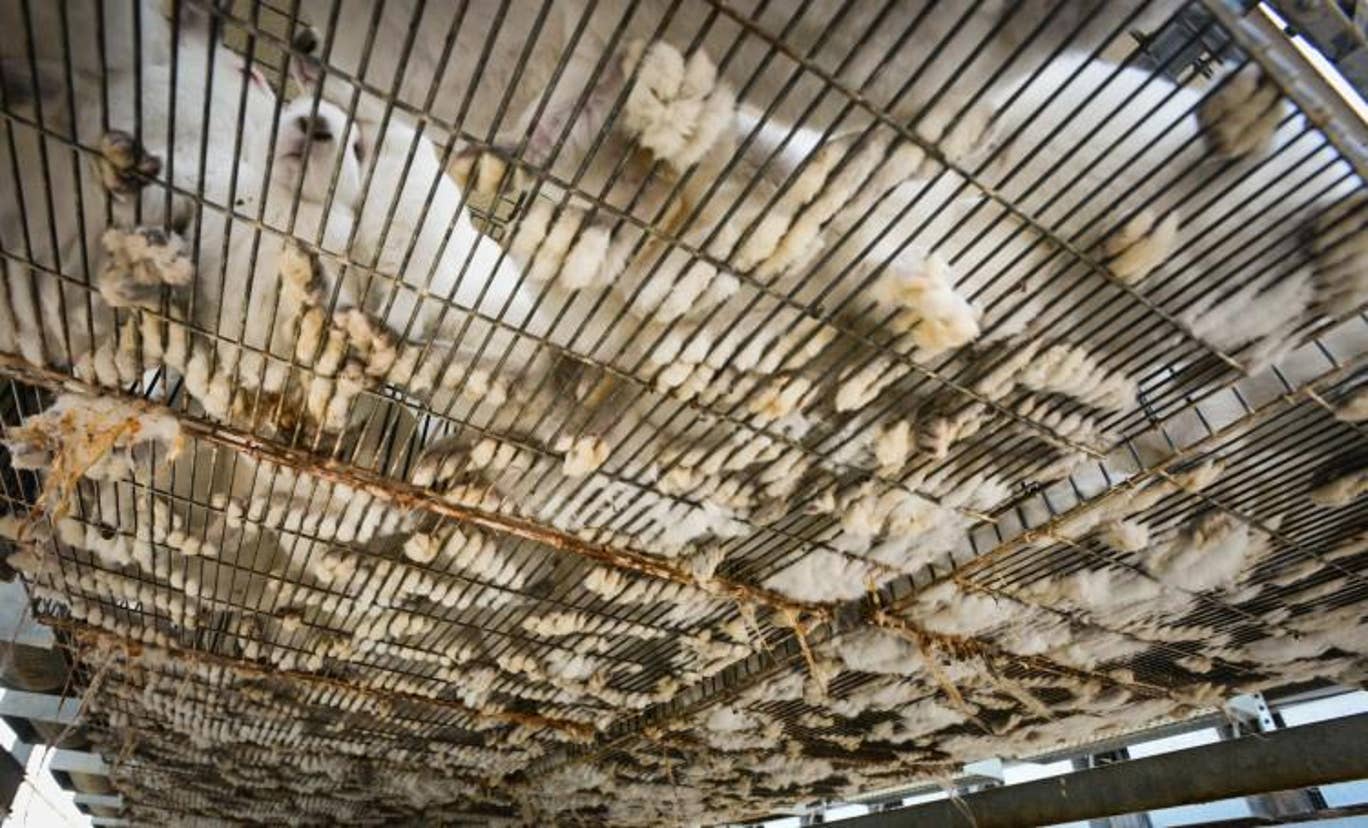 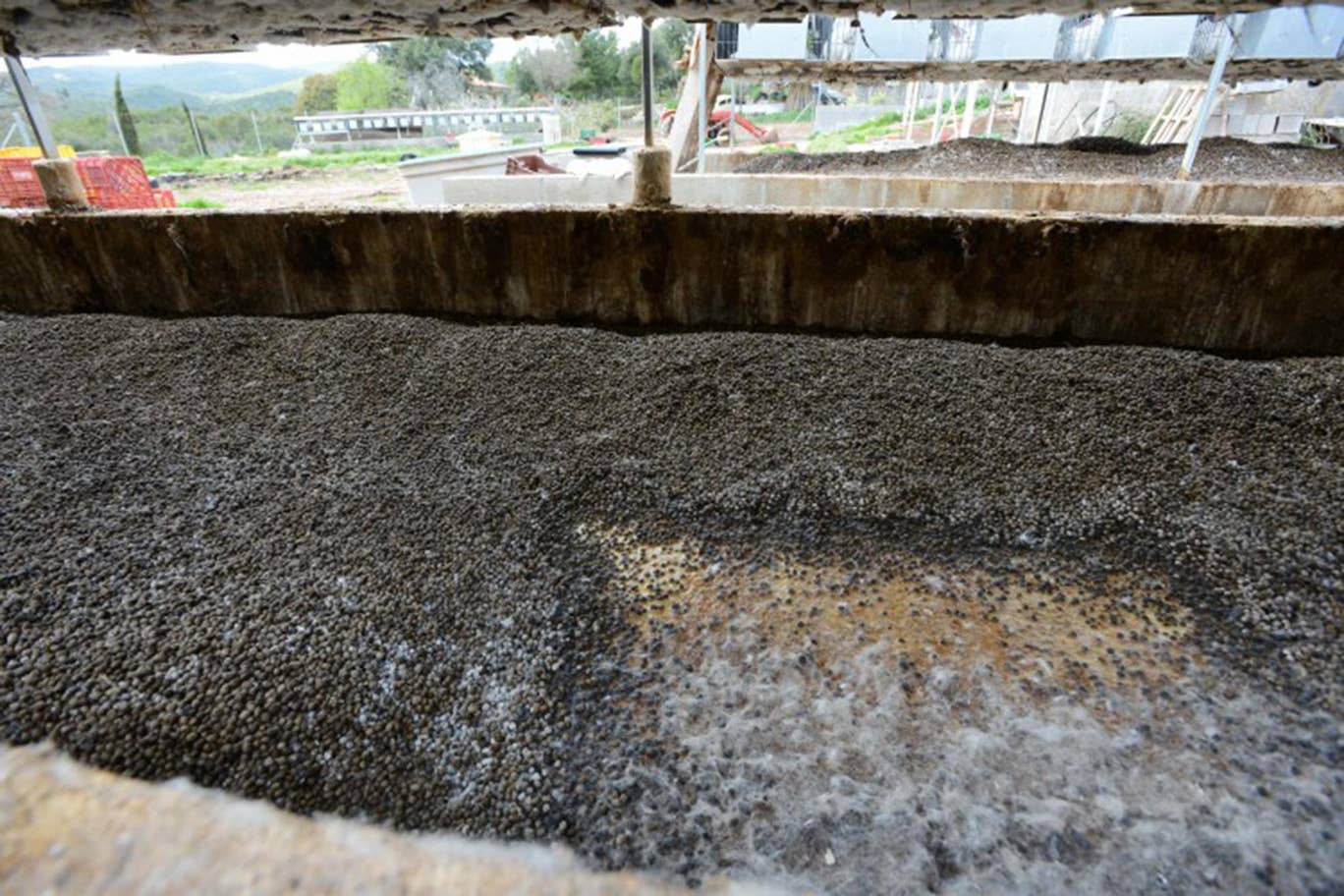 Excrement below cages on a breeding farm. 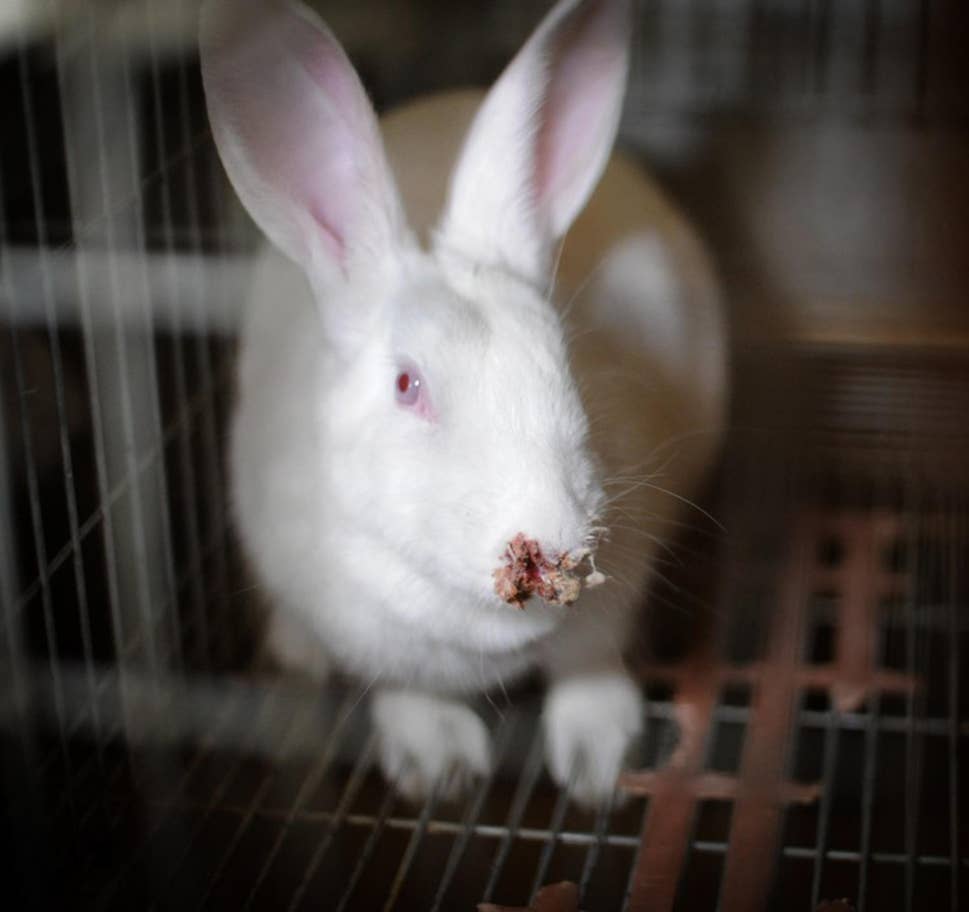 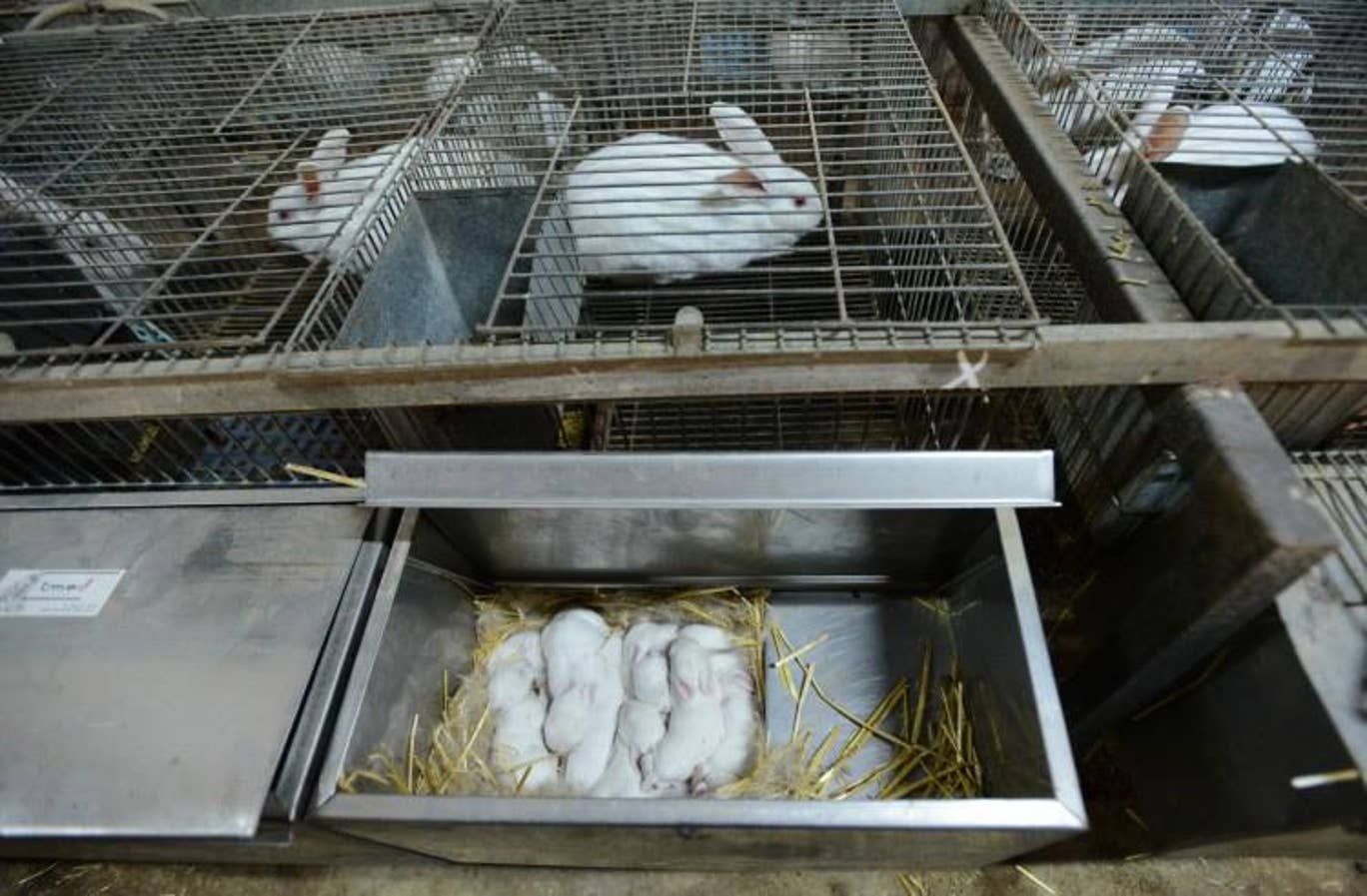 Rabbits and young in breeding cages. 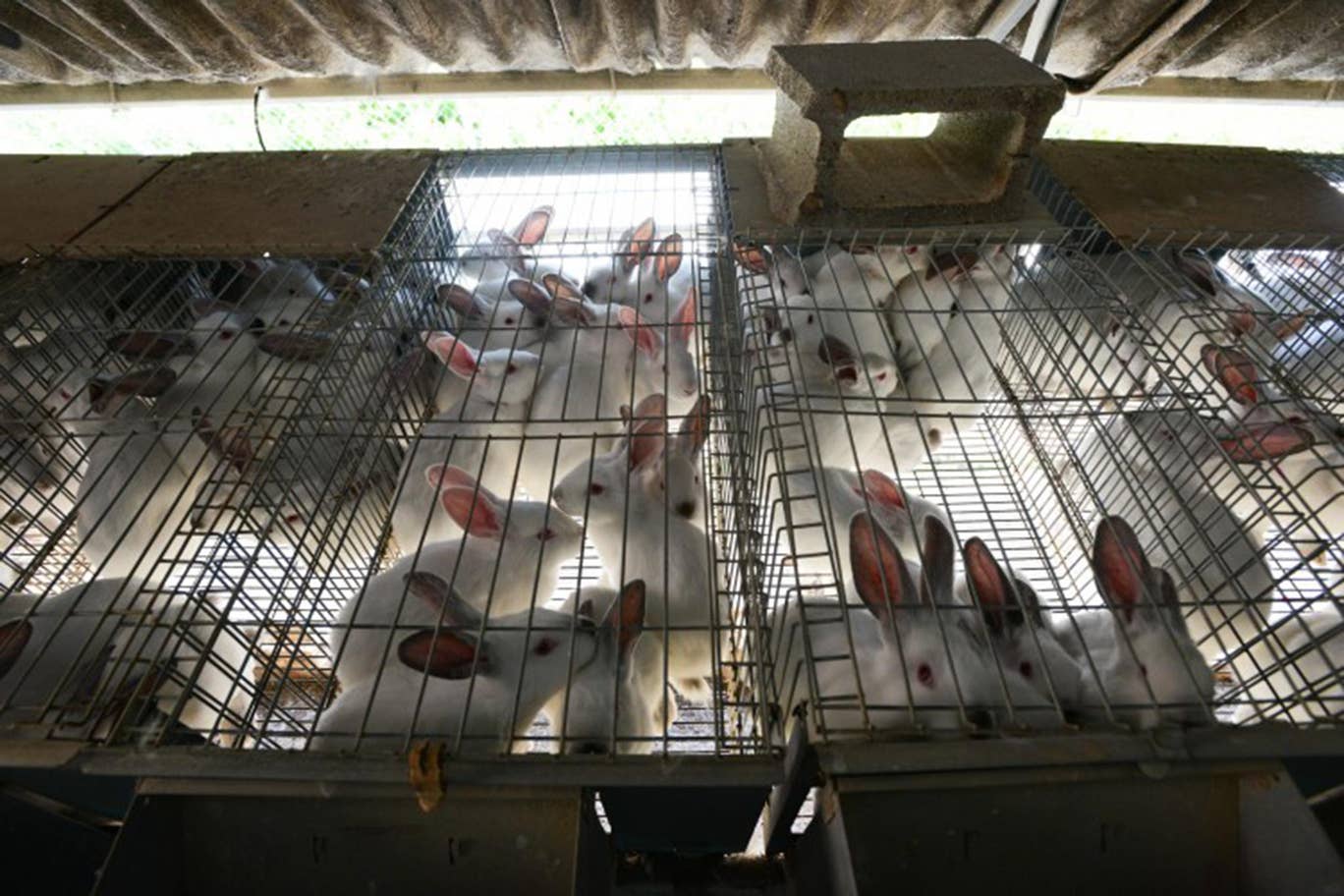 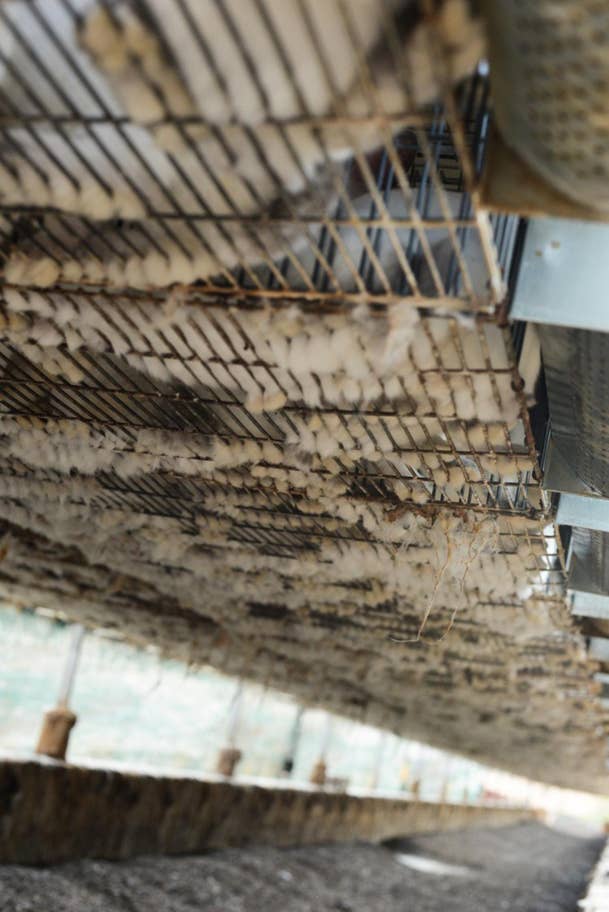 Rabbits in cages above excrement on breeding farm. 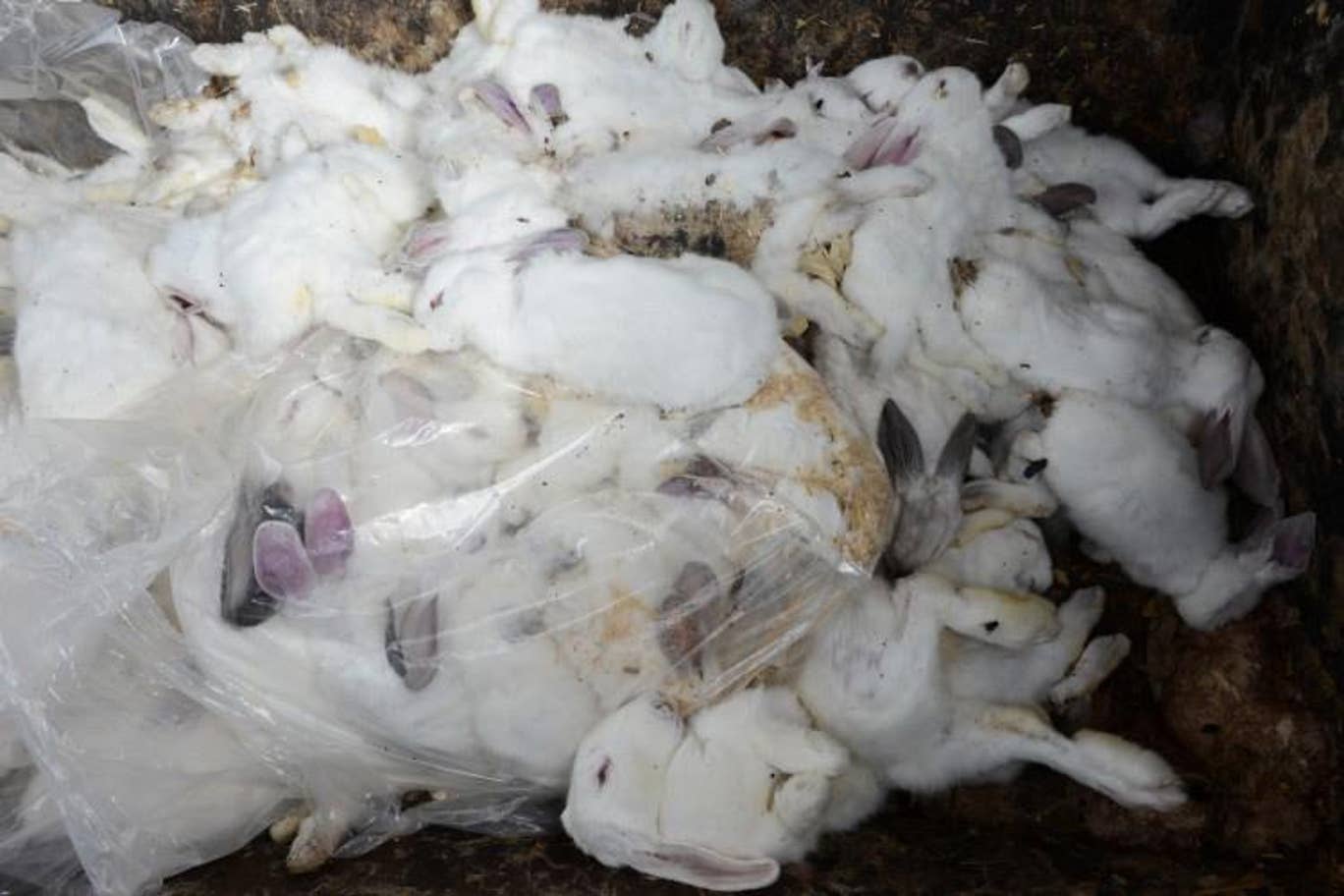 Below – The ‘Masters of Europe’ – those who Enforce the Regulations !!!

Oh no — not above the rabbit excrement pile – I thought you had regulations to prevent that !