Above – an EU official does his usual.

From Mark – This is not going to be short – but I will aim to keep it that way if possible.

Now that we are covering a lot at present with regard live animal exports; I have decided to go public with some work which I did back in 2012 regarding live British sheep being exported by Dutchman ‘Onderwater’ on his ship, the ‘Joline’.

Above – A sheep carrying sealed box trailer boards the ‘Joline’.

The main issue of this report which I produced was to show up (yet again) the complete inconsistencies of the EU and the non adherence to the regulations set in animal transportation protection order EU Regulation 1/2005.

The regulations say that (animal) transporters should be clearly ‘signed’ to alert people that live animals are being carried. Ok, you can see this is not necessary with a ‘normal’ tiered livestock transporter, but with the ‘box’ type transporters which are used in Europe, we enter a different region where the carrying of live animals in a vehicle is not clear at all. This for example, is how Onderwater (the Dutch livestock haulier) deceived the UK authorities by making it look like he was carrying boxed / chilled meat in a ’box’ type animal trailer, when actually it was carrying live animals (sheep).

Read all about it at:

Below – Would you be aware if you were driving on the motorway that this truck is NOT carrying chilled produce, but instead is full of live animals ? 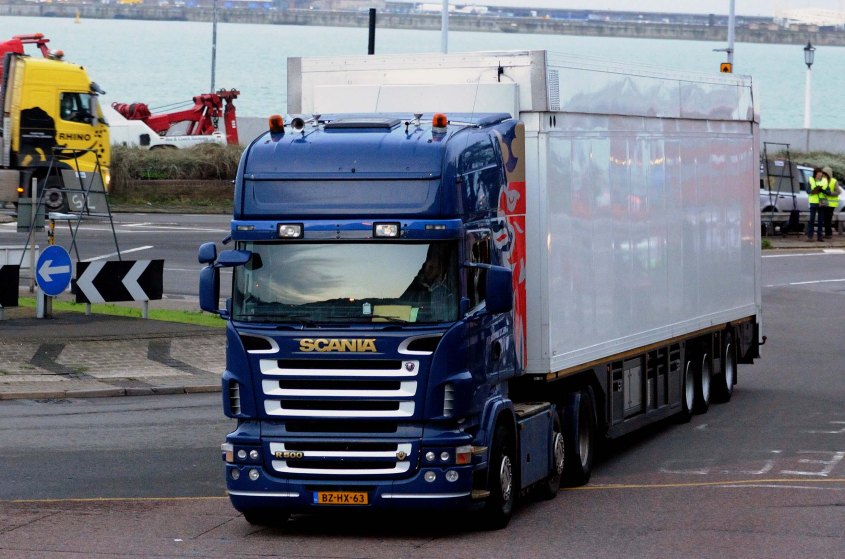 Above – a typical sealed box trailer in the EU – this time full of live sheep.

See my report photographs (taken by friend Valerie Cameron) – Page 4 – which actually show the rear doors of the ‘box’ open and live sheep standing within. 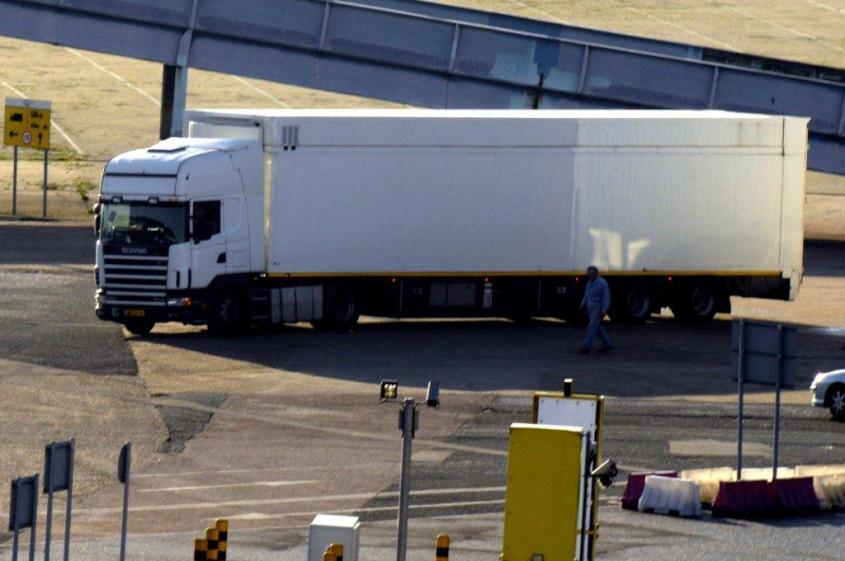 Above – a sheep carrying ‘box’ trailer in the docks, ready to load on ship.

We even gave the EU some suggestion as to how the type of signage which we suggested should be carried on all box type trailers; on the top, bottom, sides and rear. On Page 2 of my report is the example of a sign we gave, written in both English and German; for emergency services to read when applicable.

I put forward my report to the EU on this issue and how we exposed that ‘live animal’ labels were being covered up whilst the vehicle was on the road. My report gives and example and shows exactly how the labelling is covered up; yet can very easily be removed by the driver when he is going to the authorities at a port for inspections.

In their typical way, the EU authorities were fully of words about how things should be done; but when presented with information on how the rules are broken; as detailed in my report; the EU did its normal and turned the other way.  My report shows the EU fancy words which mean nothing.

Cut to now – August 2019; animal carrying but un identified ‘box’ trailers are still being hauled all over the EU. So still, in the event of any accident; emergency services are still completely unaware that live animals are being transported within the trailer. Another issue is access and ventilation. There is obvious lack of access to sick or injured animals in a ‘box’ type trailer so that they can be identified and removed. How can a driver see that animals are ‘ok’ when they are concealed behind the solid walls of a box type trailer ? – and even if he could, which he cannot, how would sick animals be removed from the trailer ?

Livestock carrying trailers have airflow, be it through the tiered vents or via fan systems which are integral to the trailer design. Sealed ‘box’ type trailers have neither. There is usually only a small (30cm) vertical opening at the rear of the trailer through which outside air passes. Is this sufficient for a trailer full of animals ? – I personally think not; but the EU authorities allow it, and seem to turn blind eyes to all the anti evidence provided.

So; here s my report on how very small labelling is covered on the road; and quickly removed by the driver once in port going for inspections. Has anything changed over they years ? – NO. Our labelling system was ignored by the EU, and emergency services attending and incident are still none the wiser if live animals are being carried and may require very quick attendance and help.

For me personally, this again shows how the EU preaches one thing in its Regulations, but does not actually give a damn in reality. It is wrong and unjust; and is exactly the reason why I fight to give animals a voice.

They do not deserve to be abused like this – I wont give up trying to help those who suffer in silence.

all I can say is that I hope this gives an insight into non animal looking trailers that are actually on the roads of Europe but in reality, carrying live animals.

So drivers of Europe, keep an eye out for these – they are not what they may first appear to be.  If you see one involved in an accident; inform emergency services that animals could be on board and need attention.  Do not blame emergency services; blame the EU authorities – who do NOTHING !

Don’t give in without a fight !

4 thoughts on “England: Sealed ‘Box’ Type Animal Trailers – How the Industry Dodges Identifying What They Transport – And the EU Ok’s It !”