WAV Comment – we fully support Animal Equality Italy that has reported its findings (shown in the following video) to the Italian authorities and is calling for the farm to be shut down with immediate effect.  Yes, close it down now !

Trapped inside a filthy cage on an Italian pig farm, Rose lives in utter misery.

She is desperate to be able to comfort her babies. She longs to feel sunlight on her back and soil underneath her feet, but the meat industry denies Rose all of her natural needs.

It’s not just Rose who’s suffering. It’s a similar story for the 300,000 mother pigs on UK farms who are also kept in tiny cages for weeks on end.

Our investigative work has once again exposed what’s really happening inside factory farms, destroying the idyllic image often portrayed by the meat industry.

We urgently need your support to continue to reveal the abuses animals suffer at the hands of this cruel industry – please consider giving today to help us build a better world for animals. 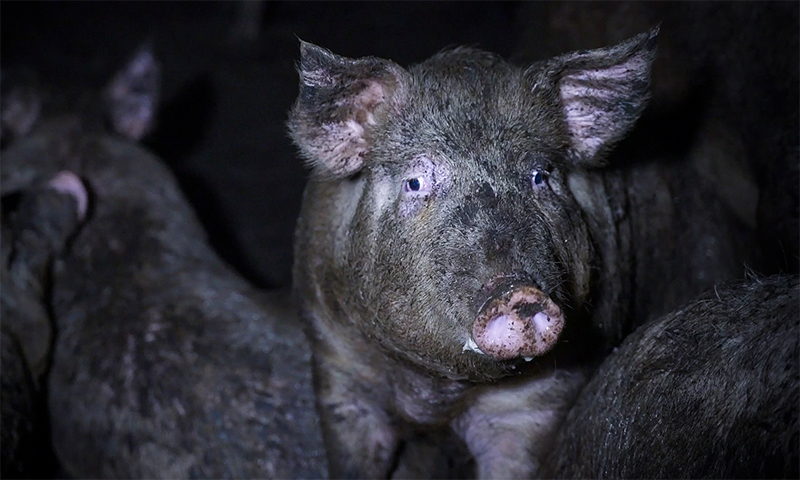 Animal Equality Italy, in collaboration with media outlet Tg2, has exposed deplorable conditions inside a pig farm in the Italian region of Lombardy. Our investigators found thousands of pigs living in filthy sheds, with discarded dead bodies left to decompose.

Our investigators visited the farm multiple times between February and April 2019. Despite Italy’s animal welfare laws, we found distressing cruelty taking place, including:

More than 8 million pigs are bred every year in intensive factory farms in Italy, with almost 4 million in Lombardy alone. Of those, more than 500,000 female pigs are forced to spend weeks at a time between the bars of cages without the ability to move or look after their babies. The UK imports pig meat products from many EU countries, including Italy, to be sold here.

Animal Equality Italy has reported its findings to the authorities and is calling for the farm to be shut down with immediate effect.

Once again our investigative work has exposed the extreme suffering taking place inside factory farms, destroying the idyllic image often portrayed by the meat industry. We need your support to continue to reveal these abuses – please consider donating today to impact the lives of millions of animals.