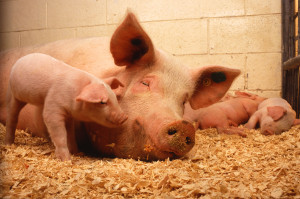 Half a million sows face slaughter annually in Denmark: an estimated half of the country’s total pig population. Of these slaughtered sows, only about 15 percent will be killed because of sickness. Instead, the majority of pigs are seemingly put down because they can no longer pump out enough young piglets to satisfy Denmark’s profit-rich, welfare-impoverished pork market.

This market fuels the agriculture-driven economy of Denmark, and it is heavily subsidized by the government. These heavy investments have led to sows birthing as many as 35 piglets per year. While these numbers soar past global averages, they often prove devastating to the sows’ health and well-being.

Denmark also leads the way in sow mortality rates. Over 10 percent of the animals essentially either drop dead in their pigsties or must be euthanized because they are too incapacitated to function. Even when they do survive this grueling existence, slaughter still awaits the poor sows after they have given birth to two or three litters… and apparently outlived their usefulness. Perhaps worst of all, Denmark’s supposedly ‘superior’ methods for pig production are being ramped up and exported to other countries.

Sign this petition to urge government officials to honour their oath in making animal welfare a central part of this unforgiving, often abusive process.

“I am ready to welcome the aim of producing twice as many pigs in Denmark if we can handle both animal welfare and the environment.” The facts are clear: Denmark has not met the benchmark envisioned by your predecessor. Upwards of 500,000 sows lose their lives prematurely every year because of “fertility” or “mothering” issues. Thousands of others apparently drop dead from the wear and strain imposed on them. In regards to animal welfare, Denmark has not offered much in the way of “handling.”

The “rapid replacement” philosophy not only leaves hundreds of thousands of animals subject to unneeded slaughter, but it also undermines any claims of production efficiency. This country is summarily killing half its pig population every year. In many cases, you discard more than you produce. Humane breeding and production methods may hinder profits in the short-term, but long-term gains would make the commitment more than worthwhile.

Please end rapid replacement breeding and implement human standards for pigs, for the longevity of your agricultural sector and, more importantly, for the health and well-being of these living beings entrusted to your care.