You can endure a lot when you are in love…

A Good night from Venus

Coronavirus deaths in the Netherlands have plummeted. Still, the government has ordered the slaughter of 10,000 captive mink, the first sign of a potential US-style mass cull.

Bred in captivity for their fur, mink are subjected to some appalling conditions throughout their short lives. However, the coronavirus pandemic has introduced a new threat to the lives of these creatures.

After their handlers infected mink on Dutch farms with Covid-19 in April, and after at least two farm workers caught the disease off the mink, the Dutch government ordered 10,000 of the animals to be culled on Wednesday.

Farmworkers in protective clothing will gas the mink en masse before a disposal plant takes care of the bodies and the farms are disinfected (!!!)

In the course of the coming days, all eight affected companies should be cleared. There are still around 150 fur farms in the Netherlands.

From 2024, breeding mink is prohibited after a court decision.

Animal rights activists say the cull should herald the end of fur farming in the Netherlands for good. The country is one of only 24 worldwide that allows mink farming.

However, it’s not just animals in the fur trade that the coronavirus threatens. In the US, sicknesses at meat processing plants forced some facilities to shut down, leaving farmers with no choice but to cull their herds.

Tens of millions of pigs, cattle, and hens have been or will be slaughtered due to the shutdowns.

Moreover, the US recorded its first case of coronavirus in a dog last week.

The disease has been found in tigers, lions, and cats in the US, and early reports of the animal to human transmission in China sparked fears of pet euthanasia and led to hundreds of pet cats and dogs being abandoned in the city of Wuhan in February.

In the Netherlands, coronavirus infections have closed at least three meat processing plants in recent months. While no herds have been culled yet, the idea is not an alien one to Dutch farmers.

More than 100,000 cattle in the country have been culled since 2016 as a result of EU phosphate regulations.

Hopefully, that day won’t come. Daily coronavirus deaths in the Netherlands have plunged to 15 as of Friday, down from a peak of 234 two months earlier.

And I mean…The authority speaks of the evacuation of the fur farms and the gassing of the animals. As if we were in Hitler’s time.

Has the Dutch government never heard of a release?
Even if part of the mink is run over, the rest will live in freedom.
That would be a humane solution.

But because criminal governments provide support to the mass murderers in the animal industry, the 10,000 mink have to fall a victim.

It looks like a financial bankruptcy of this branch in the Netherlands.
Hopefully, the operators commit suicide..

At the moment I am doing a few things in relation to wildlife issues at ‘Jeskyns’; a huge wildlife park very near with masses of tress, ponds and dog walking areas which is owned and protected by Forestry England.

Over the past years, I made a lot of Dormouse boxes (for Jeskyns) in order that we try to encourage / set up a breeding colony in the woodland. The breeding programme has been a real success and I think we are now in the top 10 sites in England for dormouse colonies and breeding.

You can see a bit more here – https://serbiananimalsvoice.com/about-us/   – scroll down a long way until you come to the pictures of all the apples from Jeskyns. Then you will see pictures of some of the dormouse boxes and our first little arrival from 2017; when we first discovered that the boxes were starting to be used for nesting / breeding.

Here are the final 3 boxes which I finished this week, and which have hung around for years unfinished !

Box fronts – the green twine secures the roof – which you unwind and slide the roof horizontally to check if a nest has been made,  Slide back roof into position and re secure.

Asleep in a constructed nest fitted within a box

There are several other pictures of Jeskyns also; including one of the rangers with our Hedgehog houses, which was another construction project.

We are constantly working to do replacement logs for our bee hotel which we constructed several years ago.  Here we are with the first finished hotel.

A pollen covered solitary bee – and new and old logs – note many chambers sealed up with mud – see below.

Bee hotels are easy to make, and you can place them anywhere – places such as Jeskyns; with large orchards; or even in your own back yard for flower pollination. It is primarily ‘solitary bees’ who use the hotel. They are much better pollinators than the traditional honey bees which we all think of. Around 7 solitary bees can pollinate a tree, which would require around 600-700 honey bees to do the same job !

The bee hotel is made up of logs which have been drilled out to produce a series of chambers, or long tunnels. These must vary in width up to about quarter inch (or around 1cm) in diameter. The smallest can be about 2-3mm in diameter. Ideally each chamber or tunnel should be up to about 6 inches or 15cm long; although they can be about 4 inches / 10cm long for narrower chambers.

The solitary bee works from the rear of the chamber forward. At the back; a female egg is laid; along with some pollen for the youngster to feed on when it hatches. Once the egg has been laid, the female bee then blocks up the chamber with some wet mud. It then moves forward towards the front of the log and lays another egg ( also leaving pollen). This time the egg is for a male bee; again the chamber is sealed with mud. The bee then moves further forward and repeats the process; only now; all male eggs are laid.

When they are developed, the male bees work from the front of the log. They break through the mud barrier and fly off. The second bee in the chamber then does the same; followed in turn by all the other males. Eventually, it gets to the female at the back of the chamber. She breaks through her mud wall; goes down the tube until she is free to fly away. All the males that left earlier; wait for her to arrive; then she is impregnated by the males and the whole process starts again; with the female looking for chambers in which to lay her eggs.

Is that not amazing !

Here is a picture of our bee hotel at Jeskyns – you can see the different diameter holes in the logs for the different sized solitary bees.  It has since been made much larger and given a new rain proof roof.

Above is a picture which may help you with understanding the life cycle process.

Give bees a helping hand – go construct a littyle bee hotel for your garden.

My dad was involved with the construction – he is at the hotel – but beware of lovely girl with a hammer in her hand !!:

WAV Comment – with shit like that; really sad that they are part of the British Commonwealth.  Brits try to protect animals, not be assholes like this deadbeat hunter. 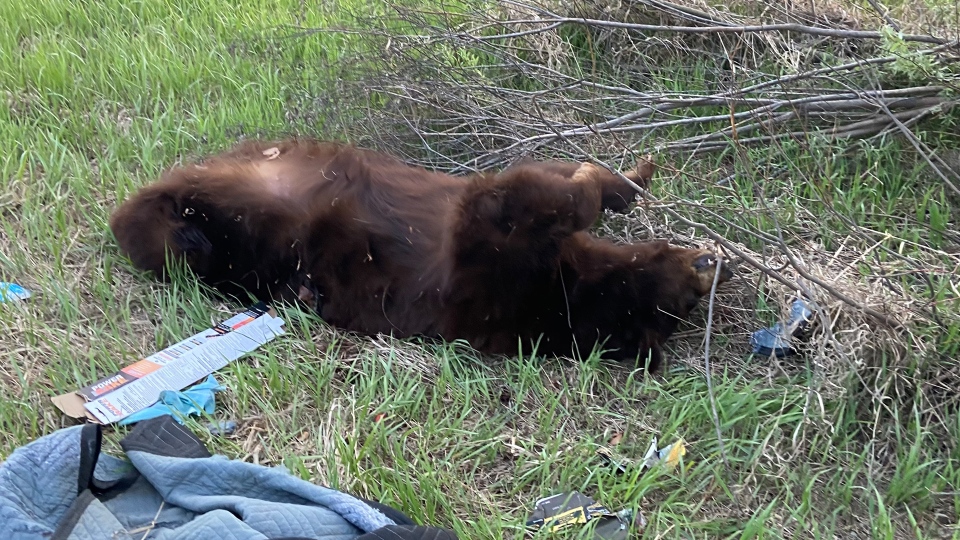 EDMONTON — The body of a black bear was dumped illegally in a ditch near Lloydminster on Sunday, Alberta Fish and Wildlife said.

Officers determined the bear had been shot legally on private land, but that the carcass was improperly disposed of.

The person who shot the bear was ticketed for littering, Fish and Wildlife said.

“Owners or occupants of privately owned land or any person authorized to keep livestock on public land may, without a licence, hunt (but not trap) black bear on such lands, at all times of the year,” a Government of Alberta spokesperson said.

The woman who reported the carcass, Angie Atkinson, says bears are a common sight in the area.

“We’re not that far from the North Saskatchewan River, so there’s lots of ravines,” said Atikinson. “Once in a while, I’ll see scat along the road but they’re just trotting down the road and don’t seem to be much of a problem.”

Officials say animal carcasses should be disposed of at a waste management facility or on private land.