We have mentioned it before, so this is just a reminder.

We also run a ‘sister’ site to WAV which is called ‘Serbian Animals Voice’, or SAV.

This was started in 2005 specifically as a campaign group to be a voice for stray dogs and cats in Serbia, who were, and still are having a very bad time.

If you go to the tab – https://serbiananimalsvoice.com/about-serbian-animals/   you can find out a lot more about Serbian strays; and see how they are abused, by Shinters (or Dogcatchers); and by officials who fail to give the animals they deserve in accordance with existing laws.

The tab   https://serbiananimalsvoice.com/animal-orgs/   provides a quick and easy link to many international; animal welfare organisations; in case you want to check them out and find out more about what they do.

Finally; About Us’   https://serbiananimalsvoice.com/about-us/   provides an insight into some of our past animal work and campaigning experience stories.

In addition there are lots of music videos which you can watch and enjoy; plus links to our wildlife work and our bonsai tree collection. With work which involves so much suffering of animals every day; sometimes you need to get away from it for an hour or so. Bonsai and music are two things which allow this.

All the WAV posts are repeated / updated each day on the SAV site also.

We have a great Archive section for this site which goes back to 2007 and which shows all of our work in the past for Serbian strays.

Enjoy and please visit us at 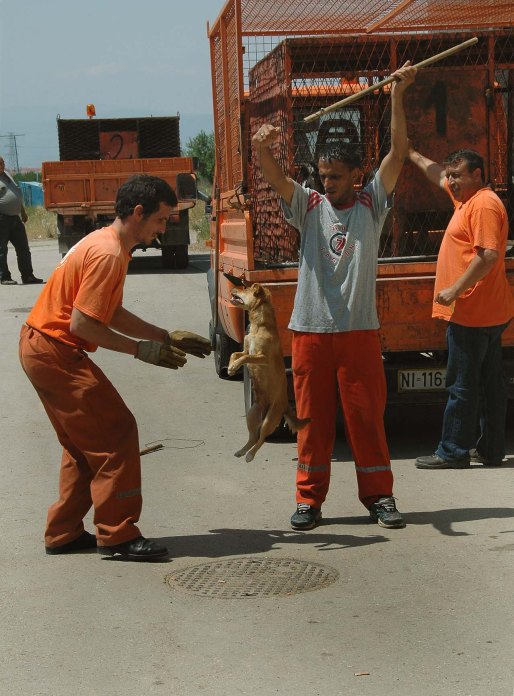 Mother chickens are loving and gentle to their offspring.

Even if only the wind ruffles the fluff of her chicks, the mother hen also becomes restless and shows the same stress symptoms as her offspring, even though she does not feel the wind herself.
The hen feels with her chicks, literally gets her heart racing, and tries to calm the chicks with gentle sounds when a strong wind blows over her chicks.

Every animal has the right to life and freedom.
Protect them and their families.
Don’t be part of their exploitation and let them live.

I am not in the US, but I think I remember him stating that he would kill, or have killed all his animals rather than they go to somebody else. Shows what kind of person this is.  Killing seems to be in his make up ! – Mark.

WYNNEWOOD, Okla. (AP) — A federal judge in Oklahoma has awarded ownership of the zoo made famous in Netflix’s “Tiger King” docuseries to Joe Exotic’s chief rival.

The Florida group was founded by Carole Baskin, who also featured prominently in the hit Netflix series. Maldonado-Passage is currently serving a 22-year federal prison term for killing five tigers and plotting to have Baskin killed.

Baskin previously sued Maldonado-Passage for trademark and copyright infringements and won a $1 million civil judgment against him. Palk’s judgment Monday found that ownership of the zoo was fraudulently transferred to Maldonado-Passage’s mother in an attempt to avoid paying the judgment.

The decision said the zoo animals must be removed from the property within 120 days but it does not detail what should happen to them.

Maldonado-Passage remains incarcerated in Fort Worth, Texas. In a handwritten letter posted Monday on Twitter, he repeated his plea for a presidential pardon. 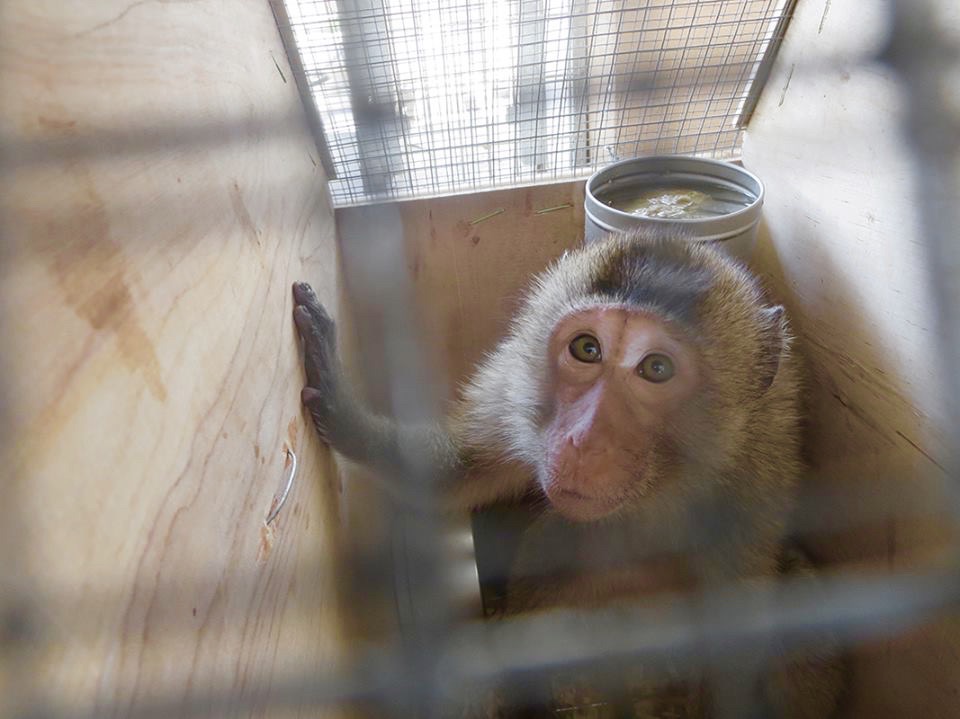 Scroll down for more ways to take action.

Once monkeys arrive in the U.S., they are offloaded from the planes by cargo-handling agents and left trapped in the cramped wooden crates (which are often filled with feces and urine) on the tarmac or loaded with forklifts into a warehouse. These sensitive monkeys must then wait in fear until they’re loaded into trucks and transported to facilities for quarantine. Then they’re moved yet again to laboratories where more horrors await. They’re imprisoned in cramped cages and often cut open, poisoned, crippled, addicted to drugs, shocked, and killed.

We’ve received more reports that Volga-Dnepr Airlines, a Russian airline owned by the Volga-Dnepr Group, allegedly has plans to transport many more monkeys destined for imprisonment and experimentation in U.S. laboratories. But it’s refusing to confirm or deny this. 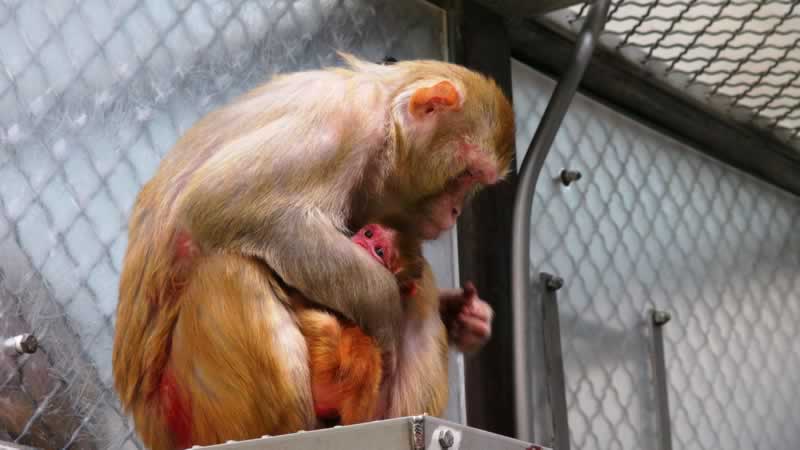 First, urge Volga-Dnepr Airlines to tell the truth and cancel all plans to transport monkeys destined for imprisonment and experimentation in U.S. laboratories! 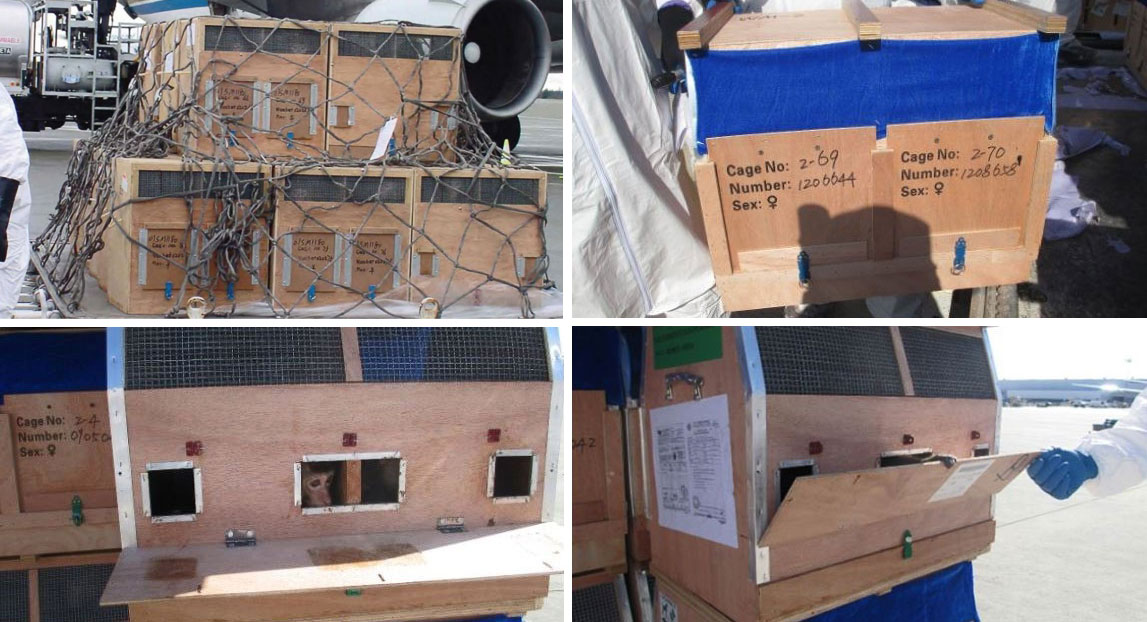 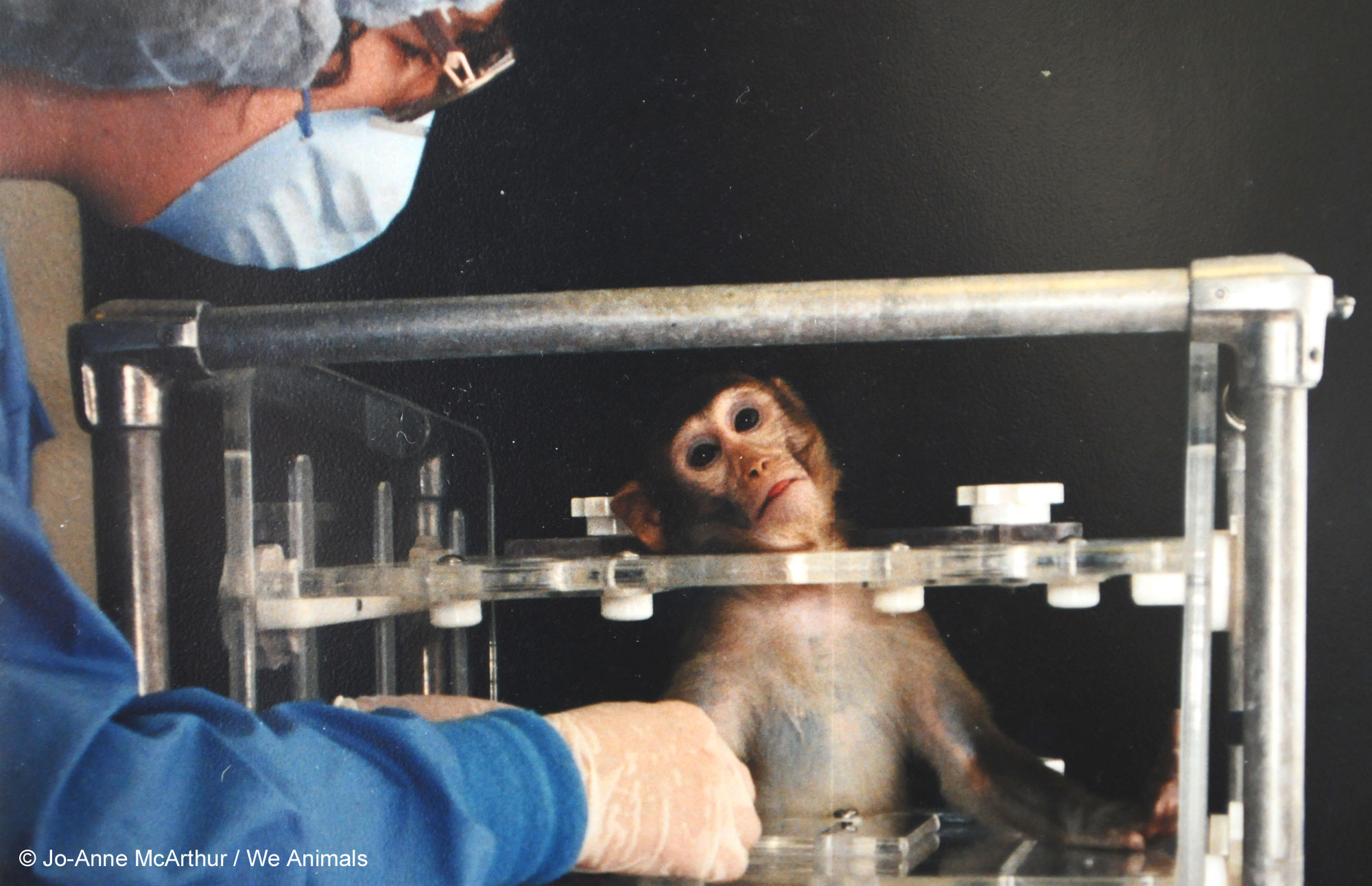 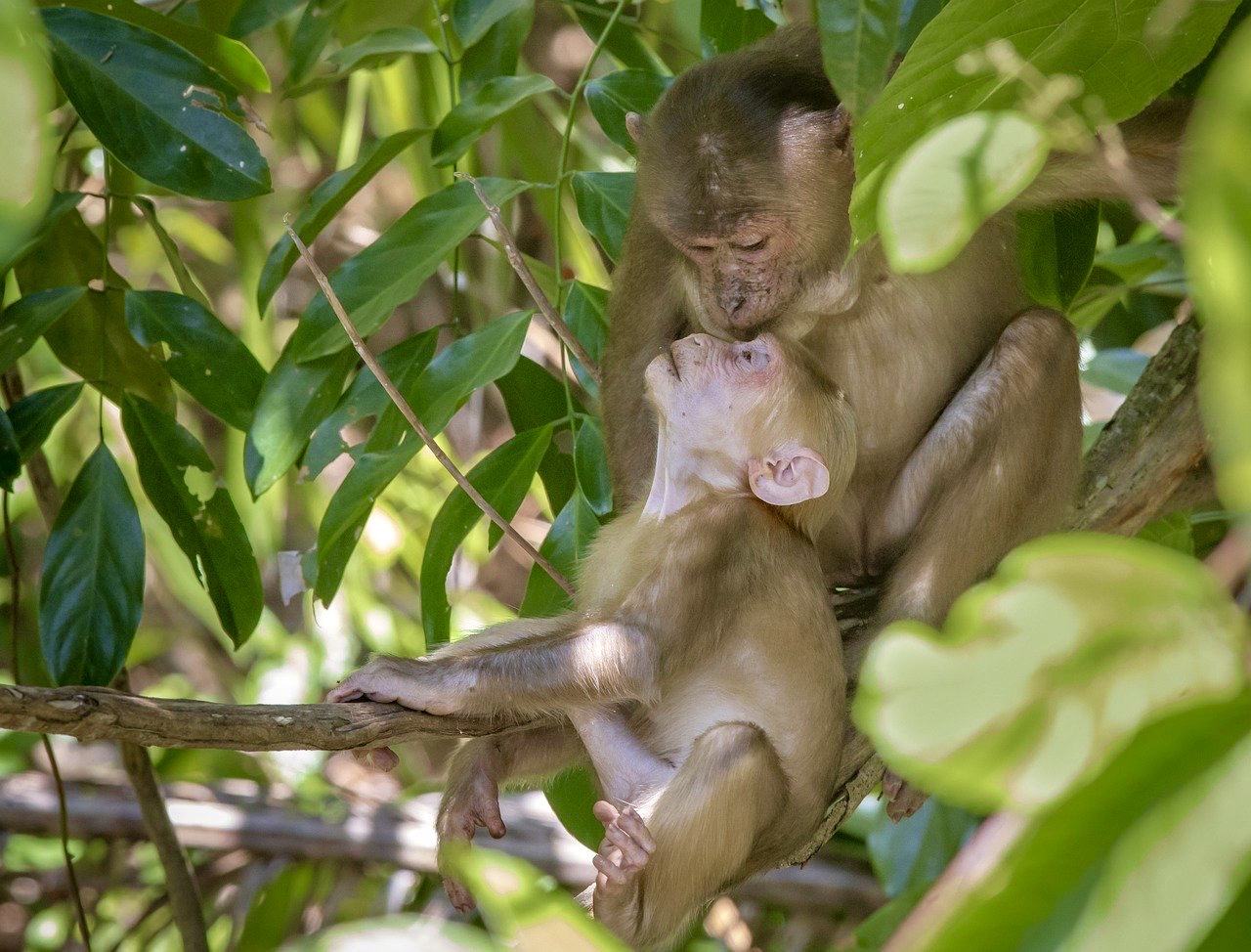 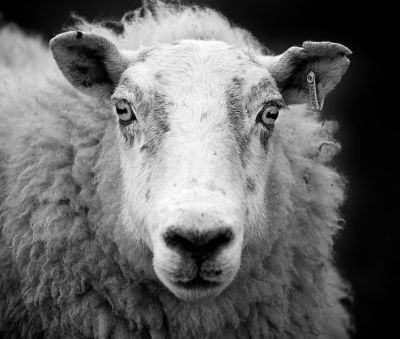 I (Mark) put this new post from Lyn out early on 3/6 to give you the great news from AA about the summer export ban standing.

You can check out our earlier post on this, relating to what it is about, by clicking on

In addition, on this past post I included some old archive information for you to read from October 2018 – regarding Kuwait Livestock and Trading (KLTT) and its Australian subsidiary, Rural Export Trading WA (RETWA), who made this special appeal to continue shipping in the Summer months.

We immediately sent a message of solidarity to our campaigner friends at Animals Australia last week; both of us united in the fight against this disgusting trade; and on 1/6 we had a super message back from Jacqui at AA thanking for being united in support with them. As you can see below, the fight on this particular has paid off and the sheep will not suffer enduring weeks of heat stress on a ship destined for the Middle East.

We want to congratulate AA for fighting the fight so hard, as they always do.

As Lyn (at AA) says, “sadly there will be no ‘happy ending’ for these sheep who will now go to local slaughterhouses in Western Australia. However, they have been spared the extended and extreme suffering of weeks at sea where the risk of ‘cooking alive’ from heat stress is very real. And they will also now not face painful fully-conscious slaughter”.

To resolve all these issues, we suggest going over to a meat free, plant based diet. End the suffering and killing and do yourself some good also. Vote with your stomach !

Thanks to all of you who took action here; and thanks to the Department of Agriculture in Australia who were torn between to sides; but who in the end listened to the people and made the very right decision.

Late last night we received official word from the Department of Agriculture that 56,000 sheep will NOT be sent into the blistering heat of the Middle East summer.

A decision to allow this shipment would not only have subjected animals to extreme and extended suffering, it would also have required an exemption to new laws that prohibit dangerous summer shipments.

I know that, like me, you’ll be breathing a tremendous sigh of relief. It’s been an intense but uplifting few days observing people turn their compassion for these sheep into effective action on their behalf.

Over the last week, we worked every angle and played every strategic card we could to present the strongest possible case to prevent these sheep from being exported. From legal avenues, close consultation and advice to the Department of Agriculture, and media coverage. But perhaps most critical of all was the analysis we instigated from an expert climatologist that warned, if the ship set sail, it would be sending animals directly into the ‘danger zone’ for heat stress. We worked day and night to ensure the regulator had all of the facts in front of her to make the right decision — and she did!

The live export industry has been sent a very strong message: they are no longer above the law.
They can no longer expect to ‘call the shots’.
We are mightily relieved that this decision has been made. It is so very important that precious laws instigated to protect vulnerable animals are upheld, and we are grateful that the regulator has put the interests of animals ahead of the interests of live exporters.

Sadly, there will be no ‘happy ending’ for these sheep who will now go to local slaughterhouses in Western Australia. However, they have been spared the extended and extreme suffering of weeks at sea where the risk of ‘cooking alive’ from heat stress is very real. And they will also now not face painful fully-conscious slaughter.

With heartfelt sincerity, I say thank you for never failing to heed the call for help whenever animals need it. Your support has given these animals a voice and the representation they so desperately needed.

In many French departments, since June 1, 2020, it is possible for hunters to shoot on sight boars, roe deer, foxes and even deer.
For hunters, the desire to kill cannot seem to wait for the end of summer!
Now it is the season of births.

Many “bambi” like this will become orphans and die. Indeed when he is not old enough to flee and in case of danger, “bambi” flattens on the ground while waiting for his mother to return

And I mean…Hunters are terrorists, killers, and liars!

That this biological dung construct still exists is due to the support of some (hunters) politicians, and to a cowardly society that keeps the hunting terror in the forest and nature alive with its silence.

But the time of intimidation and lies, the time of the psychopath gang that thinks they can do what they want in the forest, is finally over.

Hunters! Shoot yourself and your stupid political followers immediately with you.