My neighbor works again so I take care of the little ones.

Related WAV posts on this issue:

Great news on our Judicial Review of British calf exports. The Scottish Government’s outrageous request for an indefinite delay has been REJECTED!

The Court of Session has, instead, chosen to double the court time available for our case – and the hearing is now expected to take place in October.

The battle against cruelty isn’t over yet, but we’ve secured a first, big victory. A huge thank you to everyone who has backed this campaign so far. If you haven’t already done so, please:

Thank you! Together, we will keep up the fight for #JusticeForCalves.

STUCK ON A TRUCK

Every year, thousands of unweaned calves are sent from Scotland to fattening farms in Spain. These vulnerable, young ‘by products’ of the dairy industry suffer journeys that are both horrific and, we believe, illegal.

Animal transport law states that unweaned calves cannot travel for more than 8 hours – unless, after a maximum of 9 hours’ transport, they are rested, given water and, “if necessary”, fed.

In reality, the ‘rest’ usually just means the lorry stops moving for an hour. And, because milk substitute can’t in practice be provided on the trucks, calves may go as long as 23 hours without food. They must be stressed, exhausted, and desperately hungry.

Whilst they’re on British farms, these young animals must legally be fed twice a day. Yet the transporters think it’s not ‘necessary’ to feed them until they’re first unloaded in Northern France!

We have always known that live calf transport does not adhere to the EU rules which allegedly ‘protects’ animals in transport.

You can read and see a lot more in relation to this by visiting, and scrolling down at:

Or,  If you care to click on the following link below you will see a written summary of just 1 of the 5 trails which was undertaken and clearly proved that Irish calves were not being given adequate food and rest at an approved Staging Post facility after they had made the crossing from Ireland to France.

Remember, this (link below) is just 1 of the 5 investigation reports that we produced in our ‘overall’ document of 2010;

and it also lists all the non compliances with the EU Regulation 1/2005 for this specific trail / investigation are given at the end of this specific investigation report.  Remember also that these investigations and reports do not just appear by magic.  Many people, their time, money and several vehicles are often involved – they all take effort and time to record all the exact details which you can see detailed in the report.

Thus, it can be annoying in the least when all this work is undertaken, compiled and presented to the EU, and then they do nothing about it ! – something is wrong somewhere; hence our gripes as detailed in many current posts re live animal transport and the EU ignorance.  This is typical of the work involved to ‘do the trail / investigation job’ properly; and when you do and then get completely ignored at EU level you begin to ask questions about those same people and the EU ‘organisation’ who are supposed to be ‘enforcing’ the ‘animal welfare’ regulations.

For the Calves –  Regards Mark

Hundreds of new corona cases were registered this week in a slaughterhouse of the Tönnies company in Germany.

At the Tönnies headquarters in Rheda-Wiedenbrück, around 5,300 employees will have to be tested in the next few days.
As a result, all schools and daycare centers in the Gütersloh district were closed again. Around 7,000 people are now in quarantine around the company.

For him, one of the main problems in the industry is that work in slaughterhouses is increasingly done with employment contracts and subcontractors, so that workers, most of whom are from Eastern Europe, are “not treated fairly”.

He now wants to end this “basic evil”, said Heil in the state television channel ARD.
But is that it?
The meat industry has other problem areas:

But where to put the manure? A large part of it ends up in the meadows and fields of farmers – and thus contaminates soil and groundwater with nitrogen.
Agriculture is responsible for around 57 percent of the nitrogen that is released into the environment in Germany, according to the Federal Environment Agency.

END_OF_DOCUMENT_TOKEN_TO_BE_REPLACED

Vietnam – Bear ‘Cotton Blossom’ Will be rescued tomorrow from her terrible suffering life of bile farming.

Rescue team are finally on their way after earlier preventions due to Covid.

We are hoping to set up a live link to the rescue very soon – and will give details when we can.

We’ve finally received the go-ahead to rescue a lonely moon bear in desperate need of love and care. Our emergency response team are on their way right now.

We were first alerted to her plight back in March. But due to the Covid-19 outbreak causing widespread travel restrictions in Vietnam, and this poor bear being held in the border region of Gia Lai province, over 700 miles away from our sanctuary, we couldn’t reach her.

But we didn’t forget. And we’ve been preparing for her arrival ever since. Her house has been cleaned, her bed made and a delicious feast is being prepared for arrival. But that’s not all…

Back in March, the spring sunshine was warming the air, and the magnificent red cotton blossoms were blooming. Though we couldn’t rush to her aid there and then, we remained hopeful that her many years of darkness were coming to an end and she would soon blossom at our life-saving sanctuary. To mark her eventual arrival we planted a Cotton Blossom tree. And in honour of the bear you’ll help us rescue, we’ve named her Cotton Blossom.

Currently, we know precious little about her. What we do know is that she’s been forced to endure painful bile extraction and we can almost be sure that she’ll have serious health issues as a consequence.

She’ll need special ongoing care and treatment for the rest of her life. Which we hope could be another 15 years or more. Hopefully, with enough love and time, all of the pain, anger and fear she feels will fade into distant memories.

In these dark times, will you be the ray of sunshine she’s been waiting for? You can help this sweet girl on the road to recovery and beyond by making a donation today.

Our rescue team plans to arrive tomorrow morning. In the meantime, we’ll do our very best to keep you updated, and I hope to bring you more information soon. For live updates, and to see your kindness in action, please be sure to follow us on Facebook, Twitter and Instagram.

As always, thank you from the bottom of my heart for being there for Asia’s animals when they need you most.

With bear hugs of gratitude and of hope,

PS It takes a lifetime of care to help rebuild a broken bear.

Please will you help Cotton Blossom begin her long road to recovery with a healing gift today?

Thank you so much for caring.

Louisville Zoo, Kuntacky, USA, continues to hold three elephants captive in a cramped exhibit. A mother elephant, her young calf, and their one companion named Punch — all held in a cramped enclosure in order to generate profits from paying customers. 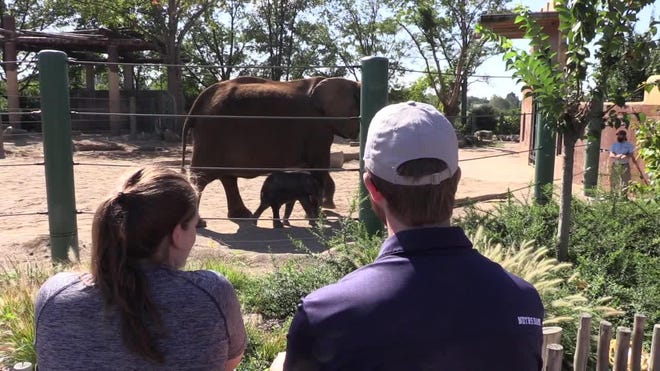 Elephants are naturally evolved to live within close-knit herds and to enjoy endless space in which to roam. Louisville Zoo is falling short when it comes to giving these elephants the lives they deserve.

Like his mother, Mikki, and cell-mate Punch—who were both taken from the wild—Fitz will be robbed of the relationships he would naturally form with other elephants including other family members near his own age.