Roquefort is produced from sheep’s milk. To produce this milk, the sheep must give birth to one or two young each year. Thus, more than 500,000 lambs are born each year for the production of Roquefort. In excess, three-quarters of them are sent to intensive farms where they will be fattened for meat. As is the case in this Aveyron farm, SARL Grimal, one of the largest farms in France.

The lambs are crammed into pens without access to the outside. Some are dying slowly in the farm and die before reaching 4 months when they are sent to the slaughterhouse. 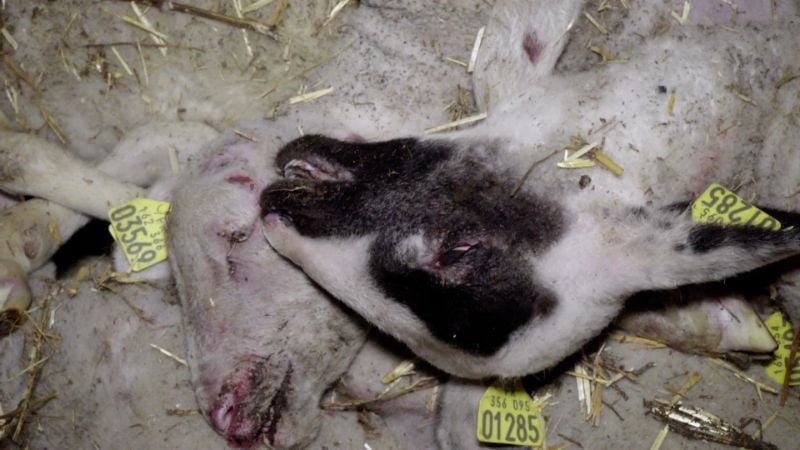 Some of these lambs were killed at the Arcadie Sud-Ouest slaughterhouse near Rodez. Some receive electric shocks that are thought to numb them and cause a heart attack.

Here, the process is not controlled by the employees, so that animals receive the shock without being dizzy. Others are slaughtered alive. Lambs see each other die.

Many are still hanging on the slaughter line.

These serious offenses had already been noted in a veterinary report in 2016. Four years later, nothing has changed. Let us demand the closure of this slaughterhouse. 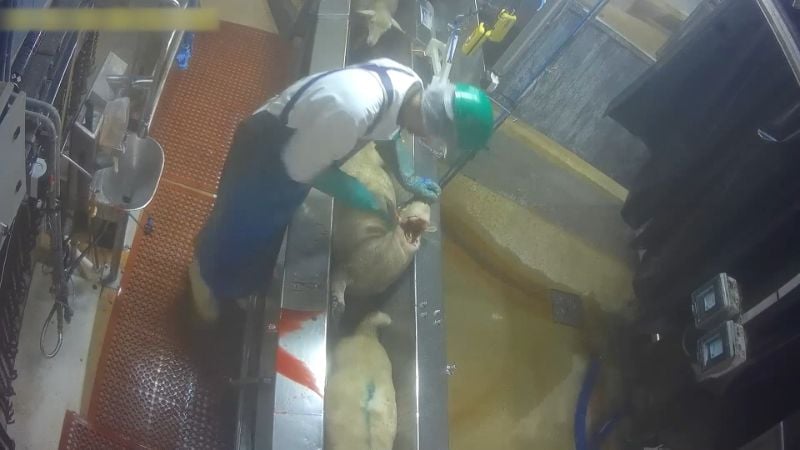 Already in 2016, the practices of killing animals at the South West Arcadia slaughterhouse were disastrous. A detailed veterinary inspection had confirmed several “major non-conformities”.

In particular, the report reads that animals see those who precede them die because of a “lack of masking curtain at the killing post”, and that they are “systematically hoisted conscious”.

The slaughterhouse is given the worst assessment: “major non-compliance” for the killing of animals!

No protection for 3/4 of the “Roquefort” lambs

END_OF_DOCUMENT_TOKEN_TO_BE_REPLACED

Juliet and the crew at Viva !   have now undertaken another major investigation – this time pigs at Morrisons.   For our non UK visitors; we are fortunately not talking Australian PM here; but a UK supermarket chain; probably in the top 5 in the UK. You can see from this link how many stores they have: https://my.morrisons.com/storefinder/

The following is copied directly, without amendment; from Viva !:

Or here is the wording:

The investigations took place over the course of three weeks, using hidden cameras to reveal atrocities both inside and outside the farms’ sheds.

and see the video footage.

Each newborn piglet is pulled from the farrowing crate and ruthlessly thrown into a metal trough. Investigators captured workers using a barbaric hot knife to slice the piglets’ tails back to a bleeding stump and a pair of pliers to clip away their teeth – all without pain relief.

These cruel acts are supposed to prevent tail biting, a behaviour that manifests from distress and lack of stimulation.

One of the most distressing scenes captured by Viva! Campaigns shows a farm worker ‘knocking’ young piglets – killing them by slamming their tiny heads onto the concrete floor.

It’s a brutally cruel act, which is followed by the worker dumping the bodies aside – presumably because these animals were considered too small to be profitable.

As if all this wasn’t bad enough, our team also stumbled upon the farm’s incinerator in an open-ended shed. Most days there were piles of dead piglets – some in empty feed sacks, others dumped on the ashes from previous burns – discarded like rubbish. The door had been left wide open. Next to the shed there were more dead piglets awaiting their turn to burn, writhing in maggots.

One of the most distressing scenes captured by Viva! Campaigns shows a farm worker ‘knocking’ young piglets – killing them by slamming their tiny heads onto the concrete floor.

It’s a brutally cruel act, which is followed by the worker dumping the bodies aside – presumably because these animals were considered too small to be profitable.

These practices are in complete violation of the government’s guidance on how to handle ‘fallen stock’, which states: ‘While waiting for your fallen stock to be collected, you must ensure that animals and birds cannot access the carcase.’

How you can help

Your funds not only provide us with vital equipment to carry out investigations but also the budgets to launch major publicity stunts and campaigns:

We know times are tough and as ever we appreciate every contribution made, no matter the size. Mark, together we will end factory farming, before it ends us!

Yours for the animals

The 10-day annual festival in the southwestern city of Yulin usually attracts thousands of visitors. Cat meat, fresh lychees and liquor are also sold at the festival. It began in 2009 to mark the summer solstice. Eating dog meat in the summer months is traditionally believed to be good for health.

It can ward off diseases and increase sexual performance in men, according to some. The custom can be traced back at least 400 years in China and around 10-20 million dogs are killed every year for consumption.

In Fight to Ban Dog Meat, China’s Activists Find an Ally: The Coronavirus

GRAPHIC WARNING: CHINA’s notorious dog meat festival has opened in defiance of a government campaign to improve animal welfare and reduce risks to health highlighted by the coronavirus outbreak, but activists are hopeful its days are numbered.

WAV Comment – up to 5 years imprisonment and an unlimited fine – well done Scotland (UK) for sending the clear message out that animal abuse will not be accepted. Lets hope this policy (and punishments) are adopted in many other places !

Scotland will have the toughest penalties for animal cruelty in the UK – thanks to a new Bill passed in Parliament this week.

And Finn’s Law will also give new legal protections for service animals such as police dogs and horses, removing a legal defence of self-defence for attacks on service animals in the course of their duties.

The Animals and Wildlife (Scotland) Bill will increase the maximum penalty for the worst animal cruelty crimes to five years imprisonment and an unlimited fine.

Animal welfare enforcement agencies will also be given innovative new powers, allowing animals taken into their care to be quickly rehomed – without the need for a court order.

Mairi Gougeon, Rural Affairs Minister, said: “This Bill is an important milestone in Scotland’s long tradition of protecting our animals and wildlife.

“The increased maximum available penalties reflect the seriousness of some of the very cruel crimes seen against domestic and wild animals, although these cases are, thankfully, rare.

“Finn’s Law, named after a police dog brutally injured in the course of its duties, recognises the important role service animals play in protecting us in sometimes very difficult circumstances.

“The Bill also provides new powers, described as ‘transformative’ by the SSPCA, that will allow animal welfare enforcement agencies to quickly rehome animals in their care.”

The Scottish Society for the Prevention of Cruelty to Animals welcomed the government’s decision.

Scotland’s animal welfare charity, which is reponsible for investigating animal cruelty and rehoming animals seized on welfare grounds, said the law will be game-changing for both animals and the organisation.

Continue reading the full story at:

WAV Comment — we have heard this morning (24/6/20) that there are currently 56 actions against SeaWorld by companies who are trying to get their money back.  Not confirmed, but we have found the following.

SeaWorld raises cash to stay afloat but can it survive prolonged park closures due to coronavirus?

In a move to shore up its finances during a pandemic that last month forced it to shut down its 12 theme parks, SeaWorld Entertainment announced Tuesday it is raising $227.5 million through a private offering that it can use to help pay its bills.

While the company reported it had seen record attendance and revenue during January and February of this year, the good news quickly soured the following month when it closed all its parks on March 16 and later furloughed 95 percent of its workers starting the first of this month.

Read more at the link above.

As SeaWorld Parks remain closed because of COVID-19, the company has taken proactive financial steps to protect its customers, employees and animals.

SeaWorld Entertainment has taken financial steps in response to lockdown measures that are still in place accross America. Interim CEO, Marc Swanson, said that the steps they have taken “will provide us with significant financial flexibility and liquidity to operate in this unprecedented and highly uncertain environment.”

Seaworld Entertainment has reduced its executive officers’s base salary by 20% until its theme parks resume normal operations. Furthermore, the company has substantially reduced its marketing and advertising spending.

Marc G. Swanson serving as interim CEO at least through reopening of parks

ORLANDO, Fla. – SeaWorld has named a temporary chief executive officer following the resignation of Sergio D. Rivera, according to the news release.

Rivera, the most recent chief executive officer of SeaWorld Entertainment, Inc. notified the company of his decision to resign last week, days after SeaWorld announced 90% of employees would be furloughed amid closures due to the coronavirus pandemic. Company officials said Rivera also stepped down from his duties as a member of the company’s board of directors.

According to the release, Rivera said his resignation was due to disagreements over the board’s involvement in the decision making at SeaWorld.

Rivera was on the job for less than five months.

Read the full article via the above link.

For a good start to the day!

After the coronavirus outbreaks in Dutch mink farms, all of this type of farm in the country should, according to the will of Parliament, be closed by the end of the year.

A corresponding proposal from the Social Democrats and the Party for Animals was passed yesterday.
The Parliament also called on the government to ban the breeding of animals “susceptible” to the coronavirus.

The Dutch authorities had more than 1,500 minks killed in the past few weeks after the virus appeared in nine farms. At least two employees of the farms contracted the pathogen.
The authorities assume that the virus has been transmitted from the mink to the employees.

According to the animal welfare organization Humane Society International, there are currently 128 mink farms in the Netherlands. The breeding of mink fur was fiercely controversial in the country even before the virus broke out.

My comment…And since we have failed miserably as a species, we would like to thank the pandemics for intervening and perhaps doing what we are currently not able to do – namely abolish fur farms.

It would be optimal to abolish the torture farms of ALL breeding animals, and the current mass infections in slaughterhouses can be a good start in this direction.

Over the years we have learned to be patient and therefore we look forward to small successes too.