Hunters like to call themselves conservationists and often claim that they take care of nature and the animals in their territory. The fact that hunters kill wild animals is inherently contradictory – but did you know that animals are even bred specifically for hunting and then released so that hunters can shoot them as live targets during hunts?

Pheasants offered on eBay for 10 euros to kill

This is common practice when hunting pheasants, ducks, and partridges.
Hunters buy the animals and release them to kill before hunting. For example, pheasants can be bought for 10 to 20 euros on eBay or in pheasant shops, where thousands of them are bred in a confined space.

On some websites, the animals are offered depending on the season at a unit price of 10 to 14 euros. Even more macabre: When purchasing larger quantities, there is often a discount of up to 50%.

What is the so-called “cherish”:
So that not too tame animals are killed during the hunt, the respective state hunting laws stipulated the deadline before which the animals must be released. For this purpose, hundreds of ducks and other birds are often released specifically to waters.

So that they stay there until the start of the hunt, it is allowed to feed them. The attached feed and the droppings of the numerous birds often damage the water sustainably.

In addition, the animals that are accustomed to being raised by humans continue to be tame from feeding and run unsuspectingly towards their murderers while hunting.

Fear of death while the “drift and pressure” hunt.

During the “Drift and pressure hunts,” the animals are pursued by drivers and hunting dogs in front of the shotguns and rifles of the hunters.
The animals flee in panic for their lives – often via streets and through settlements.

Game accidents during hunting are unfortunately not uncommon and can be fatal to those involved, particularly due to large wild animals such as wild boars.

It also often happens that animals are shot but not immediately killed.
They then flee in panic, with gunshot wounds on the body or on the wings, until they succumb to their injuries and die after several days of agony.

Hunting is not nature conservation

The targeted release of animals for shooting shows that hunting has nothing to do with nature conservation.
On the contrary – the ecosystem is being completely confused.

Renowned wild biologists confirmed many years ago that hunting is not suitable for regulating wild animal populations, but is counterproductive.

Studies show that hunting leads to earlier sexual maturity in wild animals.
In hunted areas, the population grows faster, as wild animals compensate for the death rate with stronger births in the next generations and, moreover, more individuals take part in reproduction than usual.

On the other hand, natural regulation of wild animal populations takes place through environmental influences such as weather, food availability, or diseases.

Areas like the Swiss canton of Geneva, where hobby hunting has been banned for over 40 years, clearly show that nature regulates itself.

And I mean…EVERYTHING that hunters do, no matter what they say and what they actually do, serves only ONE goal:  to preserve the hunt!
Hunting is a murderous hobby. No more, no less!

NO hunter in Europe has been forced to hunt.
Especially here in Germany, nobody is forced to lease a hunting ground and no one is forced to take part in a hunt for a fee.
Those who hunt kill for pure pleasure.

What state of mind can I expect from someone who cowardly shoots an animal from the ambush while it is eating, although he does not need his flesh and skin for life at all and then he calls it  “hobby”, “nature conservation”, “species protection”, “disease protection” or “tradition”?

So if a hunter stands here and claims to be a conservationist, he is lying.
Hunters want to kill. No more and no less! 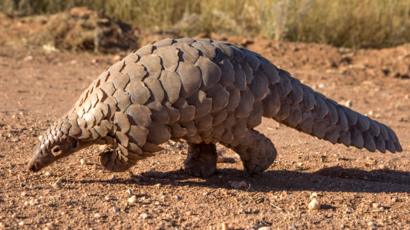 WAV Comment – we did a post about the Pangolin a few months ago – you can read it here:

In a hopeful step toward protecting wild animals and public health, China has removed the endangered pangolin from its official list of traditional medicines. The decision comes days after the country’s State Forestry and Grassland Administration (SFGA) increased the pangolin’s protection status to the highest possible level because of the creatures’ dwindling population.

Pangolins are the world’s most heavily-trafficked animal with around 200,000 poached annually. Their scales are extremely valuable in China’s lucrative black market due to their supposed medicinal qualities, despite scientists affirming that there is currently no known medical benefit.

Holding pangolins captive could be dangerous to human health, as well. Some researchers think the coronavirus may have transmitted to its first human host via a pangolin. More generally, the ongoing global COVID-19 crisis is thought to have originated at a ‘wet market’ in Wuhan, China, drawing widespread attention to the dangers of the live animal trade, which unavoidably brings humans and animals within unnaturally close proximity.

China’s decision to upgrade pangolins’ protection status and remove them from its list of traditional medicines is the latest in a series of legislative moves responding to the current pandemic, including a nationwide ban on the wild animal trade and the government offering to buy out wild animal farmers and transition to plant-based farming.

This is a monumental step in a more humane direction, but truly ending the cruel pangolin trade, which continues despite the ban, remains an uphill battle. Lady Freethinker applauds China’s efforts, but more must be done to protect these innocent creatures.

“A meeting – people who individually can do nothing; and together, decide that nothing can be done” !!   – Mark (WAV).

Good to see at least that Andrea (Gavinelli); one head of unit at DG SANTE is going to be speaking at this event. I used to send Andrea a lot of letters and info when I was EU correspondent for a English live export campaign group in the more recent past.

Andrea is a good man and I always found him to be supportive of our work to stop live animal transport. Although he is now a head of unit; he sadly still comes under the control of Bernard (I can do nothing) Van Goethem. We hope that in the 15 minutes allocated to Mr Gavinelli to speak; regarding Animal welfare within the ‘Farm to Fork’ strategy, he will push for a reduction / ban on the transport on live animals within the EU

As we have shown in very recent posts; if South Africa and Australia can take action on the issue of live animal transport; then the EU can do the same. As with most EU issues, there is a mafia type control (the meat mafia) which prevents the wishes of EU citizens coming into force.

It is sad when an organisation such as the EU, which claims to ‘represent the people’; does exactly the opposite and in reality, represents only the mafia style operators who wish to see live animal transport continue. There has been a ‘crisis’ in live animal transport within the EU for years – and its head (Van Goethem) does nothing about the crisis; he simply holds his hands up and says ‘I can do nothing’.

This Tuesday morning, on the N17-1 road, near the exit to the Industrial Area of ​​Alto do Padrão (between Miranda do Corvo and Lousã), a truck carrying pigs to the slaughterhouse collapsed, having been in the situation that you can see in the video. The driver of the vehicle, we found, was not injured.
But the animals it carried, yes.
We were unable to provide support as the road was closed.
But we managed to register some images so that everyone can see and hear the suffering of these animals.

According to the information that arrived at the site, about 100 animals died.
But that was not all we found: the scene was of many dead pigs, but even more pigs in agony. Bleeding, with broken legs, with a broken spine, dying … an authentic Dante scene.

We also caught the moment when a guy repeatedly kicks a pig, so that it does not move away from the place where his brothers perished.

Probably for the first time in his short life, two surviving pigs could feel the fresh grass. They were able to taste it. They had a few minutes of freedom. But that freedom will be robbed of them again because even the survivors will not escape the destiny that already awaited them: death.

At the site, passersby talked about “wasting food”, “still serving for food”, but only one person showed compassion for the suffering he was witnessing.
And we wonder … where is our empathy? How can we ignore the suffering of those who suffer and cry in front of us?

At the end of the day, more than 9 hours later, we returned to the place. Some animals had already been taken, but many pigs were still there, clearly very injured.

A pig, probably with a broken spine, just fiddled with its nose in the dirt. Another, with his hind legs broken, tried to get up and walk, succumbing and lying down again.

And make no mistake: they were not rescued, as they will still be killed. The injured animals were taken to the trucks pulled by the ears, pushed, pulled by the paws (probably broken). One guy twisted a pig’s tail in such a way that his screams will never be forgotten.

It should also be noted that, when they realized that we were filming this violence, they turned off the truck lights and tried to get the GNR to expel us from the place.

There are not enough words to describe the horror that happened today. So we let the screams of these animals speak for us. Where’s our empathy ?! How is it possible that these situations continue to happen?
If you still eat meat from animals, this accident happened because you continue to give reasons for this industry to exist. Hear the screams of your “meal in Video”.

No animal has to die for you to survive.

And I mean…The next day, a pig that survived the accident was still at the scene.
More than 24 hours later.

Would an injured person ever be forgotten at an accident site?
No, never!
Because the law protects human animals.
There is no law to protect non-human animals.
Therefore, according to the law, these pigs are viewed as objects that have no right to life.

Many wondered how the accident happened, what was the reason.

The correct question is: Am I one of the REASONS for this accident? I, the meat consumer? Am I the one responsible for their hell life, their agonizing transports, their brutal death in the slaughterhouse?

We want this industry to be smashed in the next 10 years.
There is no point in fighting for “organic” farming, shorter transports, and larger cages.
You can only get out and use your personal behavior, your personal diet, to inflict the death blow on this death industry.

Stop eating animals and their products.
Stop cooperating with this fascist system of exploitation.

Ma best regards to all, Venus

This is a major blow to the industry, but there is still so much work to be done to expose the cruelty of animal agriculture.

I’m live right now breaking down what happened and what’s next.

Tune in and share the livestream to help us reach the world with this breaking news!

Thank you for all your support during this campaign. This is just the beginning. Activists are still on the ground in Iowa and we need your help to keep shining a light on Big Ag’s darkest secrets. Right now, all donations are being matched dollar-for-dollar up to $50,000. Please help us continue exposing this violent industry until we #CancelAnimalAg.