IMAGES of a seal that has been so neglected it has become covered in seaweed has led to calls for the zoo keeping it to be closed.
Animal rights activists want the small zoo in the Magdalena Peninsula, in Santander, Spain, closed immediately and have condemned it as a “throwback to the bad old days”.

Images of unhappy animals at the zoo have been circulating on Spanish social media sites and have led to a petition for its closure.
The animal rights group AnimaNaturalis says more than 6,000 have signed its letter of protest to Santander council.

The charity’s leader Aïda Gascón said that the seal covered in green algae “seems to be letting itself die” (!!!).
But opposition parties unsuccessfully tabled a motion before the city council demanding to shut the zoo.

Local councilor Daniel Fernández: “Those pictures convey an image of inconceivable and disgraceful treatment of animals when we see things like the sea lion pen with no water.
“This would be unacceptable anywhere in the world, but it is even more surprising in a city that wants to position itself as a tourist attraction.”

The seals have had no water generally from the sea, they can only swim in standing water, the consistency of which is already greenish and obviously dirty.

One woman even noticed that they were swimming a dead or sick seal on the water filled with grass and moss.

After the complaint, the Santander City Council assured that the dead animals had died naturally and that there were no animals that had been abused or lived under unfortunate conditions as they were all well looked after by veterinarians.

However, the videos leave their own and strangers speechless.

More than 27,000 people have signed an online petition on Change.org to close the Magdalena mini-zoo which was built in the 1980s.

Santander Mayor Gema Igual denied the animals were mistreated by the mini-zoo.
Ms. Igual, of the conservative Popular Party, said images of a grey seal had been taken out of context (!!!).
She said: “That photo was of a sleeping animal, and the dead sea lion was not in a place people could see it because it was known to be ill.” 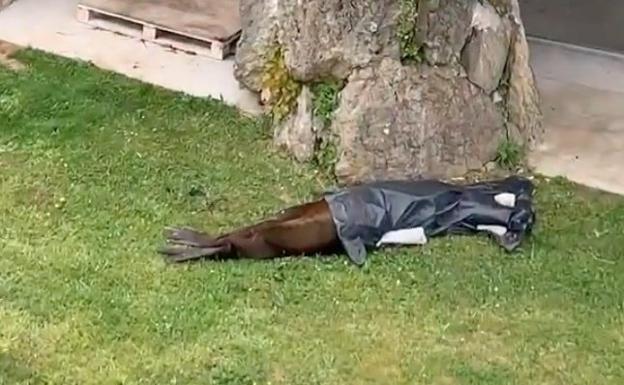 A dead sea lion half-covered by a plastic bag was in plain sight, Credit: AnimaNaturalis

As seen in a Twitter thread, the corpse of a seal appears wrapped in a garbage bag in full view of the people, and in the enclosure in which these animals swim, another in poor condition is seen, floating without diving into stagnant waters and with a layer of verdín or moss on its back.

The animals have no place, they are sick, apathetic, they do not look nourished and they also do not have the necessary water because it is full of sand, and worse, what is offered to the animals here is an ecosystem to which don’t belong at all. 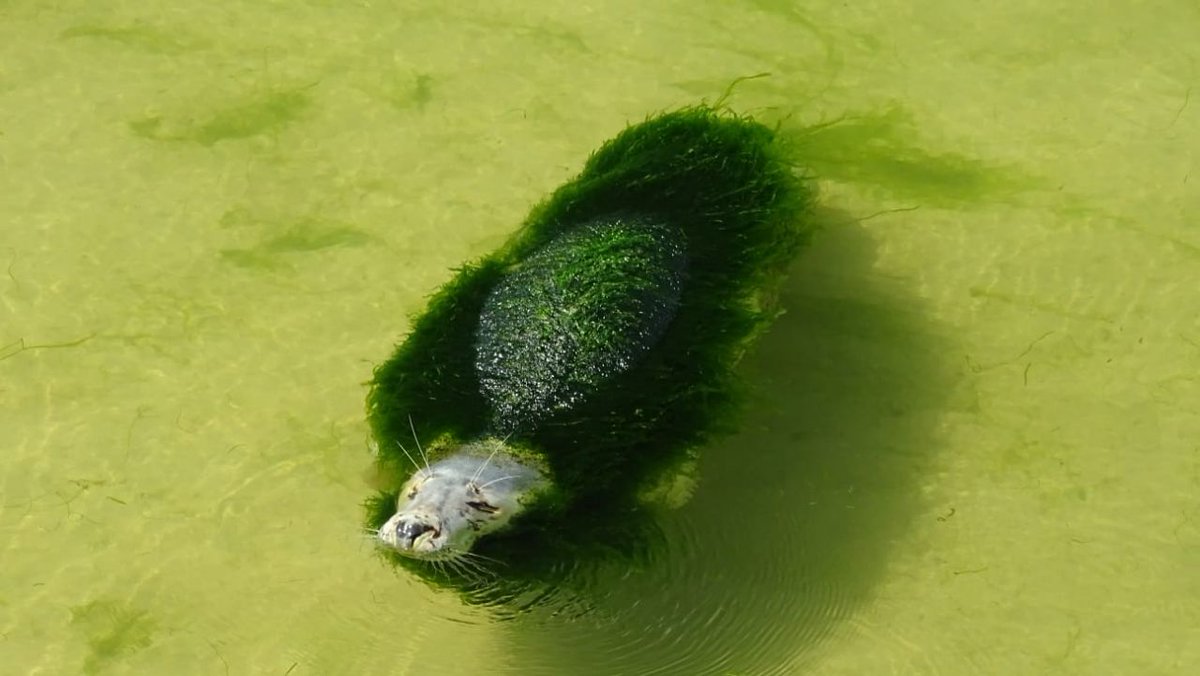 The council which runs the zoo says the seal had not been mistreated. Credit: AnimaNaturalis

That’s how (bad) captive Gray Seals live in the Zoo of the Palacio de la Magdalena in Santander.
The worst thing is that they proudly display them to tourists when their condition is worthwhile.

Locked in a small room, with hardly any water and with a layer of green on their skin.

And I mean…It was never and for no animal a species-appropriate life in the zoo.
Now the prison owners give up their inmates because they cannot make money with them.

In Germany, we are currently experiencing similar crimes in the zoos.

The corona pandemic has led to a crisis in (almost) all zoos around the world that is trying to survive the mandatory quarantine.
Some managed to get support, but others who got nothing refused to close.
This is the case in the mini -zoo in Magdalena Peninsula, Santander in Spain, a terrible situation!

“Seems to be letting itself die,” said charity’s leader Aïda Gascón.
And why don’t you do something to prevent it @ Aïda Gascón? Would you let your child die too?
The answer is because there is no profit from them at the moment!

The stupid visitors who co-finance this misery with their tickets stay away because of Corona, the zoo-business is bad, so some inmates have to fall a victim.

@Mayor Gema Igual, we demand that you close this place and rescue these animals urgently. We watch you!

2 thoughts on “The zoo in Magdalena Peninsula must be closed immediately!”