“If something is really important, you do it, even if the odds are not in your favor”.

The question is whether you want to tell your grandchildren that they can only see a certain animal species as an image in a book or on a computer or on TV because you didn’t have the courage to get up and change something.

There are already many animal species in our oceans that are extinct or are on the brink of extinction.

Without organizations like Sea Shepherd, who patrol the waters in collaboration with many governments and at the forefront, illegal fishing could wipe out many more species. It is the short-sightedness and greed of a few who drive this development, but it is the large mass of people who watch and make it happen. 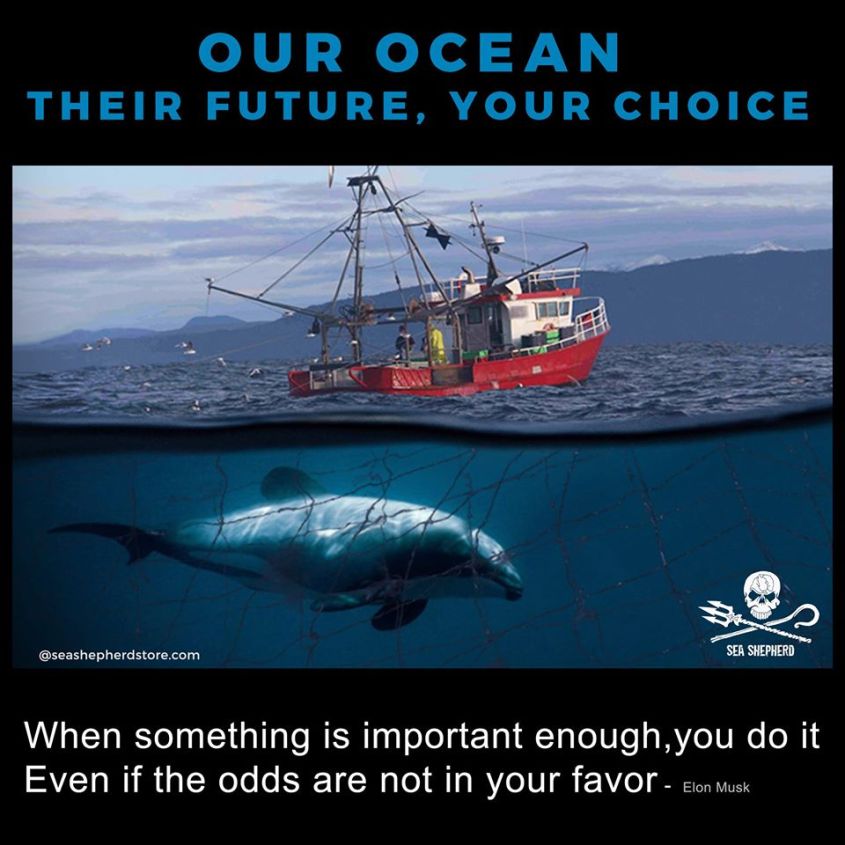 As far as we know, there are now less than 30 bottlenose dolphins in the Gulf of Mexico. Most of their fellows were killed as by-catches in the networks of illegal fishermen.

There are only around 55 Maui dolphins and less than 9000 Hector dolphins left off the coast of New Zealand. This means a decline of 80-90% of the stock in the past 50 years, mainly due to death from fishing nets and lines.

Both species have a very slow reproductive rate, with sexual maturity only being reached at 7 to 9 years. They have a calf only every 2 to 4 years and suffer from a high mortality rate among newborns.

In addition to refraining from eating seafood, you can submit petitions to strengthen marine parks and the legal protection of all marine life. Call for compliance with and enforcement of all existing laws against illegal, unregulated, and undocumented fishing.

Support organizations like Sea Shepherd that are at the forefront of IUU fishing and poaching.

Decide now to make a change because tomorrow it might be too late.

When I made a conscious decision to fight for animal rights and do everything possible to combat injustice against the “other” animals, my mother asked me one day:
“YOU will save the world?”
Today I can answer: “Yes! who else?”
Those who fight can lose, but those who don’t fight have already lost.