Ravens are considered to be particularly intelligent: They learn quickly and use tools purposefully. One reason the birds are so smart could be because of their long childhood.

Because some corvids stay with their parents for a very long time – and have so much time to learn even complex things in a protective setting.

Cognitive scientists from the German University of Osnabrück and the Max Planck Society have now investigated how clever they actually are.

They compared the physical and social skills of ravens with those of chimpanzees and orangutans.
It was shown that the tested ravens already had a comparable cognitive performance as great apes at the age of four months.

The study was published in the journal “Scientific Reports”.

The scientists wanted to find out, for example, whether ravens know where to find food. To do this, they hid treats in a cup that was hidden between other cups and moved back and forth like a shell game. The ravens pointed with their beak at the correct cup and pecked at it.

A total of eight ravens at the age of four, eight, twelve, and 16 months were tested in various task areas, in which, for example, spatial understanding and social behavior such as communication were tested. They mastered tests to understand quantities, cause-effect chains, social learning, and communication just as well as chimpanzees and orangutans!

“At the age of four months, raven children are already relatively independent and begin to be interested in non-breeder associations,” said research director Simone Pika from the Institute for Cognitive Science at the University of Osnabrück, Germany.

These are loose swarms of up to several hundred animals. Consequently, the young ravens would have to be cognitively prepared for these new challenges. Now, further tests are to be developed, in which species-specific skills are also included.

Ravens recognize faces – and in this way identify, for example, “bad” people five years after a trapping operation. Even ravens who had only seen the face once were afraid of those faces later.

By the way, ravens live with the same partner for a lifetime. Each year the couple raise two to five boys who are very carefully looked after by their parents.

But young ravens and crows quickly fall out of the nest and then hop apparently abandoned on the ground – which probably coined the expression “raven parents”.

But mom and dad Rabe are always close by, feeding and defending their offspring.

Ravens track down weak or sick animals, often days before the disease breaks out.

Ravens seem to have a sixth sense for weak and sick animals. Farmers have observed that days before a farm animal is diagnosed with pneumonia or diarrhea, it is already being attacked by ravens.

Corvids are the front runners among the feathered geniuses.

They can also plan for the future and carefully divide their food over several days or keep provisions. Just like us, humans, only without a refrigerator!

Common ravens can even speak if individual sentences are spoken to them long enough. The dialect of her teacher can also still be recognized. The ravens do not understand the content of their words.

Not yet – at least this has not yet been proven. 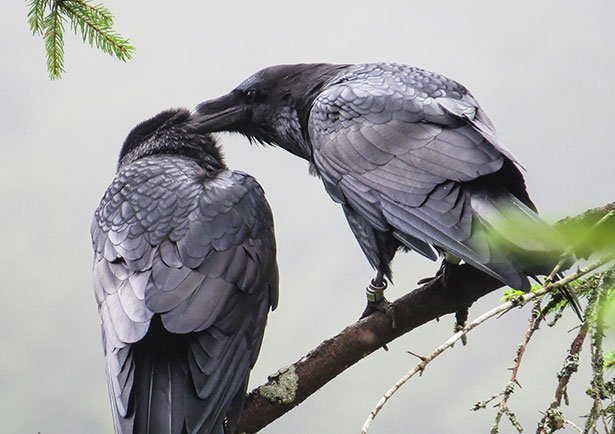 And I mean… The EU Birds Directive stipulates:
(…)
Art. 8: “Prohibited hunting methods: With regard to the hunting, catching, or killing of birds within the framework of this directive, the member states prohibit all means, facilities or methods by which birds are caught or killed in large numbers or indiscriminately or which in certain areas May lead to the disappearance of a bird species, in particular the means, facilities and methods listed in Annex IV letter a)”.
(…)
“Annex IV of the EU Birds Directive lists poisoned bait, blinded or mutilated live birds, night vision devices, etc. also explicitly named trap traps”.

In Germany the hunting season for ravens is allowed from August 1st to February 20th, they can be hunted by the hunters. Live traps are prohibited.
But traps for ravens and birds of prey are legally offered on the Internet.

Like everything in the hunting business, this has to do with hypocrisy and lobbying.

The pursuit palette ranges from shooting and shooting nests to poisoning and trapping: either with manslaughter traps such as Gooseneck or leghold traps (possession permitted, use prohibited) or live traps with decoys (e.g. Nordic crow mass trap with a live decoy pigeon).

On the top, these traps have one or more openings that allow a bird to get inside, but then, like a fish trap, cannot find it again. The opening is always provided with rungs and looks like a ladder that is mounted on the “aviary”.

Inside there are either meat baits or live pigeons, crows or magpies. These decoys can be used to catch both predatory birds and corvids.

The ban on trapping birds also applies to the latter, so this type of trap is always illegal.

There are practically no controls for hunters in Germany. In other countries, forest or environmental police have been set up, but in Germany, the hunter can do what he wants.

Of course, there is the Federal Hunting Act and other laws to be observed. But it works like in almost all areas of life: where there is no plaintiff, there is no judge…