It is said that some animals “only lack language”, and this must certainly be true in the case of many dogs and cats who delight our days with their presence in the house, and also with regard to the protagonist of this story:

A 500 kg cow fled the slaughterhouse and took refuge in the next church. Was she looking for a way to shout, “Help save me!”
We may not know, but from the way the news sounds, it actually seems that the great beast has entered the church as if it were almost going to “pray” for its life.
Needless to say, the slaughterhouse staff tracked it down and took it back. 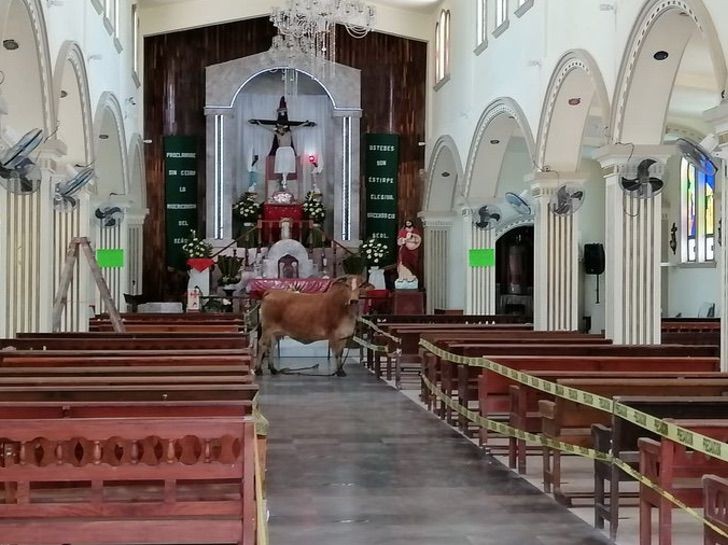 In order to escape her tragic fate, the cow fled, which was now aware of what to expect after the staff of the slaughterhouse had pulled her out of her stable with ropes until she took refuge in the church “Signore della Misericordia” in Mexico, took place in the city of Tampico Alto.
It remained hidden for several minutes without anyone being able to track it down.
In the end, the slaughterhouse staff arrived at the church and recaptured the animal that in those few minutes had perhaps hoped to save its life.

The photo immediately went viral on Twitter, where many users expressed their regret over the fate of the cow.

Some even wrote that the poor animal was in the process of “asking God for help” at that moment, while others wanted to let it be known that they had adopted it just to avoid such a sacrifice.

A certain user wrote that the cow should absolutely not have been killed because it was clearly “a sign from God”.

Whether or not it was a divine sign, there is no doubt about the regret for the poor cow.

And I mean…“Lord of Mercy” was the name of the church?

Then this Lord should appear in person and teach the cretins from the slaughterhouse a lesson on how someone has to behave in his house
Churches are places where the message of peace and compassion is preached. Getting in there by force is sacrilege.

The church asylum grants temporary admission to refugees who are threatened with torture, death, or inhumane hardship.
And meanwhile, it has become a certain humanitarian tradition.
For human animals!

Already in ancient times, there was a tradition of protecting people in holy places such as temples, tombs, or holy groves, especially when it was not clear whether they were guilty or not.

In the case of the Mexican cow, it was absolutely clear that she was innocent.
Her only “crime” was that she didn’t belong to the ruling species, which means she had no right to protection in the church.

And the Lord of Mercy does not deal with individuals without rights.