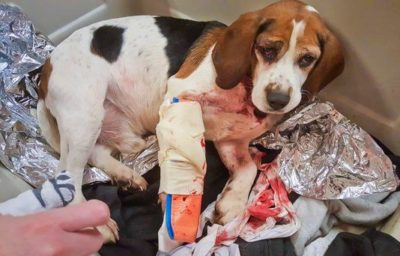 Goal: Find and punish the driver who threw two dogs from their car onto the roadside.

Two innocent dogs were seen flung onto the side of the road from a car, much to the horror of a passing trucker who immediately stopped to call for help and attend to the poor creatures. Both dogs survived with horribly injuries, and one’s leg had to be amputated. The driver of the car has yet to be identified or caught.

Even the survival and rescue of the dogs cannot erase the act of cruelty committed against them. There is simply no excuse to throw living creatures from a moving car; not only is the abandonment of an animal against the law, but these dogs were abandoned in a particularly cruel and inhumane fashion. Frankly, it is a miracle that they survived the impact, even more so that their rescuer was able to get them the care they needed in time. Many situations such as this one do not end happily.

The person who so cruelly abandoned these poor dogs cannot be allowed to get away with it. They must face the consequences of their actions as soon as possible. Sign this petition to ensure the capture and punishment of this person immediately.

A driver was caught throwing two dogs from their car and leaving them on the side of the road to die. While an approaching trucker thankfully stopped to aid them and call for help, the dogs suffered many injuries and one even had to have his leg amputated due to the severity of its breakage. The dogs both survived, but the driver who so cruelly abandoned them has yet to be found.

You must ensure that this person does not get away with abandoning two innocent animals in such a cold, inhumane fashion. Many animals in such a position are not as lucky as these two were, but their survival and rescue does not erase the atrocity committed against them. Find, apprehend, and ensure the punishment of this person as soon as possible. They must face justice for what they have done.