Not only in Europe, more than 53 million wild birds are legally shot down by hunters each year, but also in other countries.

Several countries on the Mediterranean are famous for mass killing of migratory as resident birds. Lebanon is no exception and perhaps one of the worst culpits.

The estimated number of illegally killed birds in Lebanon is more than 2,600,000 annually.
Several storks on their way to Europe took a route between residential areas due to an unusual wind.
The hunters of Beirut shot them from the streets, the balconies and the roofs of the houses! A terrible slaughter took place!

We have received terrible pictures.

The images provided were taken in spring 2017 are from “Association for Bird Conservation in Lebanon” and give a glimpse of the situation.

Some Lebanese hunters and a terrible loss of wildlife

Every spring hundreds of thousands of white storks and other birds migrate north to where they breed. About 530,000 white storks use the eastern flight route, a shortcut across the Mediterranean, according to a message from Stop Hunting Lebanon from 04 March 2019.

The slaughter was so terrible that the Ambassador of an Eastern European country sent a complaint to the Lebanese President about the killing of this beloved breeding bird.

Everything that moves will be shot, including these two pelicans

Normalised in society, illegal shooting and trapping has become an extremely popular pastime in Lebanon.

Along the east-west roads, every twenty meter stands a hunter, who fires on every bird silhouette that flies over him. This sport is practiced by everyone, from rich to poor. Still mainly by the Christian Lebanese.

In Lebanon, these migrations of birds have sustained the growth of a widespread hunting industry that has remained largely unregulated for decades.

Excessive and unlawful hunting practices make the country one of the most dangerous areas for traveling birds that often journey thousands of miles to roost and mate.

These include endangered species, which are among the estimated 2.6 million birds that are shot or illegally trapped in Lebanon on a yearly basis.

By 1933 Lebanon was under French mandate and French influence. Hooves we have more to say? Traditionally fond of rifles, the Lebanese plunged themselves to full surrender to the hunt. 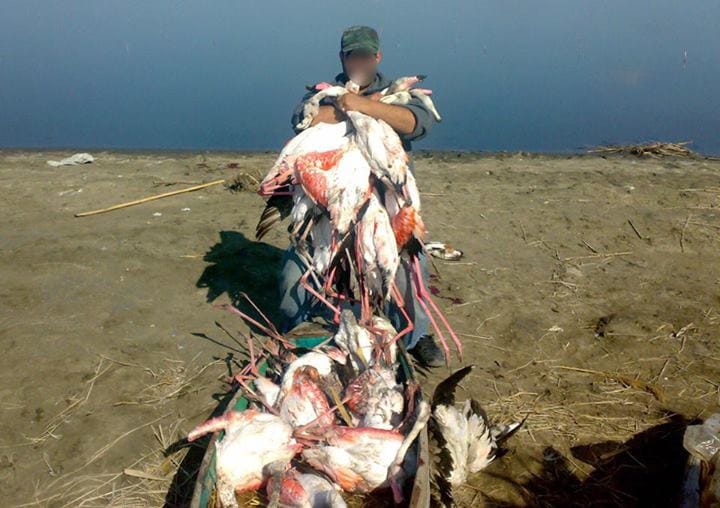 A Lebanese hunter with a boat full of dead flamingo’s

During the time that the birds migrate, cars full of hunters drive along the mountain roads or are lined up. Ready to shoot all what moves within their distance.

My comment: Numerous dangers make life difficult for the white stork: not only habitat loss and many toxic chemicals, but also hunting.  Criminal and unlawful hunting practices make these country one of the most dangerous areas for traveling birds, often traveling thousands of miles to mate.

Hunters, poachers, bird catchers and pet traders, all these insane killers are threatening our migratory birds everywhere along their migration routes. Whether in Italy, France and Spain, in Malta and Cyprus, in the Balkans, Greece and Egypt and probably other countries as well, no matter how big or small, our birds are caught, tortured, shot down.

Theoretically, bird hunting is banned in the EU, but it will still be preserved “as a tradition” and in France they even want to increase the “catch quota”!

Once again, we witness the coalition between gangsters and governments.

3 thoughts on “Lebanon: the slaughter of migratory birds”