28/6/20 — Spreadable Vegan Cheeses Made From Almond Milk To Debut In Major U.K. Retailers 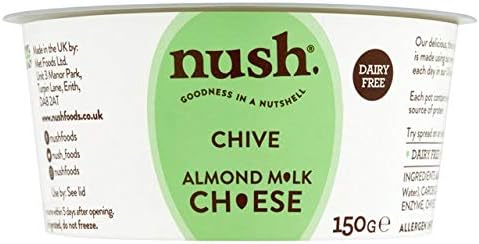 ‘Nush is a category innovator and so we are really proud to be the U.K.’s only live vegan almond m*lk cheese’

Spreadable vegan cheese from Nush is to debut in major U.K. retailers Sainsbury’s and Asda.

The company’s products, which are made from almond milk, are fortified with vegan probiotic cultures and come in two flavors: Natural and Chive.

Retailing at £2.75 per tub, Nush’s cheese is also free from preservatives, additives, gluten, and soy.

In a statement sent to Vegan Food & Living, co-founder Bethany Eaton said: “We are delighted to be listed by Sainsbury’s and Asda stores nationwide with our range of dairy-free cheese spreads, reaching the growing market of people across the U.K. who are wanting a healthy alternative to dairy cheese.

“Nush is a category innovator and so we are really proud to be the U.K.’s only live vegan almond m*lk cheese. There is growing demand for dairy-free cheese and through our range, British consumers can enjoy a delicious vegan offering that contains 30 percent pure almonds.”

Earlier this year, Nush launched its vegan cream cheese in more than 200 Marks & Spencer stores across the U.K.

“We’ve been working so hard to make our delicious cheeses available across the country and are so excited that more people than ever before will be able to try them! We hope you find a store near you very soon!” the company wrote on its website.

So we can now move completely away from this  – gentle cows turned into industry milking machines; who have their babies stolen from them a matter of hours after being born:

to a completely dairy free cheese.