On the Greek island of Santorini, donkeys and mules are used as taxis to carry tourists up and down more than 600 steps to the old town of Firá several times a day. 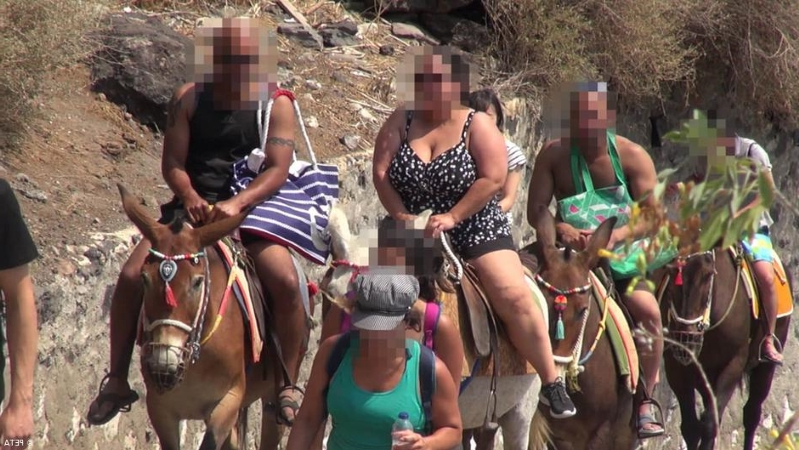 Santorini officials refused to run adverts from PETA which highlight the suffering of donkeys and mules used as “taxis” on the Greek island.

PETA Germany has refused to be silenced and has bombarded neighboring ports, ferries, taxis, buses, billboards, and cargo bikes with a powerful campaign.

Over 100 adverts reading “Help stop cruelty: please don’t ride the donkeys and mules!” are now visible in the popular Greek coastal towns of Rafina and Piraeus.

The campaign follows a recent PETA eyewitness exposé revealing that handlers drag animals down steps and whip and hit them with sticks to make them continue walking.

Donkeys and mules were observed suffering from open sores, raw skin, and bloody injuries caused by their ill-fitting and makeshift saddles. Some animals were forced to wear tight muzzles with sharp wire ends that could easily injure them as well as humans.

Under these laws, animals must have access to water and protection from the weather, but many of those used for rides are tied to a wall or rail for hours in the blistering summer sun with no access to water whatsoever. Some try desperately to find shade.

These conditions are illegal but apparently tolerated by the authorities.

“It’s a disgrace that gentle donkeys are being marched into the ground as they’re forced to work day in and day out with no relief from the hot sun,” PETA Director Elisa Allen said in a statement sent to Totally Vegan Buzz.

“PETA is calling on tourists to avoid these cruel rides while urging Greek authorities to step up and stop this abuse.”

A new law passed this year prevents donkey and mule owners in Santorini from burdening their animals with weights exceeding 100 kilograms. 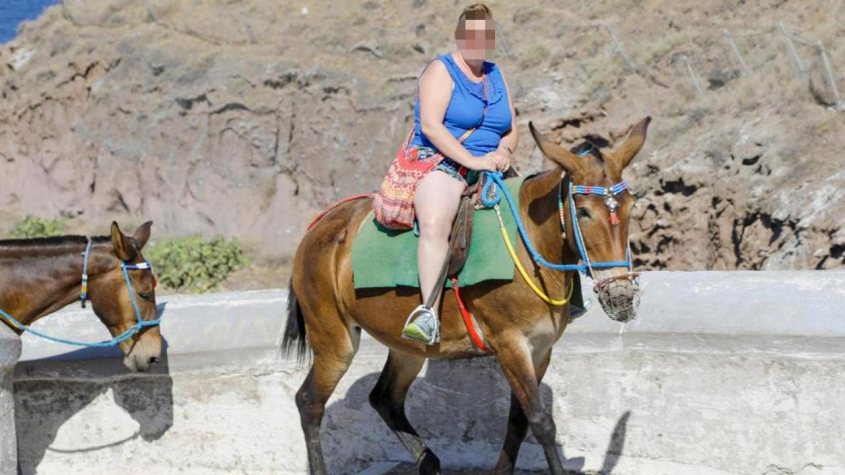 But profit-driven owners often allow heavier riders, placing a great strain on the animals’ backs and joints. This has grave consequences for the donkeys. If they become too weak to carry on with their “work,” they’re often abandoned and left to die.

Many tourists who ride the donkeys seem not to know what they’re doing, and some handle them inhumanely. People have been observed digging their heels into their sides. When the donkeys stop on the steps, the owners often use sticks or whips to drive them on. In one instance, a driver first yanked the animal by the reins then violently beat him with a stick.

When they are not being made to carry heavy loads on their backs, the video reveals how the donkeys are often tethered in the blazing sun without access to water or shade and are unable to move their heads away from bothersome flies.

Even at night, some donkeys on Santorini get no rest: they’re forced to haul heavy bags of garbage. 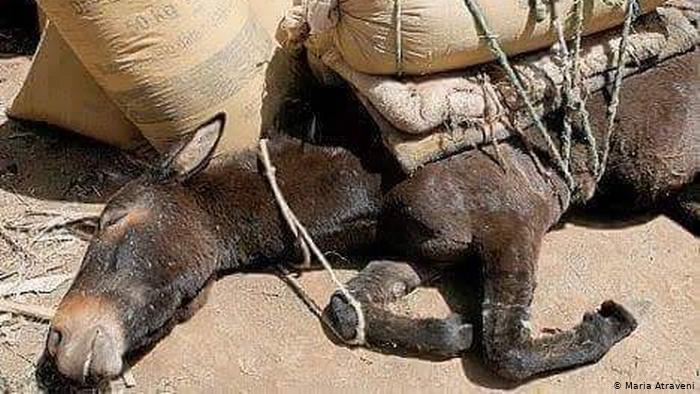 Please sign our appeal to the Greek minister of agriculture: https://headlines.peta.org/suffering-continues-donkeys-santorini/#action

And I mean…around 360 donkeys and mules stand at the port of Santorini every day and wait for the large cruise ships full of tourists to take them around 600 steps from the port to the small town. Their owners sell the ride on the animals for five euros as a special experience and make good money with the holidaymakers.

For years, animal rights activists on the island have complained that the animals have to work too long, carry too heavy loads, get too little to eat and drink – and have been exposed to the scorching sun for too long. But nothing has happened since then.

On the contrary: animal rights activists are not popular on Santorini.
In 2018, when they demonstrated against the cruel shuttle service, they were brutally attacked by donkey transport operators.

Animal rights activists say: ” the business with tourists is just the tip of the iceberg of criminal acts. We are currently gathering incriminating evidence against local authorities. ”

Meanwhile, the local slave keepers refuse to restrict their donkey rides. They claim that their booming business even maintains the endangered original tradition of Santorini (!).

The abuse of the animals continues because no keeper has been punished so far.

2 thoughts on “Greece: the misery of Santorini’s donkeys”